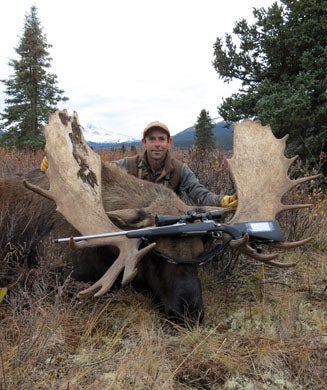 Everything used in Reg and Ray Collingwood’s camps (www.collingwoodbros.com) gets there either on horseback, on a jetboat, or in the cargo hold of a backcountry plane. Here, we load essentials–groceries, toilet paper, and guns–into a Cessna Caravan for the 210-mile flight from Smithers, British Columbia to the Collingwood Brothers base camp at Hyland Post, an old log-cabin trading post on the banks of the Spatsizi River that serves as the home base for Collingwood’s various hunting camps.

No plane trip into the wilderness is wasted. The airplane that brings us in is immediately prepped to take out hunters from the previous week. What I see–bags of moose and caribou meat and some truly remarkable antlers–encourages me for my own hunt. I’ll be in the Spatsizi for the next two weeks, with tags for moose, mountain caribou, grizzly bear, and wolf in my pocket.

My cabin at base camp. I won’t be here long. Soon after I settle in I learn that tomorrow I’ll be riding a saddle horse more than 20 miles to the moose spike camp.

And I have another surprise. Shortly after I sight in my rifle, a Savage Model 116 chambered in .300 Win. Mag, my guide, a French-Canadian cowboy named Max Gauthier, finds me to tell me to get my rifle and hunting pack together. We’re going to hike above Hyland Post to see if we can find a bull moose that had seen a few days prior. We climb above the airstrip and call to a lone cow. It’s the height of the moose rut, and wherever you find cows, rutting bulls should be nearby. Here, Max displays his homemade moose antlers while he grunts. But his performance gets no attention. There’s no bull within earshot.

The next day we prepare our pack string for the trail. Here, Max balances panniers that we’ll load on the pack stock.

Three of us saddle up for the trail: Max, myself, and our wrangler, Tania Millen. Here, Millen leads her part of the string across the Spatsizi River. We have enough gear and groceries to stay out for 9 nights. Just how long we spend in spike camp depends on the amount of game we see, and collect.

It’s hard describe just how big this country is. The best way to measure it is in the context of our mode of transportation. We rode a full day to reach our spike camp. But the area we’ll be hunting extends another two days horseback ride. There’s not another hunter in this entire drainage. But the epic scale of it puts a premium on good optics. Max and I spend a lot of time behind our binoculars, both in the saddle and on the ground.

On our first day of hunting, Max and I were planning to ride half a day and glass an immensity of blueberry bushes for bear. But we were only about three miles from camp when I looked to my right and spotted a pair of creamy antlers against a dark spruce tree. A second look confirmed they belonged to a good bull moose. How good? I had to bail off my horse, Amos, for a closer look. Max confirmed that he was a great bull, and after I put two 180-grain Federal Trophy Copper bullets into him from inside 200 yards, I could see up close just how big his antlers were.

He’s a grand old bull, and one of the largest mammals I’ve brought to earth. It takes some real horsepower to move his carcass so we can position him for photos and start taking apart his quarters.

We tape his spread at 59-5/8 inches. Since then, I’ve been rounding up. A 60-inch bull is the gold standard of trophy moose from this part of B.C. He’s simply immense, with huge double 4-point fronts and paddles that extend way beyond the length of my rifle.

Time–and daylight–is going fast, so we make quick work of our other chores: tagging the moose and removing his quarters, backstrap, and tenderloins. We have no pack horses with us, so we’ll have to return in the morning for the meat. We cut branches from nearby aspen trees and build simple platforms for the quarters. They allow the cool night air to circulate under the meat and cool it down. We hang vests above the carcass. Both Max and I are nervous about leaving so much meat in the field, where it’s easily available to bears, wolves, and even wolverines.

But we return early in the morning to the welcome sight of unmolested meat. It’s cooled down beautifully, and so we begin the welcome chore of packing heavy quarters in panniers. Here, Max and I “short-quarter” the hind sections, cutting away the lower leg bone.

We pack the meat–well over 300 pounds in all–in panniers on two horses, and add the rack to the top of Archie’s load.

Back at camp, I prep the skull and rack for a European mount. While this is my largest moose, I resist the urge to cape him out for a shoulder mount. To my eye, a skull mount shows off the size and nobility of a moose better than the bulbous nose and pendulous dewlap of a big bull.

We hunt a few more days for grizzly and caribou, but that experience is the stuff of another gallery. With full packs of moose meat, the return ride to Hyland Post is slow.

And it ends with another crossing of the Spatsizi River. To my mind, there is no more classic big-game scene than this: leading a pack horse laden with meat and antlers across a big wild river.