New Brunswick native Keith Comeau only had one moose season under his belt when he drew a tag this year.... 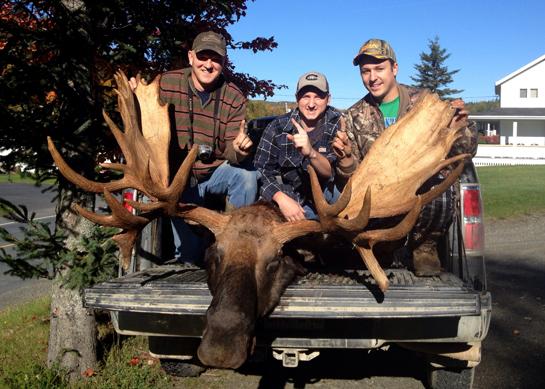 New Brunswick native Keith Comeau only had one moose season under his belt when he drew a tag this year. But that didn’t stop him from taking a 1500-pound monster bull with a 66-inch spread. On September 26, Comeau and his brother-in-law shot this moose in St. Quentin, New Brunswick. Now Comeau has a new wall mount and a likely Boone and Crockett Club record for the third largest Canada moose ever taken in the province.

Last season Comeau teamed up with his father-in-law to take a bull with a respectable 42-inch spread. This year Comeau, 30, finally pulled the moose tag he’d been hoping for since he turned 18. Four days before the season started, Comeau headed to northern New Brunswick with his in-laws to scout the public land they’d chosen for the hunt.

After hours of luckless searching on opening day, the hunting party returned to a location where they’d tried a cow call earlier. They drove up on a big cow just after 10 a.m. She ambled away downhill, and the group decided to circle around the woods and cut her off. Upon arriving at the bottom of the slope, however, the hunters spotted four cows and one massive bull in an opening 70 yards uphill.

“My first reaction was, are we going to shoot?” Comeau said. “We could see the antlers were big, but I’m not that experienced at seeing a bunch of bulls and saying, ‘Yes this is big, we’re going to shoot.'”

Comeau and his second hunter, brother-in-law Charles Levesque found clear shots and gave each other the go-ahead. Comeau aimed behind the shoulder and squeezed off two rounds with his .300 Remington Magnum. Levesque followed with a round from his .30-06. The moose stepped sideways and Comeau fired a fourth shot. The bull dropped.

Comeau and Levesque moved toward him, but the bull rose and ran uphill. The pair finished the bull off 265 yards from the spot they originally found it.

As the group approached the bull, they realized they were dealing with an exceptional animal. “I was just screaming like a kid, howling,” Comeau said. “It was basically a mix of expression and words that just didn’t quite make sense, but we all understood each other.”

The bull was rough green scored at 209, and officially green scored at 200 6/8 inches. The current first, second, and third place B&C records for Canada moose taken in New Brunswick are 216, 212 3/8, and 204 6/8 respectively. Comeau’s bull will likely be the sixth or seventh ever taken in the province. The world record Canada moose measures 242 inches and was taken in 1980 in British Columbia. That bull had a spread of 63 inches.

See photos of the Top 40 Biggest Moose Ever Taken.