The Truth About Hunting Whitetails in Wind

Hint: It's not a waste of time 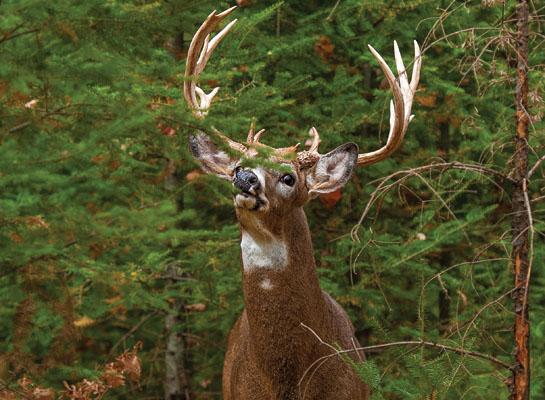 There’s a long-held belief that hunting whitetails in high wind is a waste of time. This conclusion is largely drawn from anecdotal evidence. Hunters don’t see as many deer when the wind is blowing, which must mean that there are fewer deer on the move, right?

Science disproves this. In a seven-year study, scientists at the Samuel Roberts Noble Foundation in Oklahoma found that there was very little change in the distance traveled by whitetails as a function of wind speed. For this study, deer were fitted with GPS collars and their movement was monitored every 15 minutes throughout the spring, summer, and winter. Whitetails tend to move most at sunrise and sunset, and the evidence from the Noble Foundation verifies that deer activity was highest at these times regardless of wind speed or direction. Wind affected deer movement in only a few instances. In fact, temperature, barometric pressure, and humidity all played a more significant role in deer movement than did wind.

This is not to say that wind didn’t affect the pattern of deer movement. In the Oklahoma experiment, changes in weather affected deer movement more during non-peak periods than they did during normal hours of crepuscular movement. But by and large, deer were moving at dawn and dusk regardless of wind speed.

This indicates that the old adage that deer “stop moving” during periods of wind is, for the most part, false. Deer are moving–you just have to know where to find them.

Rethinking Habitat Preferences
Deer lead fairly simple lives. They must find sufficient food and water, avoid predators, reproduce, and minimize environmental stresses. These requirements motivate all deer movement, so understanding how wind causes deer to change their patterns is elemental for achieving success as a hunter.

Wind limits a deer’s ability to detect predators, but perhaps more important, fighting heavy winds increases deer’s stress and caloric output when they are foraging and traveling. Therefore, in periods of high wind, deer change their pattern of movement to minimize their exposure to the elements and predators.

Hunters can capitalize on this tendency by focusing on areas that are sheltered from strong winds, particularly areas near bedding sites. In such cases, high winds may actually be a benefit if the hunter has scouted areas ahead of time and located those windy-day sanctuaries.

Here are some wind wise tactics:

1. Abandon the Stand
Don’t count on deer moving past your tree. Instead, get on the ground, where high winds will cover your sound and movement. A stiff head wind nearly guarantees your scent will stay behind you.

2. Understand Shelter
Hunt anywhere a deer can move from bedding to feeding areas without being exposed to heavy gusts. South-facing slopes are often good places to look.

3. Map It
On an aerial map, indicate with different-color markers which areas will be sheltered in winds from various directions. You can see at a glance where to hunt from day to day.

4. Get Low
Bowls, valleys, and drainages are your best bets on windy days, especially if they are protected by trees and other natural cover. Tree lines near bedding areas are prime spots.

5. Understand Thermals
The wind appears to be blowing sideways, but air is also going up and down. Thermals rise as the day warms and fall in the evening. Hunt high in mornings and low later in the day.