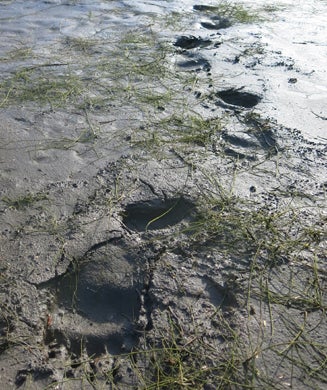 Unlike the moose and caribou hunts, which took place on horseback and miles from an internal combustion engine, we board a different means of locomotion for bear hunting. I’m hunting with the Collingwood Brothers (www.collingwoodbros.com), and their main bear camp is along the remote Spatsizi River. We will access bear areas via a jet boat.

We’ve budgeted several days for this hunt–it actually turned into a full week–and on the front end, I had two companions, outfitter Reg Collingwood, left, and guide Max Gauthier, photographed here as we jet up the Spatsizi River.

Jet boats are loud, and the scream of the motor seems to intrude on this wild country, but the craft is the best way to move up and down the river. Our destination is about 35 miles upstream of base camp, through stunning country.

We reach our destination, a wall tent located between mountain slopes loaded with blueberries and mossberries. This is where bears are feeding in the weeks before winter descends on the Spatsizi Plateau. I will spend a full week hunting out of this tent.

And cruising the shallow, rocky river in this boat. Note the Teflon armor on the boat’s hull. It’s to skip over shallow gravel bars that define the river during this low-water season. Navigating this river isn’t for tentative, inexperienced drivers.

Our main method of hunting is to spend hours behind spotting scopes, scanning distant mountain slopes for bears.

The weather is touch-and-go, and when clouds descend to the lower slopes, glassing is difficult. So any time the clouds break, we stop the boat, set up scopes on a gravel bar, and pick apart the timber and berry patches for bears. We spot a few smaller griz, but nothing we want to go after.

This country is impossibly huge, and trying to find a handful of grizzly bears in it is daunting. We know bears are in the area based on the fresh tracks we cut every day, but seeing one in the open is a difficult task. The days tick away.

Of course, we could just set up on any of the several hunter-killed moose carcasses that are strewn up and down the river. Here’s the carcass of a bull killed by one of Collingwood’s hunters earlier in the week. It hasn’t yet been found by grizzlies, but we spend a good deal of time inspecting each one. In BC, it’s illegal to hunt over a carcass–it’s considered baiting–but we hope to intercept a bear moving between berry patches and carrion.

Tracks of a dandy griz. Note how the toes cant inward. That’s one sign of a large bear. Of course, the other sign is the size of the tracks. We measure these at 8 inches across. That’s likely a 9-foot grizzly bear, a huge trophy for this area.

Max has to leave, but Reg and I continue to hunt miles and miles of riverside bogs and lakes. We find this weathered moose skull and rack near a swamp that’s frequented by grizzlies.

And frequented by wolves, huge wolves. This is the most game-rich place place I’ve ever hunted. From one point, I see Stone’s sheep, mountain caribou, mountain goats, moose, trumpeter swans, thousands of green-wing teal, harlequin ducks, and the tracks of grizzly bears and wolves. But for all that abundance, we still can’t put our eyes on a trophy bear.

Moose, however, are everywhere. Here, Reg and I stalk a big bull. Reg grunts and holds his arms out to mimic the rack of a young bull.

The old bull watches us cautiously, but stands his ground. Finally, he tires of the game and lumbers off into the timber.

After 8 long days of hunting bears, it appears we will be successful. A big boar is hitting a moose carcass miles below our tent camp. Reg and I float downstream in the dark, using his homemade paddles to navigate the motorless jet boat. But when we get to the spot, the bear is gone. We wait hours in the pouring rain before leaving.

It’s time to confront reality. The weather is disintegrating, making glassing mountain slopes impossible. I’ve already missed my bush-plane flight out of camp, and unless we quit now, I’ll either have to ride a horse 80 miles out to the Alaska Highway or ride a jetboat 110 miles down to the nearest take-out. Reg and I strike our camp and prepare to boat down to base camp.

This is our last look around before the weather settles in and snow and rain cover the mountains. I don’t want to leave, especially without getting a shot at a bear. But it’s impossible to control or even predict the weather in this huge, wild, gorgeous country.