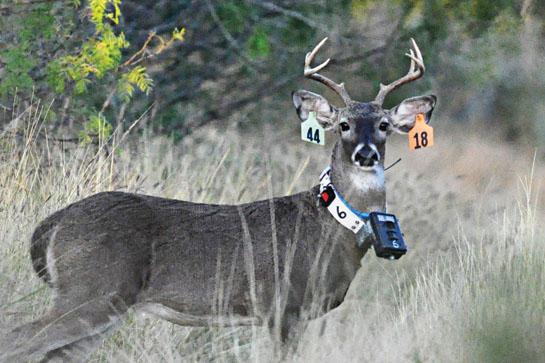 If you’re a deer hunter, you’ve probably spent countless hours waiting for your dream buck to arrive, wondering where he is, what he’s doing, and even if he knows he’s being hunted.

Doctoral student Justin Dellinger is gaining what amounts to “first-ungulate” information about deer behavior and habitat preferences, and even how they react to predators, from video cameras strapped around the necks of mule deer and whitetails in northern Washington State.

Dellinger’s project is on the leading edge of a new wave of wildlife research, one that uses high-definition point-of-view cameras to record animal behavior well away from, and out of sight of, humans.

“We place the cameras on collars, which we attach to deer at the beginning of winter, after hunting and breeding seasons, and pre-program them to record from 7 a.m. until 4 p.m. every day,” explains Dellinger, who studies at the University of Washington. “After three months, a timed release ejects the collar, which emits a signal that we use to find and retrieve it. We then download the data stored on the camera’s card.”

Since 1996, lead engineer Mehdi Bakhtiari has been perfecting the cameras that were developed for National Geographic’s Crittercam program (national?geographic?.com/?animals/?crittercam). The devices are now being used to remotely monitor nearly 50 species, from African lions to polar bears. Alaska Fish and Game biologists have strapped the cameras to grizzly bears to study moose predation.

“Camera collars have changed the whole concept of monitoring animals,” says Bakhtiari. “They allow you to see not only what each animal does, but why it does it.”

A GPS antenna is placed at the top of each collar, and a bezel holds the camera box in place, ensuring that the lens is always pointed outward. The units can capture a field of view of up to 180 degrees and about 80 hours of video footage. Dellinger can study not only how deer respond to predators, but also how they use habitat, how they spend their time (resting, walking, or running), and even what they are eating. A sensor enables a viewer to tell if the animal is looking up, down, left, or right, while a GPS chip pinpoints a deer’s exact location and can be used to calculate how fast the animal is moving.
In the second year of a four-year study, Dellinger is already seeing how the information collected can be used by both scientists and deer hunters.

“You can find out how each animal budgets its time,” says Dellinger. “I have a guy who’s in his 70s who helps us capture deer. After watching five minutes of video, he said he learned more about deer behavior than he had in all his years hunting.”

For example, studying video footage of whitetails will show hunters where and how much time a particular buck spends on each activity. Hunters could also potentially see how the deer reacts to the presence of predators. One deer might respond by hiding in dense cover; another may flee its home range.

Just don’t think that watching a few minutes of Dellinger’s videos will make deer hunting like shooting fish in a barrel.

“One major thing I’ve learned is how unique each deer’s behavior is,” Dellinger says. “Each deer has its own preferences, which affects how and where it spends its time, and how it responds to potential threats from predators. I had this one buck that became alarmed by something in the distance, and it stood perfectly still for more than 20 minutes. It turned out to be just another deer. Hunters need to keep in mind that it takes a lot of hard work to learn to pattern a particular deer.”