I’ve dreamed about hunting eastern Oregon’s sage country for nearly all my life. So when I had a chance to... 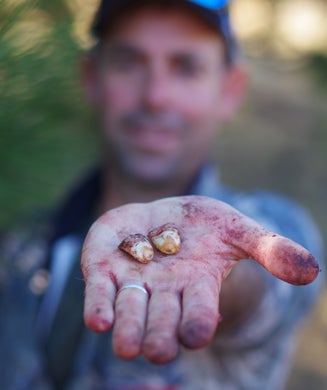 I’ve dreamed about hunting eastern Oregon’s sage country for nearly all my life. So when I had a chance to hunt elk in the John Day River drainage this fall, I jumped at the opportunity. It turns out the country contains a lot more than elk.

This is a painting on the wall of my host David Morris’s house outside the crossroads town (actually, two houses) of Ritter, Oregon. It is nearly identical to the painting that hung in my boyhood bedroom, to remind me of a life that might have been.

See, when I was a kid, my parents nearly bought a ranch outside John Day, Oregon. For financial reasons that were way beyond the comprehension of a kid of 6 or 7, we didn’t manage to buy the place, but for years afterward my dad, a red-dirt Missouri farmer, would wistfully recall the ranch in eastern Oregon’s high desert. “Not a big place, just a hay operation, but it was a turnkey deal,” he would say with a touch of regret in his voice, usually when we were repairing a tractor or a fence on our scruffy farm. “Handsome country out there. You coulda grown up in the sagebrush and the pines.”

That longing my dad had for a Western ranch stuck with me as a kid, and I often pictured myself, not hunting squirrels in the shagbark hickory trees, but elk in the ponderosa pines. Here’s what the John Day country looks like from a high ridge.

But we’re not here to reminisce. I’m here on the Middle Fork of the John Day River with my friends from Bushnell to hunt elk, and we have the good fortune to be here on opening morning of Oregon’s rifle season. My buddy Paul Arnhold, who handles public affairs for Bushnell, and I drop right in on a herd of several dozen elk. They feed toward us, and we wait. The wind is right. Turns out the herd is nearly 200 strong, and we are pinned down by elk feeding, mewing, and even bugling all around us. I have only one shot, at this 5×5 bull. There may be a larger bull in the herd, but I figure I’d better take the shot offered me rather than hold out for a shot that may not materialize. It’s wisdom I’ve gained from years of hunting elk, and I don’t regret dropping this good bull.

I’m carrying what may be the ultimate elk rifle: a Weatherby Mark V chambered in .300 Weatherby Magnum. The cool thing about this rifle is that it’s the first generation of the marriage of Weatherby’s excellent Ultra Lightweight line with their Range Certified line. So you get a light, hyper-accurate magnum rifle. I topped my rifle with a Bushnell Elite riflescope in 4-16×40. A classic big-game configuration.

I pull the whistlers out of my bull’s jaw. He’s probably a 3-year-old Rocky Mountain elk.

I’m tagged out within hours of the season opener, but it’s going to be a warm day, so I cache the meat in the shade of a ponderosa pine and join the other hunters.

As a farm kid, my eyes are always open to regional variations in agricultural practices and customs. I’m curious about how eastern Oregon ranchers drive fence posts in the hard volcanic soil. Turns out, they don’t. They build these “rock jacks,” counterbalancing cribs of boulders to hold up the fence posts and wires.

For the next couple days I hunt with Paul and company, helping spot and drive elk. Here, Paul glasses distant bulls through his spotting scope. It’s Bushnell’s Elite Tactical spotter, and the bright glass and configuration (8x up to 40x) means that you can use it effectively without a tripod, at least at lower magnifications.

Oregon’s rifle elk season is short and intense, which means there are a lot of hunters in the field. At night, we pore over maps to figure out the next morning’s strategy.

Meanwhile, I turn my attention to other game. I have a cougar tag in my pocket, and I talk Aaron Oelger, Bushnell’s marketing director who has also filled his elk tag, into hiking into the breaks of the North Fork John Day River to call to cats.

No luck, so Aaron and I hunker down in a ground blind to ambush turkeys. We don’t see many gobblers, but we do see this very nice eastern Oregon mule deer.

Finally, a string of Rio Grande gobblers ambles through the abandoned orchard where we’re set up, and I make a point-blank shot to down this bird.

Now it’s time to hunt the coyotes I hear and see nearly every day. I try some call-and-wait sets.

As we’re walking to another set, we jump a coyote. He’s seen us, so there’s no use calling. He starts accelerating away from us. I miss a shot at 300 yards. He is loping away at 400, then 500. I wait for him to slow down and hold my reticle a full body depth above his shoulder. He’s still quartering away when I squeeze the Weatherby’s trigger. The coyote jumps forward and falls in his tracks. It’s my farthest confirmed coyote kill: 593 yards. Paul Arnhold shows me the readout in the laser-ranging Fusion binocular.

The male coyote is prime, with beautiful guard hairs. I will skin him back at camp.

And reminisce a bit about the ponderosa pines, the high plateaus, and the generous country of the John Day River. I may not have been here as early as I might, but as with most things, it’s better late than never.