Dream Hunts: 5 West Big-Game Tags You Need to Apply for This Season 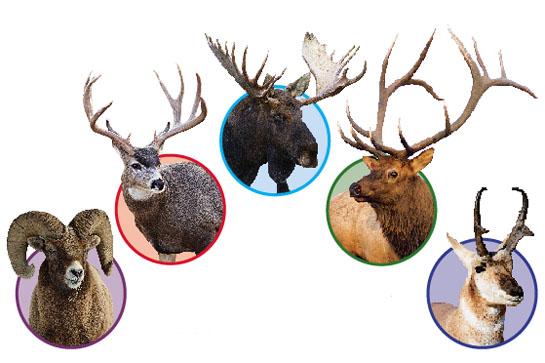 Hunting season begins this month in many Western states, with applications due for limited-quota permits. These big-game lotteries distribute coveted bull, buck, and ram licenses, but also the antlerless tags that are the consolation prize for most of us without scads of preference points or luck on our side to draw the premium permits. Here are five of the most rarefied opportunities in the West for tags that are big-game hunters’ equivalent of Powerball jackpots, but also some great meat hunts that you’re almost certain to draw.

1. Bighorn Sheep
Trophy Pick:
Montana is arguably the best spot in North America to kill a trophy bighorn ram, and the red-hot unit is District 680 in the Missouri River Breaks. But if you have just $5 to spend, throw it down for a Super Tag. If you draw this sheep tag (the state issues only one per year), you can hunt rams in any open unit in the state.

Meat Hunt:
Bighorns are managed for trophy rams, but if you simply want to hunt sheep, apply for a ewe license in a relatively undersubscribed unit, like 680 or 422.

2. Mule Deer
Trophy Pick:
The most consistent producer of 200-inch bucks in the nation is southern Utah’s Henry Mountains. But drawing a tag here is as likely as finding a 24-carat diamond in your compost heap. Others to consider: Oregon’s Umatilla Refuge and the Arizona Strip (Arizona units 13A and 13B).

Meat Hunt:
With the largest mule deer herd in the country and the highest proportion of antlerless harvest, Colorado has abundant doe tags and liberal late seasons.

3. Moose
Trophy Pick:
Shiras moose are on the ropes across the West, and biologists are investigating widespread declines in Montana and Wyoming. Is it wolves? Warming seasons? Parasites? Your best bet for a good bull these days–and relatively tolerable drawing odds–is Idaho’s Panhandle, specifically Unit 1, where 140 bull tags were issued in 2013.

Meat Hunt:
Idaho also gets our nod for antlerless hunts. Look in 600-series units adjacent to Yellowstone Park in the southeast region.

4. Elk
Trophy Pick:
There are no shortage of epic elk units, but Arizona’s Unit 10 (where nearly 7,000 hunters applied for 75 rut-week tags in 2012), Wyoming’s Sunlight Basin (Unit 52) migration hunt, and southwest New Mexico’s Unit 15 are all consistent producers of 400-class bulls.