Brutal winters like the one we’re experiencing in the upper Midwest can wreak havoc on an outdoorsman’s plans, but for... 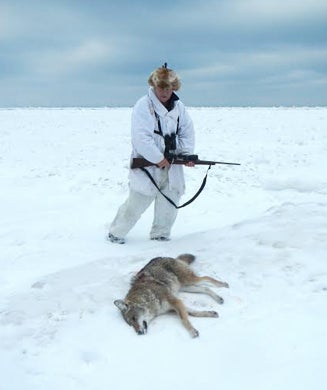 Brutal winters like the one we’re experiencing in the upper Midwest can wreak havoc on an outdoorsman’s plans, but for a coyote hunter willing to deal with the snow and cold, opportunities abound.

Lake Superior, the largest body of fresh water in the world was almost completely covered by ice this winter. For weeks it served as my own coyote hunting paradise. When snow piles up and the peak of the coyote breeding season hits, the dogs take to the wind swept ice to rut. These conditions there make traveling between food sources – usually deeryards along tributary streams – and breeding areas much easier. A predator hunter with good optics, white camouflage, and a flat-shooting rifle can have the time of his life chasing them.

I like to start at daylight, glassing the frozen expanse from a bluff overlooking the lake’s shore. Although it’s not unusual to see a coyote any time during the mating season, most movement is early or late in the day. Often times, the coyotes I see are no more than small, dark spots miles out on the ice.

Hunting into the wind is key. Stay behind the first pressure ridge of ice along shore, then climb to the top of one and glass ahead every quarter mile or so. These are also good spots to stop and call for a coyote that could be hidden among the chaotic mounds of wind blown ice. Watch for flocks of ravens dipping and circling. Coyotes and ravens are competitors during a tough winter and a concentration of the birds usually means a coyote has caught their attention.

When I spot a coyote far out on the ice, I try to cut the distance using the wind to my advantage before calling. Once I think I’m close enough for him to hear a call, I’ll take cover behind a ridge of ice and begin a series of rabbit distress calls. This is the place for a good split reed mouth call. The run-and-gun tactics mean you’ll have to leave your heavy electronic calls on shore for another day.

For some reason, maybe because of their higher comfort level, coyotes are more responsive to predator calls on the ice than they are in the woods. In my experience, coyotes come to the call more often than they ignore them.

If you see a coyote—or a pair of them—coming they’ll probably try to get downwind of you. This is usually when they’re as close as they’ll get and when you want to take the shot. I like to have them within 200 yards or closer, especially in a windy environment like Lake Superior where bullet drift is always a factor.

Hunting in pairs between access points makes sense too, and don’t forget your ice cleats and picks for worst-case scenarios. Lake Superior in the winter is a hostile environment and she does not forgive mistakes.