Planting the ‘Forever’ Food Plot for Whitetails and Turkeys

Photo by Charles Alsheimer I was like a proud father waiting to show off his newborn son. I had recently... 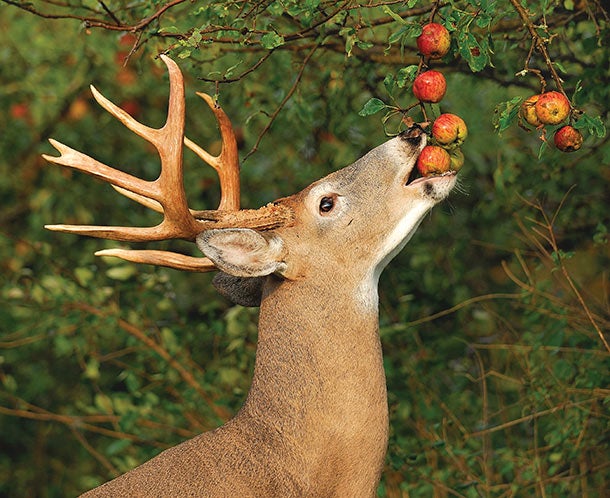 I was like a proud father waiting to show off his newborn son. I had recently closed on my own 17-acre patch of dirt and invited whitetail habitat guru Jeff Sturgis for a visit. Sturgis, who offers habitat-consulting services, spent more than an hour scouring the ground and was ready to make some recommendations for enhancements that would, I hoped, make the land more attractive to the area’s whitetails and turkeys.

I was expecting Sturgis to lay out an intricate web of food plots connected by stands of grasses and security features. After all, that’s the type of whitetail nirvana I’ve seen on TV countless times.

What Sturgis recommended, however, was something different.

“Yes, you should plant a food plot or two,” he said. “But I think you should really focus on enhancing the native shrubs and trees that already exist. You’ll be able to produce a lot of forage without spending a ton of money. And the results will last much, much longer.”

Sturgis’ advice was refreshing. And it makes plenty of sense.

“Food plots have their place, there’s no doubt about it, and you should include them in most habitat plans,” he said. “But you can do a lot of good–especially on smaller parcels–by understanding that a deer’s diet is heavily dependent on native browse and forage. By enhancing or providing that browse, you’re taking full advantage of what the land can produce.”

And the best news? Most areas already have plenty of these “forever plots” to begin with.

The Value of Trees
Rather than clearing areas of brush and grasses to plant a food plot that must be maintained each year and will produce limited amounts of forage, first identify beneficial species that already exist. Persimmons, apples, and oaks are obvious draws for whitetails, and each can be improved in a manner that creates a highly desirable food source without the effort and expense of planting traditional food plots.

“A chainsaw is a food-plot implement in a lot of ways,” said Sturgis. “If you have apple or persimmon trees on your land, pruning them can greatly enhance their production. Clearing out less-desirable trees and brush around them can also make them produce more fruit by eliminating competition for water and nutrients. Plus, bucks absolutely love to scrape under them.”

Fertilizing mast-bearing trees can also improve their production. If your area lacks native, mast-producing trees, you can plant your own. And thanks to modern hybridization practices, you won’t have to wait decades for the trees to produce, either. Chestnut Hills Outdoors (chestnut​hill​outdoors.com) offers Dunstan chestnut trees that produce nuts in as few as two years. Dubbed the “food plot tree,” chestnuts are claimed to outdraw acorns because of their sweet flavor, and they boast a carbohydrate content of up to 40 percent. Best of all, Dunstan chestnuts bear fruit annually.

Not in the mood to plant a bunch of trees? No problem. Simply learn to identify native shrubs that deer prefer to browse and hit them with timely applications of fertilizer.

“Greenbrier, honeysuckle, raspberries–the list is pretty long,” said Sturgis. “So much of a deer’s diet is based on browse. Rather than clearing out shrubs, learn how to identify and then manage for them. Just applying fertilizer can really make a difference. Then you have a food source that also helps to provide that security cover deer love. It’s the best of both worlds.”

These are a favorite of whitetails across the nation, and an important winter food source that can be enhanced with applications of fertilizer and by removing competing brush.

Most apple trees are all that remain of old homesteads, but whether heirloom species or crabapples, this fruit appeals to deer. When pruned and fertilized, most will produce fruit.

Reviled in many areas because of their nasty thorns, these trees produce banana-like pods that cover the ground in the fall. Come winter, these pods are a prime food source for whitetails.