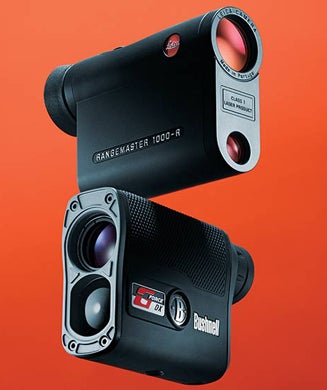 The first range-finders to come to market were cumbersome, complicated, and priced way too high for what you got. Today’s models still represent a substantial investment, but you get a lot more for your money. We tested six of the most feature-packed units to see which are most fieldworthy.

★ ★ ★ ★
$599/us.leica-camera.com
▶ The 7x24mm Rangemaster bested the field in nearly every category. The only ding on this unit is that it isn’t tripod-adaptable. It won the clarity test hands down; our test target was plainly visible beyond 400 yards (see “How We Test,” below). In low-light conditions, the Leica was brighter than all other models both in open country and dark woods. It returned distance readings in just over half a second, by far the fastest in the test.

★ ★ ★ ★
$399/bushnell.com
▶ The G-Force DX offers a wide variety of features, including angle compensation in bow and rifle modes. The latter offers calculations for bullet drop (in centimeters, inches, MOA, or MILs) for eight different ballistic groups of centerfire cartridges and two muzzleloader groups. The 6x21mm G-Force DX has a very crisp perceived image, albeit with a slight blue hue, and it resolves objects clearly in low light. Furthermore, it can be mounted on a tripod for rock-steady long-distance ranging.

▶ Among the innovative features of this compact 6x22mm unit is the True Ballistic Range calculator, which provides angle-­compensated range and holdover readings (again in centimeters, inches, MOA, or MILs) based on seven pre-loaded groups that match the ballistics and trajectory of dozens of rifle cartridges. The clarity was bested only by that of the Leica, and it accurately ranged deer-size game beyond 500 yards.

▶ The 6x22mm Ranger’s optical clarity was very good—objects appeared crisp and clear, even in low light. The ranging button must be pressed three times to initially range an object (the first powers up the unit, the second activates the crosshair, and the third ranges the target). While multiple pushes slow the speed of distance readings, having to press the button to bring up the crosshair allows for clear target acquisition as the shooter begins ranging.

▶ The Aculon’s image wasn’t super bright, but objects appeared sharp. The large black display worked well in normal conditions, but in the woods in low light it was difficult to see. The 6x20mm Aculon’s Target Priority Mode is designed to ignore things like tree branches that obscure a target. It worked properly when ranging a deer-size target to 200 yards; however, at 400 yards, it ranged a line of trees beyond the target.

▶The image through the lightweight, ergonomic X-Ray was yellowish and a bit muddy. The toggle-style mode/ranging button was easy to use under normal conditions but proved difficult with gloves on, and the small diopter ring was difficult to adjust as well. The 6x23mm Halo provided fast and accurate ranges on our deer-size target out to 500 yards, but the black display was lost in dark conditions in heavy timber.

We put the rangefinders through a battery of tests, including:

Accuracy: Measurements were taken on a deer hide draped over a sawhorse at 200, 400, 800, and 1,000 yards, both on flat ground and at a 15-degree incline. Distances were verified with a tripod-mounted laser.

Clarity: We lined a 16-inch-square white board with 1-inch black stripes spaced 1 ½ inches apart. A rangefinder “winked out” at the distance where the lines were no longer discernable.

Edge clarity was determined by placing the board at the edge of each instrument’s field of view at 50 yards while focusing on a stationary object.

Speed: We used a track stopwatch to measure the time elapsed from powering up to display, to return a reading on a reflective sign at 250 yards.

Display: Visibility of the display was evaluated in both bright (snow) and dark (timber at dusk) conditions.

Low Light: We evaluated target acquisition of a dark target placed deep in the timber after sundown.