Montana wildlife commissioners could decide as early as tomorrow to close this fall’s hunting season for sage grouse, the iconic... 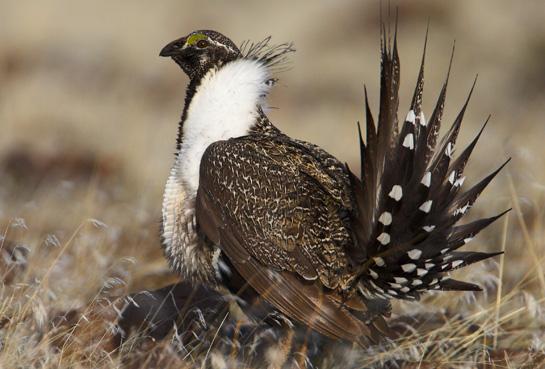 Montana wildlife commissioners could decide as early as tomorrow to close this fall’s hunting season for sage grouse, the iconic game bird of the wide-open West.

The sage grouse season closure is on the agenda for the Fish, Wildlife & Parks (FWP) Commission when it meets in eastern Montana on Thursday, May 22. The agenda item was added unexpectedly yesterday as results from spring grouse surveys are being tallied. The surveys indicate no improvement from last year’s near-record low populations.

The announcement is surprising given repeated assurances that Montana’s population of native sage grouse is one of the strongest in the bird’s 11-state range. In fact, as other states have either closed their grouse seasons entirely or restricted bag limits or season lengths, Montana’s season has been relatively unaffected over the last several years.

But Jeff Hagener, FWP’s director, said that last year’s surveys of spring dancing grounds, known as leks, was 48 percent below the long-term average. “And our preliminary 2014 numbers show no improvement across all three of Montana’s sage grouse management zones.”

That 48-percent decline is important, because hunting restrictions are recommended by the state’s sage grouse management plan when lek counts are at least 45 percent below the long-term average for three consecutive years.

“Based on the declines FWP biologists are documenting on the ground, FWP recommends that the most responsible course of action at this time, which is consistent with the state’s management plan, is to remove hunter-harvest mortality,” says Hagener.

Sage grouse declines across the West have corresponded with loss or fragmentation of sagebrush habitat, as energy development, agriculture, wildfire, and subdivisions have all impacted the range. But Montana has maintained for years that its core sage grouse habitat is among the most intact in the region, so biologists will be working this year to determine the specific causes of the population decline.

Montana’s decision to close hunting would follow that of neighboring North Dakota, which closed its sage grouse hunting season several years ago. But the move doesn’t sit well with all hunters. As Steve Schindler, a hunter from Glasgow, Mont., notes, “When I first started to hunt in 1962, the sage hen was the bird everyone went after. We are told that [recent declines] are a loss of habitat, but in southern Valley and Phillips counties [in eastern Montana], the habitat is the same now as it has been for the past 200 years.”

Sage grouse mortality factors include drought, West Nile virus, predation, and overgrazing. The species has been frequently mentioned as a candidate for listing under the federal Endangered Species Act as early as 2015.