Four inches. That’s a little shorter than your phone, a little longer than your thumb, and it’s the margin of... 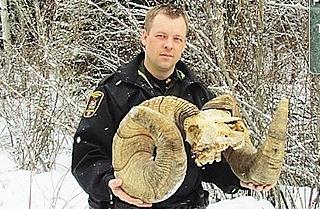 Four inches. That’s a little shorter than your phone, a little longer than your thumb, and it’s the margin of horn mass that dropped the would-be world-record bighorn ram to number 5 on the all-time list of trophy heads.

We reported on the discovery of the Alberta ram in April. The full-curl head, green-scored at 209-1/8 inches, was picked up by Alberta wildlife officers near the Cadomin Mine near the British Columbia border. That’s the reclaimed coal mine that has produced a number of record-class rams, and it appeared that this latest ram would eclipse the existing world record by 6/8 of an inch.

Because the ram’s horns had been exposed to the elements for months, wildlife biologists expected the green score to be very close to the final measurement, which must be taken after a mandatory 60 days of drying.

But the Boone and Crockett Club announced today that the official measurement revealed the horns had lost an astounding four inches of mass, dropping the final score to 205-7/8.

The 60-day drying period — the head is kept at room temperature to dissipate any humidity or natural moisture — is designed to ensure that all scorable big-game trophy heads are held to the same standard, but typically losses in mass are measured in fractions of an inch, not four inches.

Alan Hale, chairman of B&C’s Big Games Records Committee, says that the dead ram had lain under a heavy burden of snow for months before it was found, and months of absorbing moisture swelled its dimensions.

“Biologists speculate this latest ram died of old age in early summer 2013,” said Hale, “so the horns were exposed to the elements through the remainder of summer, all fall and all of a wet, snowy winter. Apparently, the horns absorbed an incredible amount of moisture, because four inches of shrinkage during the 60-day drying period is very rare.”

The current record, then, stands at 208-3/8. That’s a ram that was taken only a few miles from the Cadomin Mine property where the would-be world record was found.