Montana Shortens, Closes Much of its Sage Grouse Season

Citing widespread precipitous declines in sage grouse populations across much of the prairie birds’ core habitat, Montana this week closed... 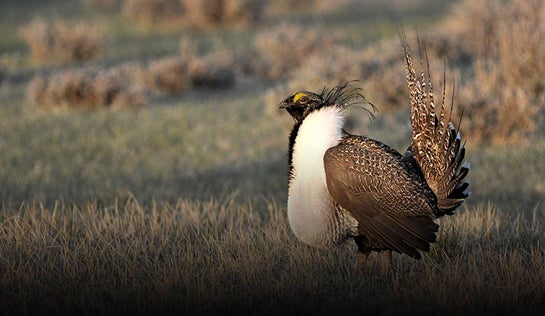 Citing widespread precipitous declines in sage grouse populations across much of the prairie birds’ core habitat, Montana this week closed hunting across a wide swath of the state and shortened the season elsewhere.

Montana’s Fish, Wildlife & Parks Commission heard testimony from hunting advocates, who reasoned that the small mortality caused by hunters is outweighed by the attention and conservation that license-buyers devote to the imperiled bird and its habitat. In the end, the commission voted to leave some parts of the state open to limited grouse hunting, but closed all hunting in the southeastern portion of the state.

State biologists had argued for widespread hunting closures–including an option to close the entire season statewide–citing the lowest spring census of sage grouse since 1980 and the looming decision by the federal government that could classify sage grouse as an endangered species. A federal listing, expected as early as next year, would prohibit all hunting and could have wide-reaching impacts for sage grouse habitat and natural-resource use around the West.

The commission’s decision closes the sage grouse season in a wide swath of south-central and southwest Montana from Bozeman to the North Dakota border. It also closes hunting north of U.S. Highway 2 along the northern border, leaving portions of seven counties south of the highway open.

The commission further shortened the season from 60 days to 30 days. Montana’s sage grouse bag limit remained unchanged at two birds per day and four in total.

Perspective
What you just read is a highly newsy review of this week’s action. Now, for a more personal perspective. As you know from my previous blogging I have mixed feelings about hunting restrictions on the iconic bird.

On the one hand, populations are in a well-documented spiral, and hunters should share any restrictions in activities that affect grouse. It sends the right message to the wider community that hunters are keen not only to pursue and possess these birds, but also to protect them.

On the other hand, restricting hunting is mostly symbolic. As many people testified before the commission–including myself–hunting in most parts of the state has a tiny impact on populations, especially when you consider the vast scale of the country sage grouse inhabit, the few numbers of hunters, and the other, more impactful factors, including grazing, energy development, and long-term drought conditions.

If hunters are restricted, then we have the right to expect these other–more egregious–impacts to also be restricted. These should include revisiting the impact buffer around grouse breeding areas and maybe even fencing off some riparian areas on public land from seasonal livestock grazing.

Those are huge issues, and ones that will form the topic of intense lobbying, not only in Montana but elsewhere in the West where sage grouse populations are in even dire declines.

Did Montana’s FWP Commission do the right thing? I’m honestly not sure. I’m pleased the season remains on the books and that hunters are still part of the equation. Personally, I’m happy the area I hunt remains open, and I think it’s correct to shorten the season.

And I’m glad the commission looked at a mechanism that could reopen parts of the state it closed. One of my greatest worries is that once we lose a hunting opportunity, it’s doubly hard to get it back.

I do worry, though, that by keeping a small section of the state open to hunting, the state could inadvertently focus an undue amount of pressure on those birds. In the last day or two, I’ve already heard from friends elsewhere in the state and nation who haven’t hunted grouse in years. Worried that the feds might close the season forever, they’re making plans to hunt one last sage grouse for the taxidermist.

My suggestion: the state should issue carcass tags for sage grouse, just as they do for wild turkeys. The sales of the tags could raise funds dedicated to sage grouse management and population monitoring, and allow the state to precisely track just how many sage grouse hunters are out there and how many birds they harvest.

And by requiring hunters to tag their grouse, they elevate this grasslands icon from an anonymous game bird to a trophy species. In my mind, that’s precisely what they are: part of our prairie legacy that’s worthy of our elevated respect and attention.