A Tale of Two Bucks

Remorse I wasn’t especially surprised when I pierced the apple at 80 yards. The crossbow I was shooting–Barnett’s Ghost 410–zips... 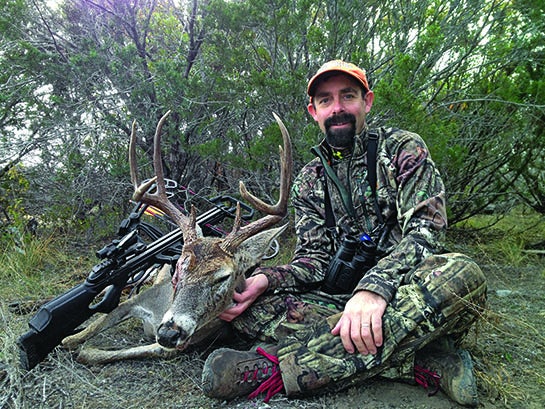 Remorse
I wasn’t especially surprised when I pierced the apple at 80 yards. The crossbow I was shooting–Barnett’s Ghost 410–zips arrows at more than 400 feet per second. And the graduated reticle in the bow’s scope showed me precise holdover values all the way out to 100 yards. Punching the apple was a matter of doping the wind and, after a half second of flight, watching the arrow slice through the Red Delicious.

So later in the week, when the buck stepped into the cedar clearing at 120 yards, I had every confidence that if he continued to come to my grunt call, I could kill him at a distance I’d never consider if I was shooting a compound bow.

The buck stalled at 72 yards. But I knew where my crossbow shot at that distance, so when he turned broadside, I held just behind his shoulder.

I blood-trailed that buck for a half mile with my headlamp, and found his carcass the next day, his eyes and rump eaten away by raccoons. I felt sick. I had tortured that deer by taking an irresponsibly long shot.

Redemption
I knew everything I had done wrong. The buck had jumped at the sound of my bowstring, and my arrow hit 5 inches in back of where I intended. A half second of flight time to an apple is an instant, but to an animal it’s an eternity.

Because of that experience, I nearly turned down a return trip to Texas the following year. It was another crossbow hunt, only this time I’d be shooting Barnett’s new Razr model. I swore out a private oath: I would shoot at no deer beyond 40 yards, the distance at which I feel proficient with my compound.

I’d like to build drama into the experience, but in truth the hunt was almost anticlimactic. I clanged rattling antlers together at shooting light, and within half an hour I had two mature bucks fighting in front of my blind. When one turned broadside at 27 yards, I sent 22 inches of Easton carbon arrow through both lungs. He went 65 yards and piled up, demonstrating both the lethality of crossbows and the deadly power of restraint.

The Crossbow Conundrum
Crossbows are fun to shoot, accurate, and lethal. Their proficiency curve–the amount of time and fiddling required to become consistently accurate at hunting ranges–is short compared to that of compound or traditional bows. But that ease of use is deceptive. Because crossbow arrows are typically shorter and heavier than compound shafts, they are less aerodynamically efficient, shedding speed and energy at about the same rate as a compound’s longer, lighter arrows, which are shot at a lower draw weight. My first buck had been the casualty of my thinking that just because I was consistently accurate out to 80 yards, I should shoot at a deer at that distance.