Are Turkeys Gobbling Yet? New Map App Shows You Where to Look

Alfred Tennyson said it: “In the Spring, a young man’s fancy turns to thoughts of love.” The same can be... 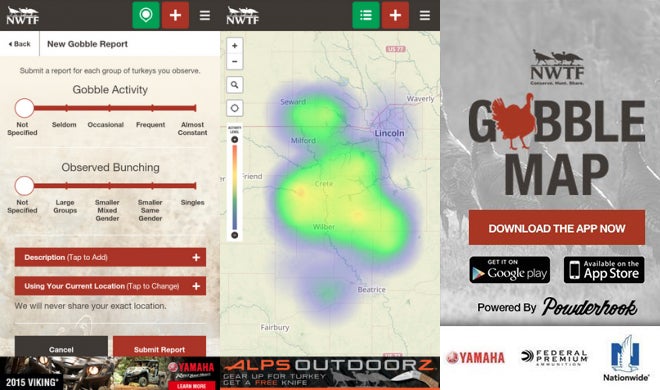 Alfred Tennyson said it: “In the Spring, a young man’s fancy turns to thoughts of love.”

The same can be said of the fancies of young wild turkeys, too, but for a turkey hunter one of the great mysteries of the season is when, and where, male turkeys start to voice that affection.

A new online resource promises to answer that question. Powderhook, which we’ve profiled here for their work on sportsman’s access issues, has a brand new tool that tracks turkey gobbling activity around the country. Called “Gobble Map,” the site and app for both Android and iOS devices allow you to view gobbling activity in any area of the country, plus you can add your own reports. The resulting user-generated “heat map” is not unlike the digital tools that epidemiologists use to track incidents of influenza and other diseases.

Because it’s updated in real time by users who are presumably witnessing first-hand the activity of turkeys in their area, it should show gobblers’ reaction to warm, calm conditions (when toms typically start to gobble) and conversely, how unseasonably cold, windy conditions can shut down gobbling activity as we detailed here.

Powderhook developed the map in conjunction with the National Wild Turkey Federation in order to alert hunters to the prime time and places to hunt spring toms, but the Gobble Map also has a conservation purpose. Big holes in suitable turkey habitat tell biologists that they may need to do habitat or restoration work in those areas.