Best Hunt of My Life: Velvet Muley with a Longbow

"Being within four yards of a deer like that will make your knees weak." 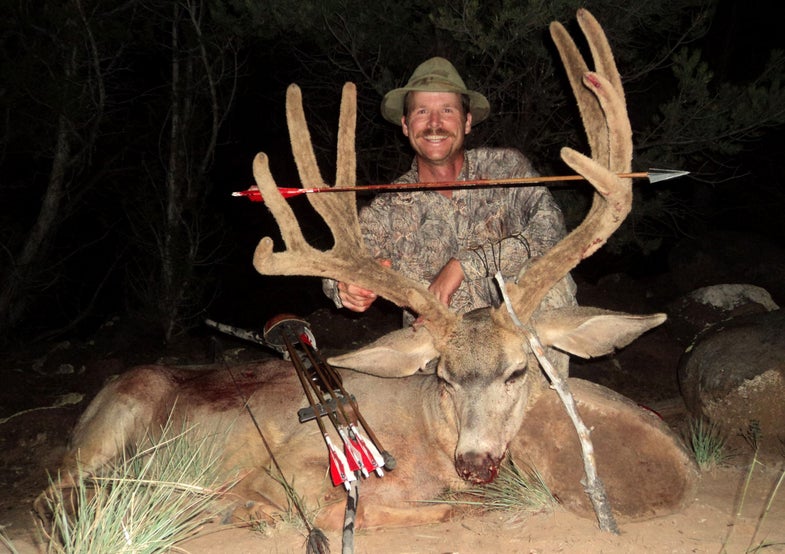 On a Friday night at the end of August, I had one of the best hunts of my life. After working a bachelor group of mule deer bucks for about 30 days, things finally came together.

I was hunting the bucks along a border between private land and National Forest land. After adjusting and re-adjusting my location, I finally found the sweet spot, a little farther from the private land in a more remote area. I hung a climax treestand in a tree that was about three feet tall and as big around as my pinky finger. Or it seemed like it.

Seriously though, it was probably the most marginal tree I’ve ever hung a stand in. I was about 10 feet up, and had to hold still and draw my bow very deliberately or I’d set the treetop—with me in it—swaying. But I had great cover and background in that tree, and I had accounted for the wind.

I settled into my stand at 5:30 p.m. At 6, I heard the deer coming. Two fork bucks passed—already hard horned. Fifteen minutes later another fork came through. At 7, I could hear more deer coming—lots of them. The buck in the lead was a fantasy buck. Absolutely huge. He was a clean typical, with slightly weak front forks but purely magnificent backs. I believe he is about 32 inches wide. He paused at 14 yards, and I started to draw my longbow. I froze when I saw two other big bucks that had plain view of me. Wait, I told myself, for a better opportunity. The monster buck crossed behind me, then after a few minutes came back right under my tree.

Let me tell you, being within four yards of a deer like that will make your knees weak. He paused there, but I didn’t have a shot through the tree. Then he headed out. I drew my bow as he passed in front of me at six yards. I had to reverse-cant my bow and just before I released—my arrow fell off the shelf. I couldn’t shoot.

I sat there in total shock. Ten or twelve more bucks passed, including two nice 5 by 5 bucks that I usually would have been tickled to harvest. I just watched them, knowing that I’d feel disappointed if I shot one after coming so close to the fantasy buck. Another day perhaps, when I could give them the appreciation they deserved. Besides, I knew there were two more really great bucks in the area.

One 3 by 3 buck came right to the base of my tree and smelled the limbs I had climbed through. He started to search for me. For the next 10 minutes he searched the entire area, trying to bust me. Finally, upwind and 100 yards away, he blew two big alarm snorts. It must have been out of frustration, or on a hunch, because he couldn’t have smelled me. Right at that moment I hated him, because I figured he’d ruined any leftover chance for another encounter with a monster buck. He left, and the pinyon, sage, and juniper forest relaxed.

Just before 8 p.m. I heard two more deer, coming in fast. They must have felt late for dinner, because they were on a high trot. The buck on the lead was a buck I knew—one that I wanted, and more than just a little. As he walked by at 12 yards I drew my bow. He saw me, looked, but it was too late. I focused on the sweet spot and dropped the string. He was slightly quartered away. Watching my arrow disappear through him perfectly filled me with elation. I knew instantly that he was mine.

He made a huge leap, a big spurt of blood floating in the air. Like a freight train he shot away and down the side of the mesa.

As soon as I stopped shaking enough to unzip my pack, I put away my gear and climbed out of the tree. My arrow was stuck in the ground, covered in bright frothy blood. I stalled for a few minutes to give the deer time and then took up the trail.

Much to my amazement the buck had traveled about 200 yards, running full out all the way. He crashed in a fence, tangling his antlers in the wire, ripping his velvet up pretty bad. I later stripped the velvet away.

As I approached the buck I realized that he was even bigger than I had estimated. The feeling of awe, jubilation, and accomplishment was incredible. He is the biggest buck I’ve harvested with a bow, and has more mass than any buck I’ve taken with any method. His body was enormous—I could barely move him. I honestly believe that he was 350 pounds on the hoof.

After stripping the velvet the buck green scored 185 4/8 inches gross, and 180 inches net. His outside spread is 26 inches wide. His smallest mass measurement is 4 4/8, and his bases are almost 6 inches