Head Off Road for Bigger Bucks

Deer season was under way in north-central Pennsylvania. A small plane buzzed over the Sproul State Forest, the head of... 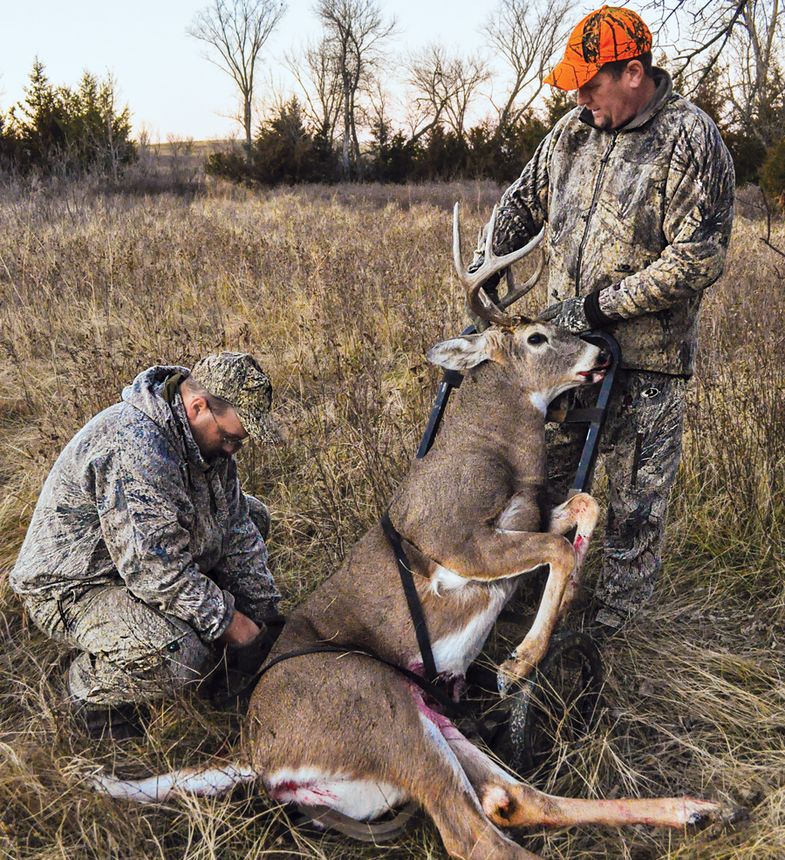 Deer season was under way in north-central Pennsylvania. A small plane buzzed over the Sproul State Forest, the head of a wildlife biologist pressed against the window.
But this Penn State University researcher was not counting deer, he was surveying hunters. With the leaves off the trees, hunters’ blaze orange was easy to spot and mark on a map.

By tallying and mapping hundreds of hunter locations, Duane Diefenbach made a surprising discovery: Nearly 90 percent of deer hunters ventured no farther than 500 yards from a road. In fact, 40 percent of the state forest was untouched by hunters, even though habitat quality was roughly equal across the landscape.

Though this study was conducted 12 years ago, its conclusions remain compelling, says Kip Adams of the Quality Deer Management Association. As a biologist, he, too, understands that those lightly hunted areas are precisely the kind of places bucks go to escape hunting pressure.

“Unintended, de facto sanctuaries are often found in areas with low accessibility or difficult terrain,” says Adams. “You can hunt unpressured deer by being willing to walk—and, hopefully, drag—a little farther than your hunting competition.”

Odds are there is an untouched buck sanctuary near you. To find it, lace up your boots and leave the road behind.

The Road Not Taken
The primary reason to hunt near a road is ease of game retrieval. In dense forest like the Sproul, hunters also depend on other hunters to keep deer moving. Venture off alone and you lose this advantage.

But as Adams suggests, there are bigger advantages to hunting deep. Wise old bucks seek out secluded areas that offer them better odds of surviving to reach trophy potential. Unpressured deer tend to act more naturally—they’re calmer and more likely to respond to rattling and calling than those subjected to higher hunting pressure.

Other advantages transcend biology. Matching wits with a big buck in his own backyard is deeply satisfying. The farther you go into the backcountry, the more you can enjoy the sights and sounds of nature, rather than the disturbances of man and machine. Some hunters seek out physical challenges, taking pride in knowing they pushed themselves.

“All other things being equal, you will probably see more game if you get away from the crowds and into these security areas,” says Randy Newberg, host of the Sportsman Channel’s Fresh Tracks with Randy Newberg.

“When deer start hearing the gunshots and slammed truck doors of opening day, they know what’s going on and they head for more secluded habitats,” Newberg says.

You don’t need to be a modern-day Jim Bridger to hunt the backcountry. You only need to do your homework.

Newberg gets peppered with questions from sportsmen around the country who want to know more about venturing farther from the security of their vehicle: “For a lot of people, getting beyond their traditional limitations can be very liberating.” 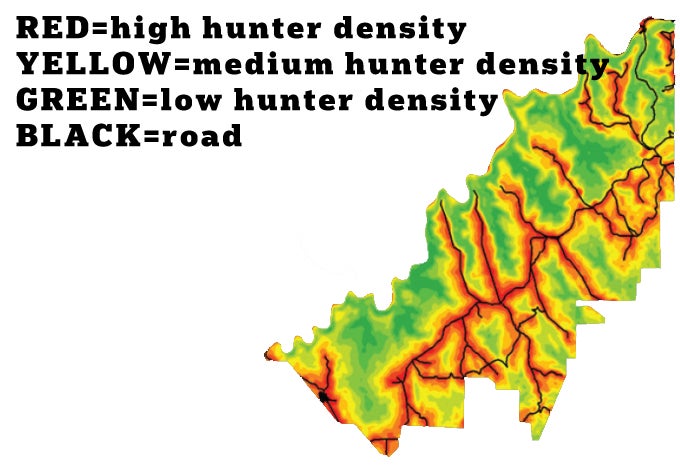 Pressure Points A 2002 aerial survey of deer-hunter density and distribution in Pennsylvania’s 114,000-acre Sproul State Forest provides graphic confirmation of a long-held credo: If you are looking to hunt unpressured bucks, get away from areas that are easily accessible. Penn State researchers estimated that 87 percent of deer hunters hunted just 56 percent of the land, which is the percentage of the area shown in red within one third of a mile of a road. That’s six times the hunter density on the rest of the area. Hunter-density maps on public land in your region will look similar. Looking for unpressured deer? Go for the green. Illustration by Windigo Images.

The Back of Beyond for Beginners
Confidently hunting the backcountry requires a combination of skills, tools, and mindset, according to Newberg. But of all these, a can-do attitude may be the most important. Here are some tips:

Prepare physically and mentally
Make sure you’re up for the physical challenge. Study maps and hone your skills with GPS and compass. Make a plan not only for hunting, but also for retrieving the game should you score. Then steel your mind: You can do this. After all, your ancestors hunted mammoths with rocks and sticks.

Build a team
Many hands make light work. Talk it over with your hunting companions, agreeing to help each other retrieve game should any of you score. Have a system for communicating—via phone, two-way radio, or signal whistles—for when you need help. I have friends who don’t hunt but who help me pack out game for the adventure and a share of the meat. Ideally, your team includes your boss, who will understand why you need a day off.

Trim your kit
Think like a backpacker, who will cut the handle off his toothbrush to save ounces. Pack only the essentials. A Thermos might be nice to keep drinks cold or warm, but a water bottle weighs less. More and more manufacturers are translating mountaineering technology into lightweight hunting gear. But be warned: You may pay a premium for lightweight, top-quality gear. As one mountaineering friend says, the more you’re willing to pay, the less you’re forced to carry. I traded up my standard 10-pound .30/06 for a 6-pound .308 mountain rifle and have never regretted the expense.

Pack the right tools
Your kit needs to be light but complete. Keep a saw, parachute cord, a knife sharpener, a headlamp, and cotton game bags contained within a day pack designed to carry a load of meat as well as your gear. Where they’re allowed, use a game cart to haul in your gear and haul out your buck.

Butcher in the field
A whitetail buck can weigh 250 pounds, but most of that weight is hair, hide, bone, and gristle, which can be left behind, as local laws allow. When you bone the meat, or use the gutless butchering method, the biggest buck can be reduced to one heavy load or two comfortable loads for backpacking or game-carting.

Tote smart
If you need to drag a buck to your rig, use a sling made of nylon webbing that goes over both shoulders and centers the load in the middle of your body. This allows you to use all your body’s strength, not just your arms. Dragging a deer without a sling is risking a back injury.

Drag the deer headfirst
To streamline the forequarters, tie the buck’s forelegs behind its ears and anchor the dragline around the front hooves. Make the dragline short enough to lift the deer’s head off the ground, but not so short that the antlers stab the back of your legs. Saw the lower legs off so they don’t snag brush. Then, tie the rear legs shut at the hocks to limit debris in the body cavity. (Untie the hocks and spread the legs when you hang the carcass to cool.)

Go slow, with plenty of breaks. And take satisfaction in knowing that sweat and effort are the finest seasoning for a venison steak.