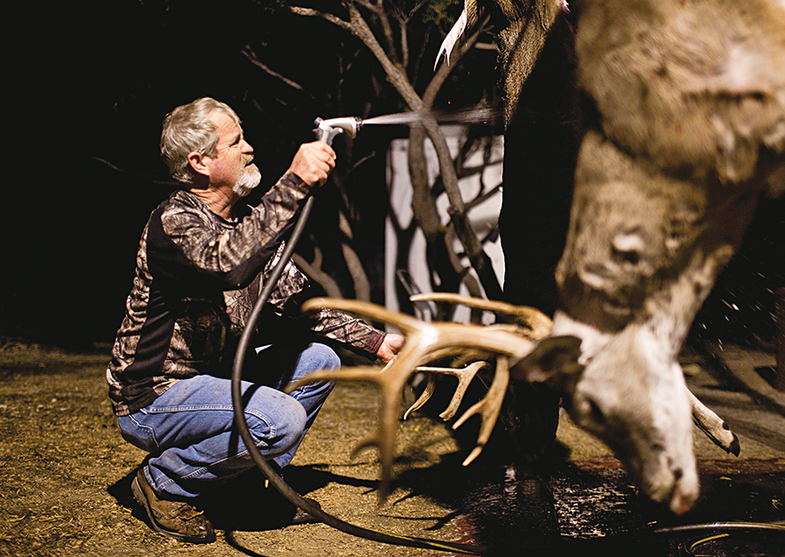 Outdoor Life: As hunting manager on a big Texas ranch, you’re balancing wildlife with cattle and oil production. Do deer get the short straw on a working ranch?
Billy Bob Galbreath: I’m probably as protective of our deer as the cowboys are of their cattle. I worry about them when the weather gets cold, or that we might be killing too many. Normally there’s a pretty good balance, but the ongoing drought here on the Edwards Plateau has taken a toll. There’s not enough natural forage to go around like there used to be.

**OL: But you also bait. Is that to sustain the deer, or to make them easier to hunt?
BBG: **A little of both. We supplement their natural diet with feed, and use it to concentrate them. But those older bucks have figured out feeders are dangerous. Trail cams prove they’re nocturnal. The better bucks I’ve seen will come in a full hour or two after the feeder goes off.

OL: Your regular job is bridge inspector for the state. How did you start moonlighting as a wildlife manager?
BBG: I met Steve [Anderson, the owner of Vatoville Ranch] when I asked if I could hunt some does. We hit it off and he kept asking me back, and I kept coming. Now I’m down here so often that I neglect my own homestead, at least according to my wife.

OL: You have two first names, but everybody on the ranch calls you “Bunk.” How did you get that handle?
BBG: My father said I could fall asleep just about anywhere.

OL: Hunters kill more than 100 deer every year on Vatoville Ranch. Do you handle them all?
BBG: I used to gut and prep every one of those deer, but lately I’ve gotten some help. The most important thing to us is making sure the meat is cared for properly. And I always take the jaw to age them and assess their health.

OL: What’s the oldest deer you’ve seen?
BBG: Probably an 8-year-old, but she didn’t have any teeth left. We’ve seen 10-inch-long hooves, antler beams that crossed over each other, healed-over wounds. It’s always interesting to see deer up close after you’ve seen so many at a distance for so long.

OL: You’re a self-described “whitetail addict.” What other animals do you hope to hunt?
BBG: My father and uncle both killed big mule deer on the Kaibab National Forest, and I’d love to do the same. I want to kill an elk, but my house isn’t big enough for the kind of bull I’d like to tag.

Do you know someone who would make a great candidate for a My OL Q&A? Tell us about him or her by sending an email to myol@outdoorlife.com.