Quest for Wild Bacon: Scouting and Setting Up an Ambush for Hogs

Up at 5 a.m. Feeling excited and eager as I make my way through the dark cabin pulling on the... 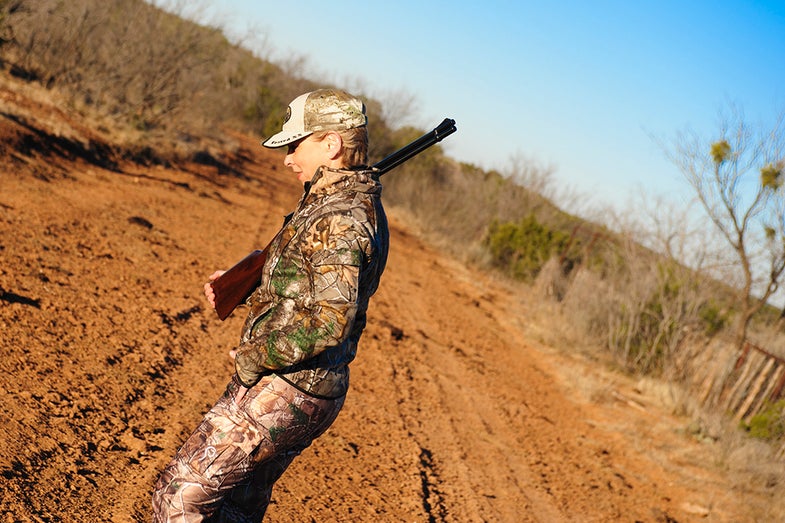 Up at 5 a.m. Feeling excited and eager as I make my way through the dark cabin pulling on the Prois camo I laid out the night before. My excitement has been building very slowly, but now there’s a crescendo. Mari, Randy, and I head over to the mess hall for a cup of coffee before heading out. Breakfast comes later. I discover I’ll be hunting for boar in much the same way that I hunted for whitetails so many years ago: at daybreak and dusk. Mari is not hunting herself, but is coming along to shoot a few photos. We climb in Anthony’s dualie—getting around on such a huge property requires more than horses or ATVs. 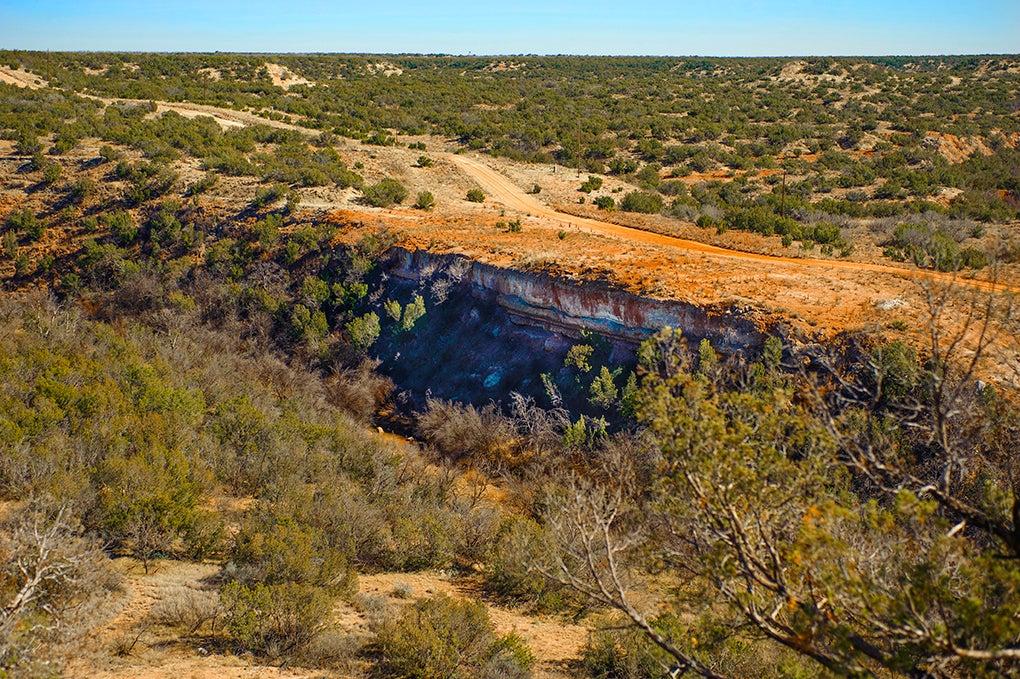 Various chunks of land on the property, comprising several thousand acres each, have been given names for reference. East Braves, Bird Creek, North River, Seven Sections, Hunt Trap, Oh-Yoke, North Dikes, the Meadows, Cedar Mountain, Bull Pasture, South Flat… And then within each of those thousands-of-acres parcels there are additional way-points. One of those is Honey Pens, in Hunt Trap, where they’ve noticed recent signs of boar activity (see the rooted prickly pear, below). That’s where we’re headed. 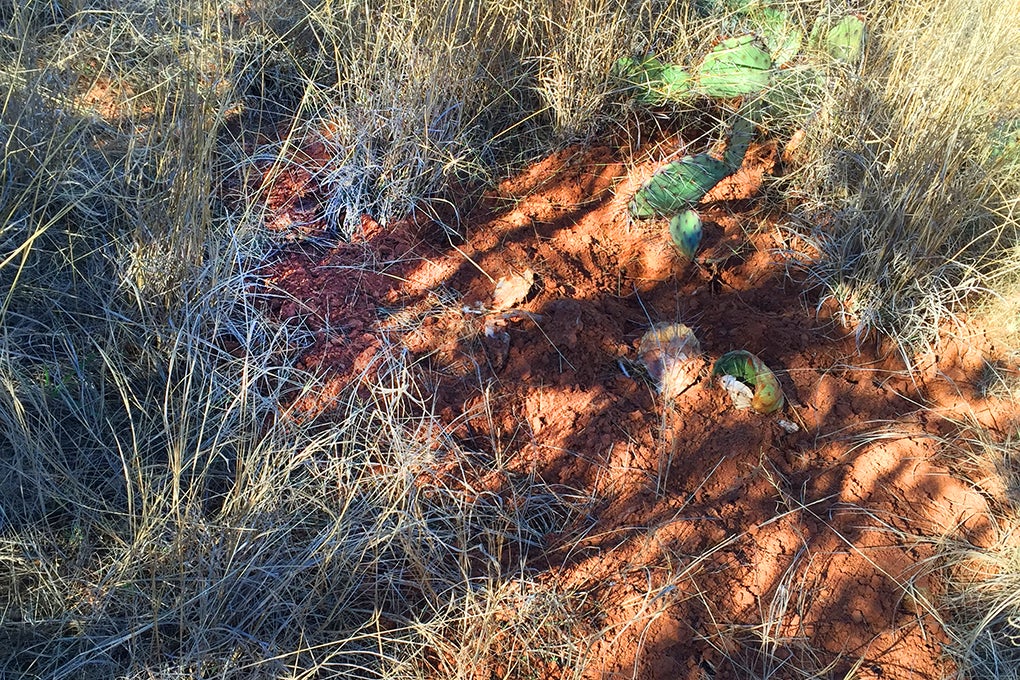 When we reach Honey Pens, I understand the name is derived quite literally from cow pens where the cowboys occasionally corral the cattle. In the clearing is something called a syrup tub, though with Anthony’s accent it sounds like “serp tuhb.” It’s a big rectangular basin with a lid and four rotating iron wheels. It contains a nutritional molasses cattle lick. The cows enjoy it in their leisure, but most often seek out the sweet treat in the morning and evening after grazing on grasses. The tubs also happen to draw in sweet-toothed pigs which cannot reach the lick from ground level, so they try hopping on top to get at the lick. Fresh tracks and trails have been spotted in the last couple days, so we set up here. 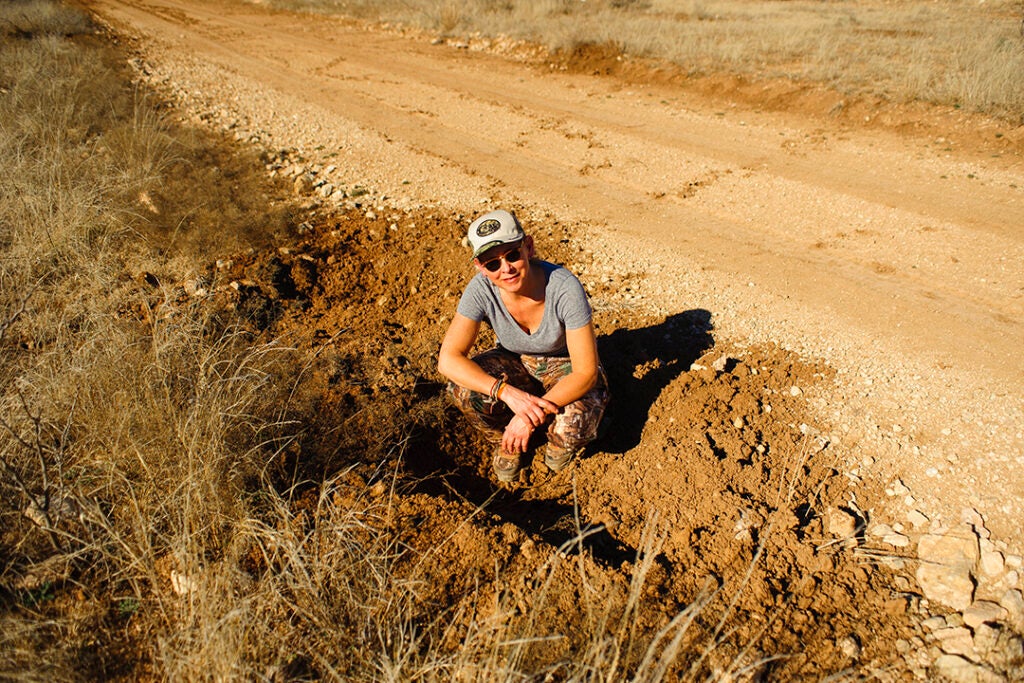 The author checking out a hog wallow.

Funny as it sounds to me, our cover will be a two-dimensional cut-out of a cow, referred to as “Betsy.” We snug into a pocket of sagebrush, Anthony drives the pick-up out of sight, and then rejoins Mari and me behind the ample flanks of Betsy. It is dark. And silent, except for the yawns of a certain teenage daughter. The air is cool. 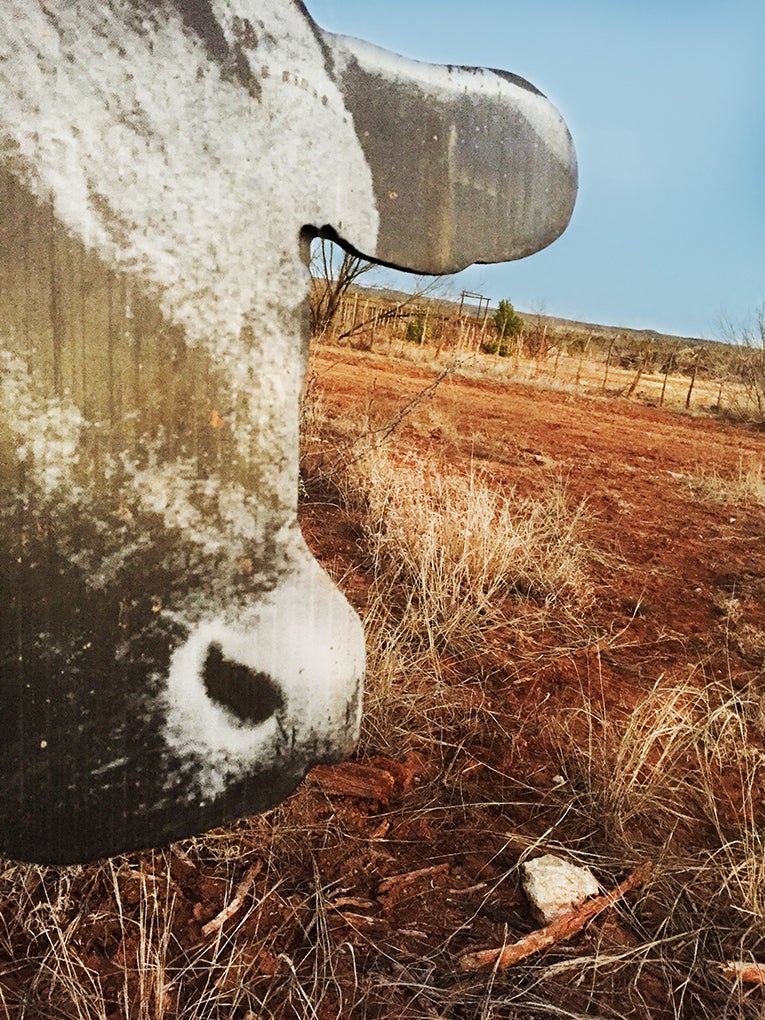 In our stillness, and as day breaks in a pink sliver on the eastern Texas sky at our backs, my thoughts wander. Gratitude is what I’m feeling at this moment. I am not nervous, not anxious. I am thankful; for a loving and supportive family that has instilled a reverence and appreciation for the outdoors, for a mother whose spirit of adventure—along with her gun—was passed to me, for the opportunity to share this moment with my daughter, for being in the midst of such incredible rugged beauty. And then…SNAP!

Brush breaks to our left, and my heart quickens. I am alert and fully present. Nothing spotted yet, but whatever is moving in the mesquite keeps moving. It has not smelled our scent, not heard us, not seen us.

Anthony leans over and whispers, “Hold, but be ready to pull back yer hammer.”

He pauses and adds, “Sounds like more then one, so we’re gonna wait for ’em to get out here in the clearing, and then pick your target. Shoot like you did at the firing range and you’ll drop ’em like a sack of taters.”

A small bird in the sage behind us startles Mari and me, as he beats his wings loudly in a haste to skedaddle. Might it really all be over within in minutes of my first hour of hunting? All 40 years of waiting and wondering if I could pull the trigger? Done. Poof! Just like that?

“Mooooo,” bellows the Angus cow, as she appears through the mesquite and sage. She is followed by others, and calves, too, that romp and kick, and play as they enter the clearing. She turns towards us, staring intently. If a cow could laugh I think she would have busted her four guts at us hiding behind Cardboard Betsy. Instead, we were busted. Not by wild pigs, but domestic cows.

We gather the chairs, and Betsy, and head back to camp for breakfast.