Tips and Tactics: How to Hunt Coyotes and Other Wild Canines

Ever since the first caveman threw a spare bone to a curious jackal, wild dogs have shadowed us. But they... 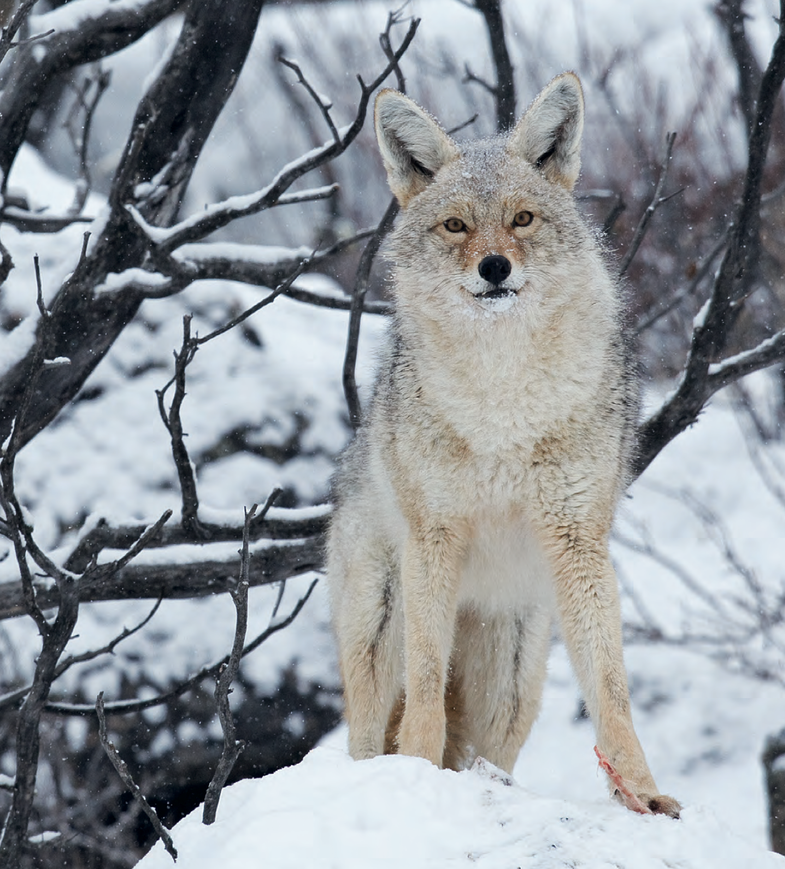 Ever since the first caveman threw a spare bone to a curious jackal, wild dogs have shadowed us. But they also infuriate us. Hunters who would risk their lives to save a fawn deer or rescue a turkey poult shoot on sight every coyote they see. Our persecution of wolves is even more intense and personal. But wild canines have thrived in our prejudicial midst, and their expansion has given hunters additional seasons and opportunities to pursue what may be the smartest and most adaptable of our wild quarry.

“Coyotes are the price we pay for living here.” That’s the way my neighbor, an old-school rancher, explained why he carried a dented-and-scarred Husquevarna .243 rifle in his pickup, which he used to fling hot lead at every coyote he saw.

My neighbor was reflexively acting on an ancient antagonism we have for wild canines. It’s not just a ranch-land grudge. Our antipathy extends around the world—to north-woods wolves, sub-Saharan jackals, the dhole (or “devil dog”) of India, dingos in Australia, the curious raccoon dog of Japan, the Abyssinian wolf of the original Bible belt, and even the furtive foxes of the high arctic.

We simply have it out for wild dogs, the equal and opposite counterbalance to the huge doses of hospitality and compassion we extend to our domestic canines. But a growing group of hunters is recognizing the value of hunting coyotes, foxes, and wolves not just to protect livestock, but for sport.
These are smart and cagey animals that exhibit great capacity for recall and adaptation, and they can live in nearly every habitat on earth. That makes them nearly perfect critters to teach us to be better hunters, because only when we do everything right—watch the wind, exercise extreme stealth, call correctly, and then shoot straight—will we consistently kill wild canines.

By that measure, North American hunters have more canine teachers than ever before these days. Coyotes, perhaps the most adaptable and widespread of the world’s wild dogs, have grown in number and distribution over the last 50 years, generally following the growth curve of the white-tailed deer.

HUNTING THE HUNTERS
Wild dogs all share a number of traits that make them appealing targets. For starters, they are pack animals, so where you find one, you’re likely to find more. Because they are carnivores, they respond to calls that imitate prey species, and because they are social animals, wild dogs respond to challenge and bitch-in-heat calls. And because they are so ubiquitous, a hunt for any other animal—antlered game, small game, upland birds—can instantly transition to an opportunistic canine hunt.

THE COYOTE BOOM
Coyotes have always lived in the Western plains and foothills and shared with foxes the woodlands of the Midwest. But their spread into the Eastern seaboard and Southeastern states is a relatively recent phenomenon. DNA evidence suggests these coyotes, which are prodigious killers of white-tailed deer, hybridized with Canadian wolves, and their expansion is especially vexing to hunters who cultivate food plots to enhance their local deer herds only to see a favorite buck taken out by coyotes. 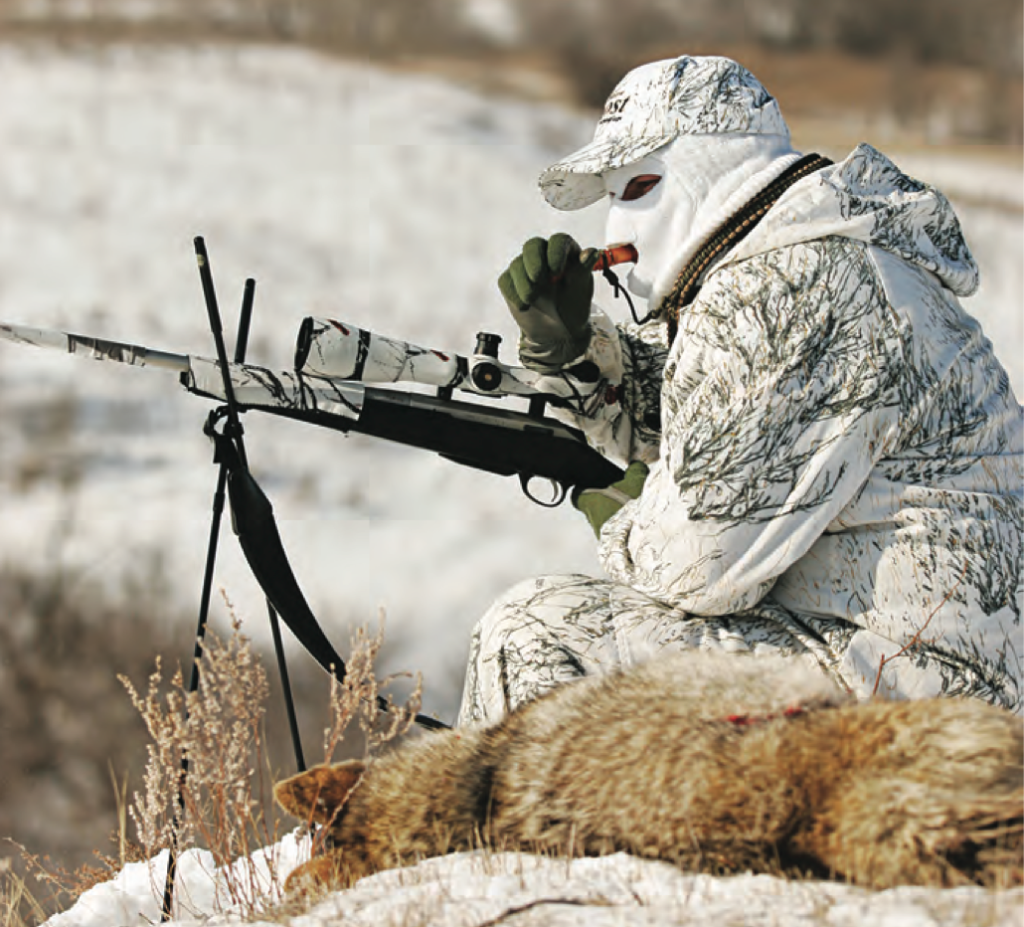 2. Challenge Call
These sharp, aggressive howls and barks communicate a range of various emotions, announcing that you are ready to fight and raising the hackles of local canines.

3. Gathering Call
These long, baleful invitation howls speak to a canine’s desire to coalesce as a pack.

4. Curiosity Call
These piercing, high-pitched calls sound like peacocks, woodpeckers, or magpies and are designed to pique the curiosity of scavenging canines.

WILD DOGS OF THE WORLD

Black-Backed Jackal (S. Africa)
The most widespread wild canine of sub-Saharan Africa, the black- backed jackal hunts and scavenges in the bushveld.

Golden Jackal (W. Asia)
Another coyote cousin, this adaptable canine is spreading into Europe from its native Middle East.

Dhole (India)
Sometimes called the Indian wild dog, this packing canine runs down blackbuck and axis deer on chases that can last for days.

Racoon Dog (S.E. Asia)
One of the evolutionarily oldest canine species, this omnivore feeds on insects, fish, and rodents—much like the North American raccoon, though it hails from an entirely different taxonomical family.

Dingo (Australia)
The iconic wild dog of Australia, the dingo preys on nuisance rabbits, rats, and kangaroos, but is considered vermin by ranchers.

Gray Wolf (N. America)
Fast reoccupying its historic range across the Rockies, the gray wolf is capable of traveling thousands of miles to find a mate.

Coyote __(N. America)
Capable of living in just about any kind of habitat, coyotes are smaller than most people think, topping out at about 35 pounds (16 kg).

Red Fox (N. America, Europe, Asia, Africa)
One of the most widely distributed canines, red foxes’ primary prey are mice and birds.
nocturnal canine of the American plains and desert feeds mainly on birds and insects.

Gray Fox (N. America)
Smaller and more compact than the red fox, grays have been known to climb trees for food and refuge.

Swift Fox (N. America)
This small, nocturnal canine of the American plains and desert feeds mainly on birds and insects.

Pampas Fox (S. America)
Think of this South American dog as the swift fox of the gaucho country.

Abyssian Wolf (N. Africa)
Similar in size to the coyote, this canine lives in the highlands of Ethiopia.

Bat-Eared Fox (S. Africa)
Primarily an insectivore, this fox uses its ears to locate prey. Its diet is mainly comprised of harvester termites.

PLAYING THE WIND
Whether you’re hunting foxes, coyotes, wolves, or jackals, the wind will either put fur on the ground or make you look like a chump. Of all the defenses canines share, their sense of smell is
the sharpest, and you should be prepared when hunting a wild dog.

If you are calling, set up in an area where you have good visibility downwind of your stand. Canines will almost always try to circle downwind of you to get a sniff of your identity. Expect to get a shot just before the dog cuts your scent and turns himself inside out trying to get away.