Tips and Tactics: How to Hunt Geese

JUST A GENERATION AGO, the hunter who bagged but one goose—be it a Canada, snow, or white-fronted—had cause for great... 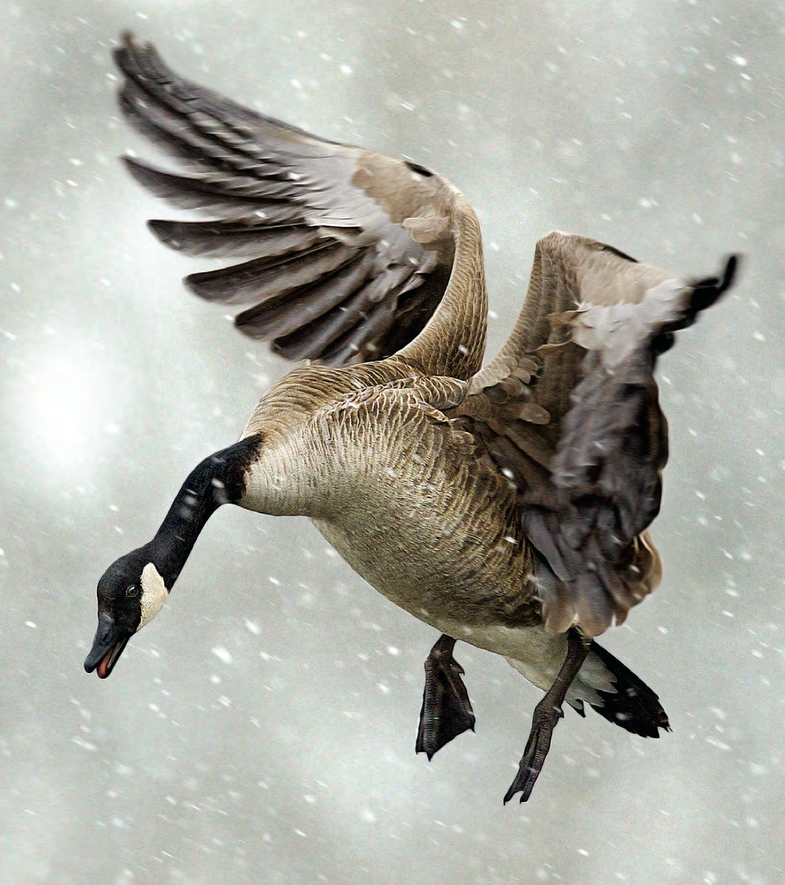 JUST A GENERATION AGO, the hunter who bagged but one goose—be it a Canada, snow, or white-fronted—had cause for great celebration. A goose was the epitome of success, as worthy of showing off as any heavy-racked whitetail. In modern times geese have largely forfeited this panache, owing to a population boom and, in turn, more consistent hunting. Do not be fooled: Geese remain one of the savviest, most challenging birds in the world. They are smarter than ducks, perhaps equal in wits to wild turkeys and, above all, they are still trophies.

Given that the prolific Canada goose is now considered a nuisance in many areas, it’s easy to forget that market gunning and other factors nearly led to its extinction in the early 1900s. Fewer than three decades ago, population expansion efforts were underway, which included reintroduction of Canada geese to many areas of the country. Suffice it to say, no municipalities want extra geese today. Thanks to conservation efforts and the Canada’s ability to adapt, resident populations now exceed 3 million nationwide. Management goals have thus shifted to control, affording waterfowlers a unique opportunity: nearly six months of semi-uninterrupted hunting.

Special resident goose seasons occur as early as August and as late as March, and limits are quite generous. In many states, seasons for migratory populations open soon after the first resident season closes and end prior to the second—it’s like three seasons in one!

Then there are the snow geese, which are hunted practically from the time they migrate into the United States until their return north of the Canadian border. Why? Despite an early 20th century population crash, snow geese have multiplied to the point they’re a threat unto themselves. The season is long, limits are liberal, and, in certain seasons, even digital calls and unplugged shotguns are legal—yet hunters practically can’t kill enough to please biologists.

Much has changed since the days when shooting a goose might’ve resulted in a local newspaper reporter knocking on your door. A diverse number of species are widespread and offer ample hunting opportunities. It may be human nature to glorify the past, but not for the goose hunter. This is the greatest era in which he has ever lived.

TO CALL OR NOT TO CALL
The decision to call—and how aggressively—is determined by the behavior of the geese themselves. If birds are approaching in a low, direct fashion, a few basic clucks to keep their interest may be all that’s required, and decoys will do the rest. If the geese are soaring at great altitude toward a destination, you may as well save your breath.

But if the flock is flying lower, changing altitude or direction, and includes birds that seem interested in breaking from the group, the geese are often callable. A loud hail call—consisting of extended, repeated kerrrrr-hooonks and best accompanied by flagging—will gain their attention. With any luck, a bird or two—usually juveniles—will peel away. Your mission is to keep their attention so as to draw the rest of the flock along with them.

Above all, read the birds. Their moods vary, and a well-developed hunter’s instinct is required. 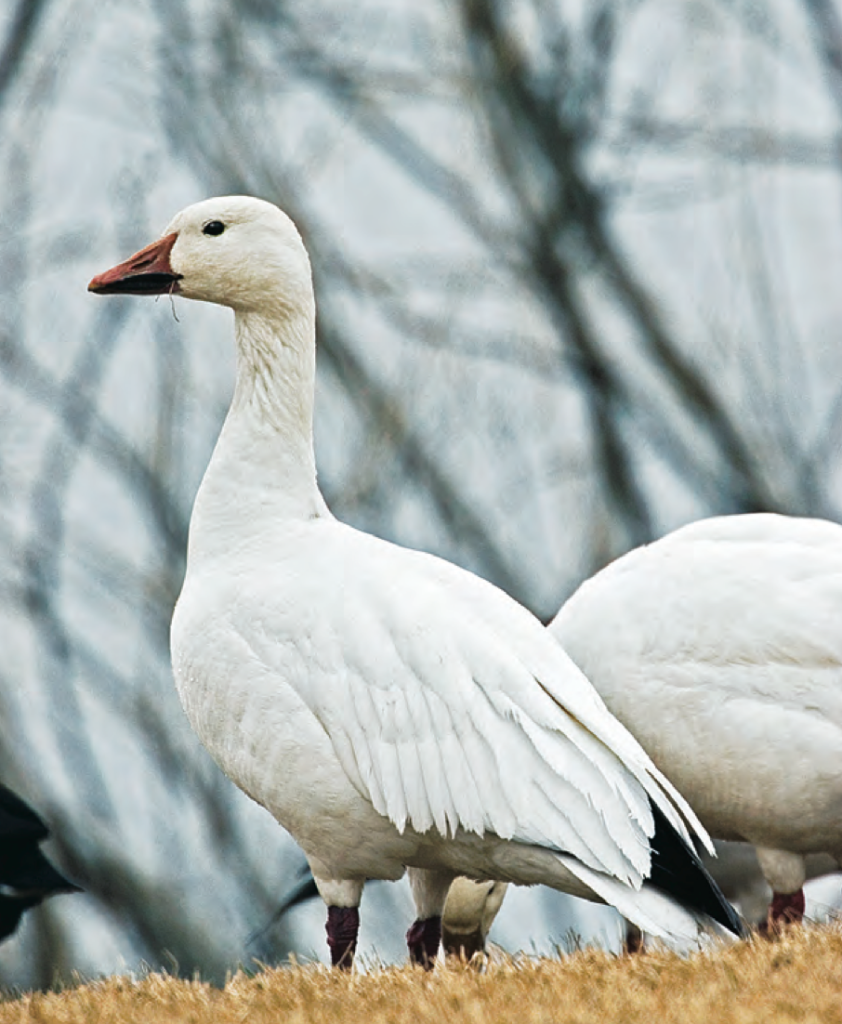 SNOW GEESE: THE ULTIMATE MEAT HUNT
Tradtionally, waterfowling hasn’t been the preferred choice of the so-called “meat hunter.” It requires great effort in scouting, assembling a decoy spread, enduring harsh conditions, and more—all for a few pounds of meat (if you’re lucky). That’s quite a contrast to shooting one deer or elk and instantly filling your freezer for the winter.

However, those seeking to feed a family ought to reconsider things now that spring snow goose hunting is available. The daily bag limit is 25 in many cases with no possession limit. Snow goose hunting is too difficult to reach those numbers, you say? Well, all you have to do is “hit the X” one time during the season—just one limit or even a few modest bags will provide months of meat. And, should you find yourself below a spiraling tornado of snows, your racing heart will assure you that truly this is the ultimate meat hunt. 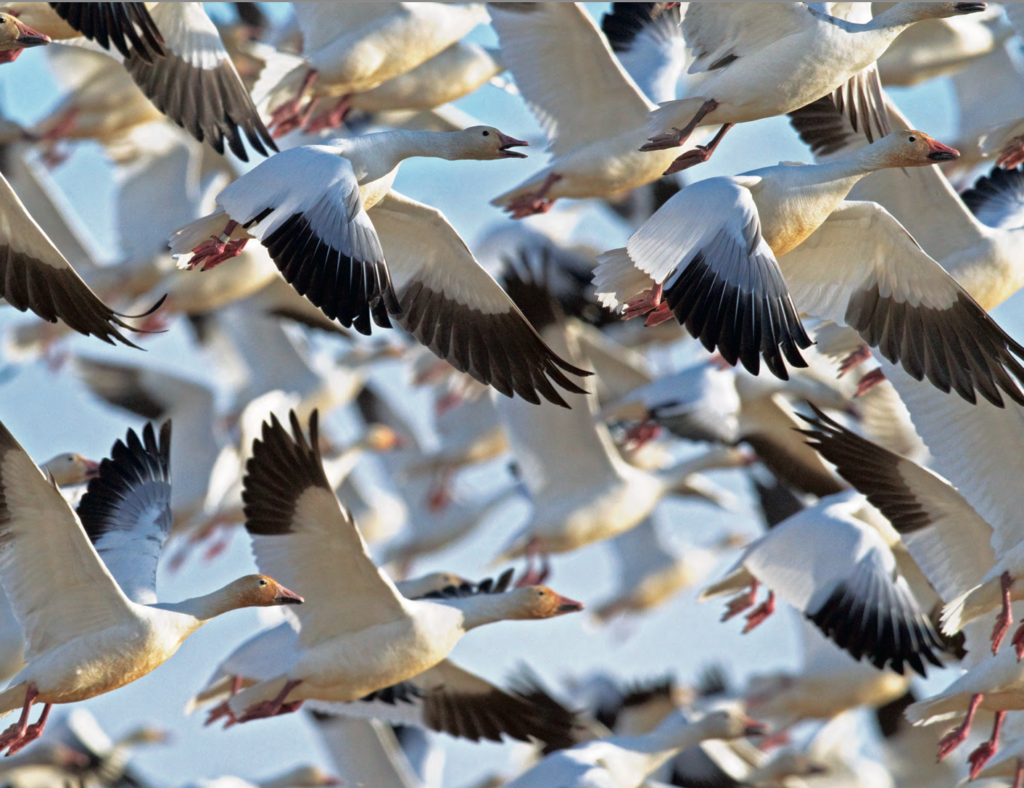 A THREAT UNTO THEMSELVES

The recovery of Canada and snow goose populations is among North America’s great conservation success stories. Unfortunately, the story may be too good to be true: Segments of both populations are booming to the extent that they risk their own demise.

This is particularly true of the lesser snow goose subspecies, which exceeds 5 million birds—a three-fold increase since the 1970s—and continues to grow
by about 5 percent per year. Biologists credit available waste grains and years of mild nesting conditions for this artificially inflated, nonsustainable population. Simply put, the birds are eating away their wintering and nesting habitats. So in 1999, special spring seasons began in the United States and shortly thereafter in Canada.

Resident Canada geese, too, are a concern. Exceeding 3 million in the United States, they do quite a bit of harm to soil banks and water quality as they linger in home areas. Resident geese also beget more residents by attracting migrating birds to their comfortable lifestyle. This is rather concerning given the more fragile nature of migratory populations.

A variety of management tools are employed to combat these issues, but hunting is easily the most affordable and effective method. Fortunately, many waterfowlers are happily answering the call. 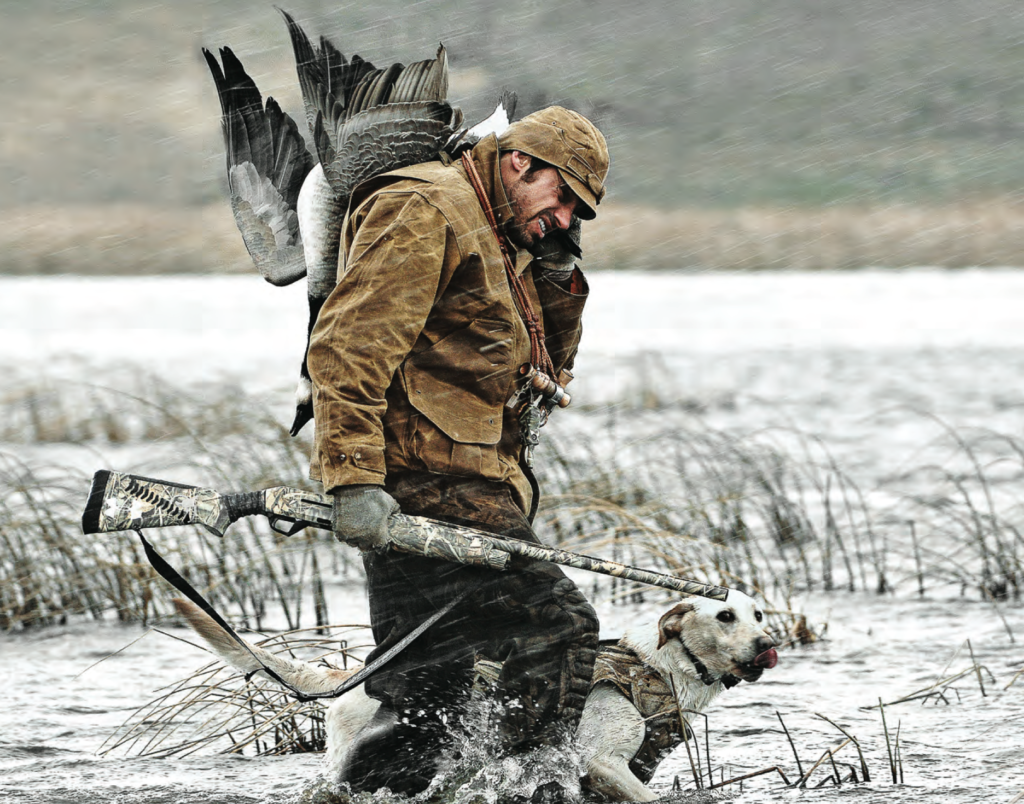 There are a variety of ways in which to hunt geese, but all share a commonality: The hunter who wishes to enjoy consistent success must find where the birds are eating or where they’re loafing—and ideally both. Therefore, goose aficionados spend nearly as much on gasoline as steel shot, checking areas geese are known to frequent and even chasing after airborne flocks to find their destinations. One clever trick is to grab a pair of binoculars, head into known goose country and find the highest nearby elevation. Your vantage aids the search for feed and roost sites, and in many cases geese will reveal themselves as they loudly, excitedly take flight. The mission is then to pursue the birds and find where they’re going while avoiding traffic citations.

Once geese are scouted, diverse strategies— ranging from casual to complicated—may be employed. Pass shooting is among the simplest, but it requires a knowledge of the geese’s most recent daily travel routes for any modicum of success. Assuming the birds cooperate, hunters need only a trusty, tightly choked shotgun, a box of shells, and perhaps experience with the Churchill shooting style in order to bag passing geese. Preferred loads often consist of B-shot or larger in a velocity sufficient to carry lethal energy at altitude.

More commonly, however, decoys are employed, generally in larger spreads than for ducks because geese are found in such congregations. A sizable spread often appears more natural to the birds and is a more visible draw, but be sure to tailor the size of your spread to the flocks you’ve scouted. During resident seasons, especially, a dozen or two may better mimic real birds on the ground.

Full-bodies are perhaps most realistic, but they’re also the most expensive and require a large amount of transport space—even a specialized trailer. Windsock-style decoys are easier on the wallet and offer the advantage of motion, but generally require a slight breeze for optimal performance. Traditionally silhouettes used to be wildly popular and, in fact, still offer advantage.
They’re comparatively inexpensive and when faced in a variety of directions, they offer the illusion of motion to circling birds.

Geese of all species have adapted well to modern farming practices and may be decoyed in corn stubble, wheat, soybeans, and other crops. Such feed sites likely result in the most consistent hunting. However, there remains something special about shooting geese in classic fashion— over water—as the splash of a 20-pound (9-kg) bird provides quite an exclamation point to a fine shot. Unlike ducks, geese go to water not to feed but to rest, so a relaxed-looking spread of full- body floaters accompanied by a few land-based decoys can be greatly effective.

Regardless of how you hunt geese, returning home with a bag justifies maximum satisfaction. You have conquered the wariest of waterfowl species, and you hold in your hands one of the sporting life’s great trophies.—Kyle Wintersteen 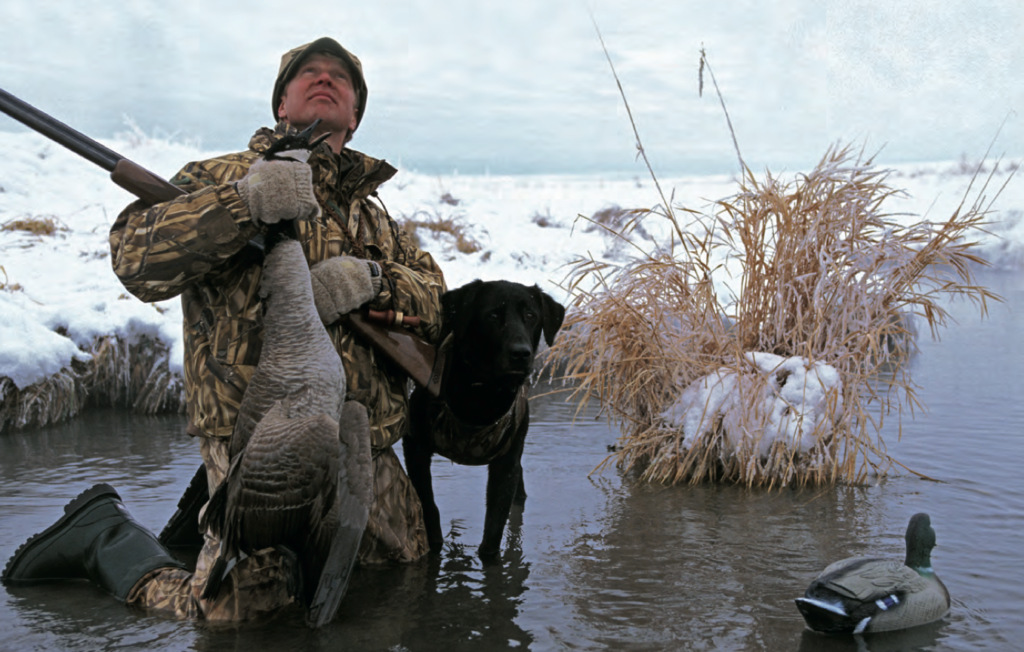 FIRST PERSON: THE BEST GEESE ARE UNEXPECTED
For many hunters, a limit of geese is a prerequisite to any favorite tale, but my most cherished memories have nothing to do with high volume. Rather, many of my favorite experiences hunting involve geese I simply did not expect to kill or even see. Given the smarts and survival instincts innate to the birds, such surprises are rare and exciting.

One such morning began on a favorite mallard slough outside State College, Pennsylvania. Two friends and I had assembled a modest duck spread, not even fussing with geese given we’d never seen them at the location. As a result, it initially seemed like a trick of the mind when we heard the lonely honks. Six giant Canadas crested a line of oaks and slammed on the brakes, audibly slicing the crisp January air. After a quick pass, they promptly landed to our right before thumbs could reach safeties. My friend Jake had never shot a goose, and conveniently the small flock had lit nearest him.
“Go ahead and shoot your first goose, Jake,” I offered, to which he nodded.

With a quick “Hey, geese!” Jake flushed the birds and promptly dumped one. Then something truly bizarre happened: Instead of taking any number of easy escape routes, the confused geese flew directly at us. We felled the lot of them.

Per our tradition, Jake had to carry his first goose— plus all of ours—out of the field. Never has a hunter smiled so broadly with 90 pounds (40 kg) of goose slung over his shoulders.

Goose hunting offers a rich diversity of birds, but the differences are often subtle. For instance, the seven subspecies of Canada geese include the Atlantic, Hudson Bay (or interior), giant, Moffitt’s (or great basin), lesser, dusky, and Vancouver. A 20-pound (9-kg) giant Canada is easily distinguished from a 6-pound (2.7-kg) lesser, but others require coloration, size, and regional clues. On average, the farther north a subspecies nests, the smaller it is; and while Atlantic populations tend to have light gray breasts, those farther west are incrementally darker.

Considered Canada geese until 2004, the four subspecies of cackling geese include the Aleutian, cackling, Taverner’s, and Richardson’s (Hutchins’). Most are found in the Pacific Flyway, while the Richardson’s winters in the Central.

The snow goose population is dominated by the lesser subspecies, but also includes the big-bodied greater. The “blue goose” is not actually a subspecies, but rather a color-phase of the lesser.
Ross’s geese are very similar to lesser snows, but quite smaller. Average weight is only 3–4 pounds (1.4–1.8 kg).

Pacific and Central Flyway hunters are treated to the white-fronted goose or “specklebelly,” a lovely bird with a barred chest that’s also superb on the table.

Lastly there are brant—dark-plumed, seafaring birds divided into two subspecies: the Atlantic and Pacific.