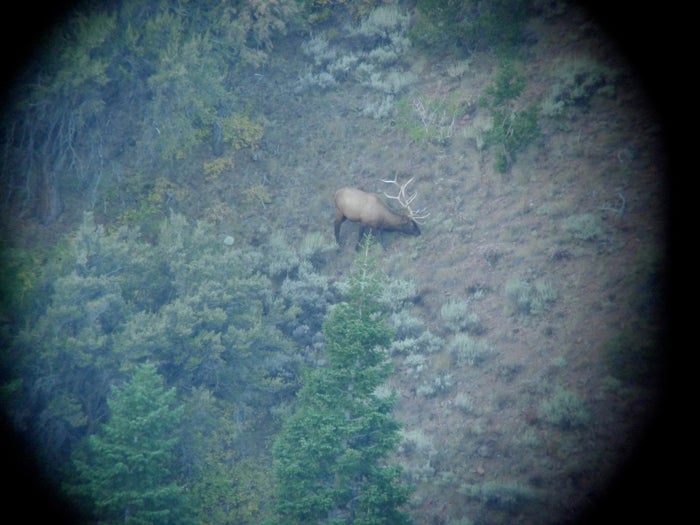 A beautiful typical 6x6.... exactly what Andrew's looking for.
SHARE

After our late morning wake up, we hoped the elk would be in the same place tonight as when we glassed them last night. Catching up on some extra sleep would be good for our motivation. We hiked back to where the elk had been just one evening before and found very little sign. We saw only one cow elk. After returning to the truck, we drove to a lookout and began glassing. Bugles started coming from below our location and pretty soon at least 5 different bulls could be distinguished. We drove home in the dark, stopping at least a dozen times to turn everything off and listen to them. At one point we were in the middle of a trio of bugling bulls.

We awoke today around 5:45 a.m. and quickly got packed and headed for a distant ridge we wanted to hunt. We’d been eyeing the ridge up since spotting cows there a few days previous. We stalked as silently as possible down through the aspen groves and grass openings. Elk started showing up and we worked our way to the edge of the ridge. I gave a locator bugle and three bulls

answered. We crossed one bull off the list because of the wind and worked our way towards the other two. What we had thought had been just below us turned out to be 1500 below! One bull ripped bugles from the ridge across the canyon and another from the floor near the creek. We decided to try to hunt the bull by the creek and then climb up the ridge to hunt the other. After descending into the rough canyon, Andrew and I found no trail, so we stayed in the creek trying to find our way closer to the bull under the cover of the noise from the creek. We came to a small opening in the canyon floor and I made a soft cow call. Immediately a low rumbling bugle lit up from under 100 yards away. The wind was perfect and we started in on him. It was loud traveling outside of the roar of the creek. As we’d make some noise, I’d cow call to announce to him that it was elk, not hunters headed his direction. This bull had to be stoked, he was in paradise, and the cows were coming to him!

I was scanning the aspens when I heard his bugle and saw the leaves shake… I couldn’t make him out in the dense foliage and trees. Andrew leaned in… “There he is, I can see his antler.” I found the antler and I froze, locking eyes through the leaves from only eight yards with the bull. Andrew made a few steps around to the right and began to draw his bow. The bull, a 340″ 6×6 spun with the movement from Andrew’s direction and was off, presenting Andrew with no shot. Bummer. As the bull spooked, he ascended the rocky ridge we had planned on climbing, quieting down the chatter from the elk up there along his way. What a great experience! To have that bull so close to us, thinking we were elk as he was bugling his head off from his bed, to the crazy descent approach and resulting climb out of the canyon, wow!

Throughout the course of the hike out of the canyon, we found ourselves within 40 yards with eight different bulls. Andrew had a gorgeous six point at 35 yards, but a limb covered the bull’s vitals, in the end he was forced to let down. So many encounters and the bulls continued bugling until 12:30 p.m. This evening we stayed home and enjoyed the sounds from an hour-long rainstorm with our nap. We’re almost spent and we still haven’t accomplished our goal here.