>>SEE PHOTOS FROM TODAY HERE! We nicknamed him Houdini. He first caught our attention early Saturday morning, just before sunrise... 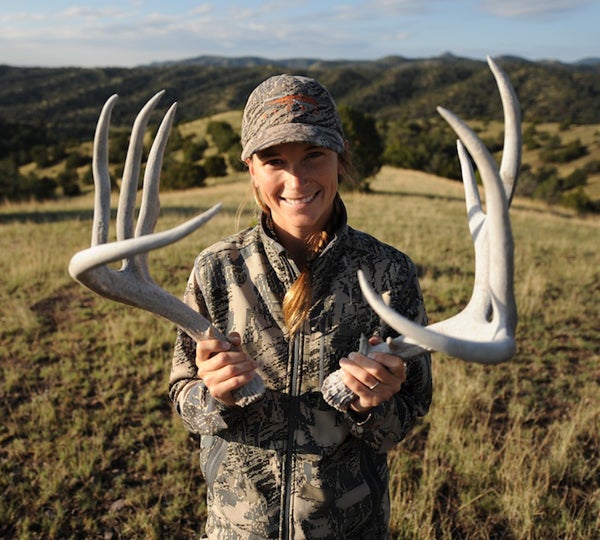 We nicknamed him Houdini. He first caught our attention early Saturday morning, just before sunrise as daylight neared the eastern horizon. We planned to hunt a ridge on the southern side of a draw we had been focusing on over the past few days. I pulled the truck into a dry wash and quieted the engine. In silence, Katie and I slipped on our packs and adjusted our optics. I pointed in the direction we were headed and off we went. In stride, I glanced over my shoulder and was surprised to see a good size bull skylined on the ridge behind us. I ranged him at 157 yards. He must have been watching us since we arrived. Deciphering only his silhouette, I could tell he was a good bull, probably a six-point, and definitely the best we’d seen yet.

The morning was noiseless and still quite dark. We could see the bull perfectly on the ridge and I snuck closer to watch him. In the few short seconds I had to avert my eyes to maneuver over a barbed wire fence, he slipped away, without a sound. Arrow knocked, I took off up the hill concentrating on making silent movements and trying to anticipate his plan. Katie and I crested the ridge and it opened up to shallow coulees and broad pinon sprinkled meadows. I motioned for Katie to stay low and hike up the coulee that snaked up to the west. I stayed higher in a parallel position that I believed created the perfect bottleneck eliminating any escape for our bull. Within a few minutes, our paths crossed at the head of the coulee without either of us finding him, his prints or hopeful sign that we were on the right track. He had vanished with no place to go… no sound, no movement. Just Poof, and he was gone.

The morning hunt lasted a few hours. We saw two more bulls, small five-points, keeping themselves busy with a handful of cows apiece. The temperature rose with the sun and we eventually retired back to camp. The animals would be bedded down until the evening.

A restful nap followed a heavy breakfast of eggs and bacon. We rose excited to get back into hills and to where we hoped our bull was waiting. This time we drove further back into the draw, a good half-mile from where we’d been on him in the morning. Hopefully we could surprise the bull as he was coming out to feed. We took the closest coulee to reach the ridge. I wasn’t hiking for more than twenty seconds before I saw a large brown body rise near a tree… again out of bow range and over 150 yards away. A similar plan was made, with no known place for the bull to escape. The wash was no more than 60 yards wide at the most. If he came out above me, I’d have a shot. Across from me, I’d have a shot. Below me, I’d have a shot. Katie hiked up the wash as I once again paralleled higher waiting for her to flush the bull out. We met again at the top, this time close to twenty minutes later with shoulder shrugs and puzzled looks. Katie had seen his tracks as they crossed the wash, but they seemed to suddenly disappear. He had mystified us once again. He was Houdini.