Day 8 The last few days have been awesome! We’re into elk every morning and every evening. The cows are... 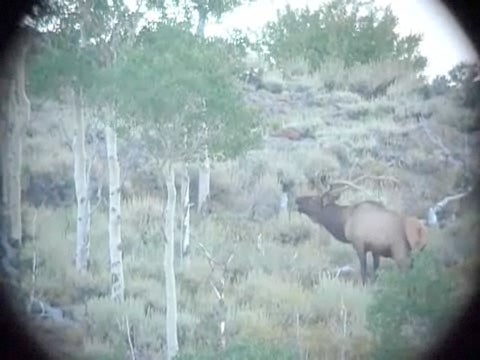 The last few days have been awesome! We’re into elk every morning and every evening. The cows are starting to bunch and the bulls are about to get fired up. We made our new camp in a great spot. We’re actually hunting right out of the tent.

Here’s the morning of day eight…

We woke up late, 6:18 a.m., and were dressed and hiking (sans breakfast) by 6:29 a.m. One minute early. We woke up by climbing the aspen and pine-covered mountain directly west of camp. The entire hike we were glassing elk in every meadow we could see. Low, rumbling bugles came from high on the mountain and we raced the sun to the elk. We lost… One minute late. After a brief rest and glassing session just below the summit, we decided to bushwack some dark north facing pines on a steep ridge to our south. We found great water and five huge elk beds sprinkled amongst shattered saplings. Also, another big key – there were no bugs. Bulls had been here, but not for a few days. We returned to camp around 11 a.m. dead tired and spent. On the mountain we had visions of biscuits and gravy, but we ended up eating only a little fruit before passing out for four hours. I woke up to the sounds of Troy making hot dogs for lunch and pounded three of them while I packed for our evening hunt.

We decided to drive some roads and glass. Fires from southern Utah have sent a ton of smoke our way and it’s hampered our ability to glass long distances… not good. So we took to the roads. We’ve seen more elk while driving around learning this place than during our hikes into the roadless reaches. We went to a spot where we had previously spotted a big bull with cows… right on the road… and dove in. We hadn’t gone 300 yards and we were bumping cows from their beds. We ended up calling a calf into 4 yards. The little guy stared holes directly through us and walked around our group, calling the entire time. One of the best moments of the trip so far. We also found a watering hole and watched thirty cows, calves, and one raghorn bull at the end of the evening for 20 minutes. Great day.

6:12 a.m. Late again, but in the truck and moving by 6:30 a.m. We’re getting a little too good at the late wakeups. It’s time to kick it into gear. We ended up heading to a great spot close to where we’ve been seeing the 6×7 330″ bull. More great country, but no elk. When we were almost back to the truck, we spotted a cow and herd a few bugles in some dark timber above us. It’s amazing how hearing a bugle revives tired hunters. In the end we decided to pull out and drive around the corner to glass. Soon enough the cows fed out through and opening, but the bull never left the timber. He sounds big, we’re planning on going back. In camp for lunch, Andrew cooked up his “Southern Style” Biscuits and Sausage gravy. Even with 15-day old biscuits, it was still delectable. You’ve never seen food disappear faster.

That afternoon I fletched a few arrows for my longbow, took a nap, packed, and once again we were off. Tonight’s mission would be glassing with Josh since a northerly wind blew the smoke off the mountain. To get to hunt a great bull, first you have to find a great bull. From two vantage points, we spotted over 250 elk. Bulls were rutting on the other end of our spotting scopes more than once. We saw what we think could be a great bull, and we’re headed in after him tomorrow. He’s been wallowing and is covered with mud. This is going to be fun.

*It should be known that while I typed this Andrew cooked us a steak and potatoes meal that I enjoyed along with a cold beer. Life is good*