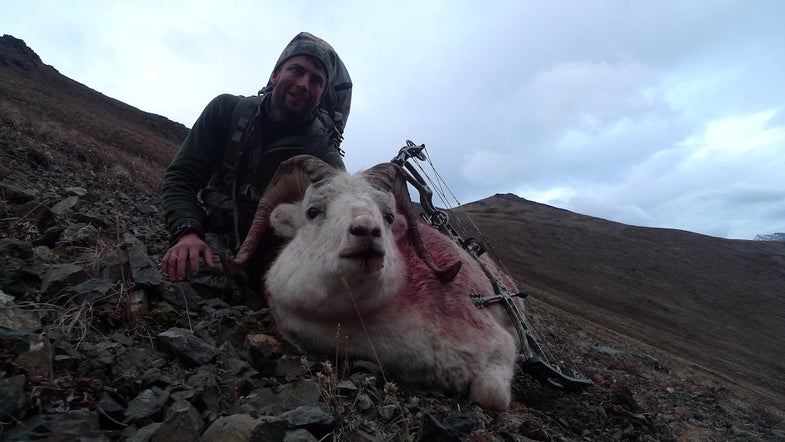 We’d just spooked the ram, the biggest still left on the mountain. The winds had been going straight uphill in his direction all morning, but we had no choice, this was day nine, and we had to make an attempt. Our long distance game of charades confirmed our suspicions. Through the spotting scope Lance observed Jake give us the “Gig is up” signal…. we were dejected and took it hard. It was still only three in the afternoon and Lance left little time for us to wallow in our depression, it was time to move and he meant business now. For the past 6 days we’d observed great rams, all in the 9, 10, and 11 year old class… monster rams. We would spot a ram and wait for the opportunity to arise for us to make a stalk. We had some close calls and some near misses. We stalked one 11 year old ram for two consecutive days and had opportunities at 35 and 27 yards that didn’t materialize into a punched tag. We’d hiked off the mountain in the dark the last four evenings and with only two days left in the hunt, it was time to seal the deal. As Lance headed off in the distance, I looked to Nate and asked him if Lance had shared the “Plan” with him, he hadn’t, but Nate suggested we were headed to the distance mountain pass and over. I was beat. It was all I had to keep up with Lance and Nate the rest of the afternoon, that as luck would have it, extended much longer than any previous day, we’d be coming home with heavy packs well after dark tonight.

We rounded the pass and dropped into the basin and were immediately hit with 60-70 mile per hour winds… you could almost lean fully into the wind without falling down. We hadn’t gone very far down the mountain when Lance stopped and asked me to get out the spotting scope and tripod, we had rams in sight. It was confirmed, two younger rams on the distant ridge separating the basin we were in with the next one in the range. We watched as the rams slowly fed over the ridge, uninterested with our presence and unlike their older and larger brethren, not spooked. “What was that quote Jake had recited?” Nate asked. I couldn’t quite remember the exact quote but I did remember it was Dumas and it went something like “A man will see his dream come to fruition with luck, if his courage holds.” I told him. Nate’s got boat loads of courage so it was time for the luck to kick in. We hiked over to the ridge and continued up to the pass the rams had gone over. Once again Lance had a ram spotted almost immediately and we set up for the stalk. I stayed back, glued to the ram through my binos, ready to signal Lance and Nate if they needed my help. The winds began to really rip through our pass and I was able to watch the entire hunt unfold only 150 yards from both the ram and the boys.

The ram was feeding just below a small rise in an otherwise blank hillside. I watched as Lance and Nate waited for him to feed just out of sight before continuing on their stalk. I was wearing every layer I had with me, comfortably nestled in-between two rocks on the ridgeline. From my vantage point I glassed as Nate and Lance were forced to deal with the sting of the winds with no shelter for twenty minutes while the ram fed unknowingly below them. After twenty minutes or so, Lance glassed me to ask if I could still see the ram, I couldn’t and I gave him the signal. This is what Lance had been waiting for the whole time. He then began the stalk by crab-crawling down amongst rocks no bigger than cantaloupes on the open hillside. It was a masterful approach. Just as the ram fed over the ridge and I gave Lance the signal, I hustled back to my pack to grab the spotting scope and D-Lux 4 to hopefully capture the moment. I had no sooner returned to my overlook and put the boys into the scope when it was clear that they were about to take a shot. As it turns out from only 34 yards! I put the camera up to see Nate at full draw, capture the shot and see his immediate fist pump! I knew he had just connected on his ram. Lance handed Nate another arrow and with one more well placed shot, Nate had accomplished his goal of harvesting a Dall with a bow!

I really admire the spirit both Nate and Lance showed during this hunt. Giving up never even crossed their minds. Lance had put us on some AMAZING rams. At least three would have been in the top 50 ever taken with a bow if we had been fortunate enough to harvest one. In the end it wasn’t a monster we connected with, but it didn’t matter to us in the least. Nate put things in perspective when he said; “Sheep Hunting is a journey, one that I am just beginning, if I would have killed the “Swirl” on day one or one of these other monsters I wouldn’t have deserved it. There will be more hunts, and this one was amazing!”

This year Lance’s hunters went 16 for 18 hunting Dall Sheep. The overall success percentage for the archery tag that Nate had is 3%. We overcame tremendous odds, covered tons of miles, and never lost our appreciation for our surroundings nor the animals we were hunting. We formed new friendships and solidified old ones, we hunted hard and never gave up. Nate realized his dream…. he got his ram, and an unbelievable experience in the process.

If you’re interested in chasing your own dreams of hunting Dall Sheep in Alaska with a bow or rifle, for the 2010 application and draw the State of Alaska is implementing a new policy and you are REQUIRED to have a signed contract with a Licensed Outfitter in the area you’re trying to apply BEFORE YOU DRAW. Lance Kronberger guides in 14C (the Chugach) and the famous Tok Unit for Dalls.

I’ve linked directly to the application form necessary to draw your Dall tag and hunt with Lance here.