I’d hunted six days in the last week, I figured rest days were meant for a time they call….. December.... 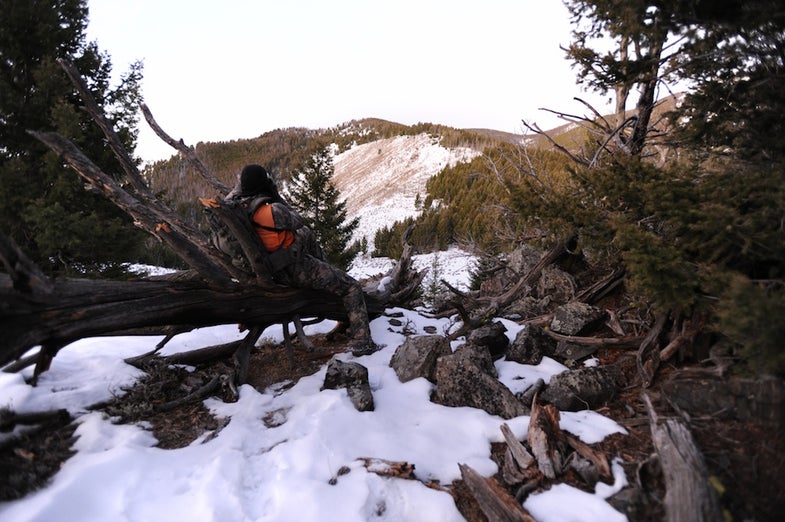 One of my favorite "honey holes", this spot has been a consistent producer for elk for many years. Tough access and rough country mean fewer people and more elk.
SHARE

I’d hunted six days in the last week, I figured rest days were meant for a time they call….. December. I was running out of time and with only five days left in the general Montana elk season, I had groceries on my mind. I set off for a three day ski supported backpack hunting trip… the snow began falling heavily as I left the house at 3:00 a.m. and my attempt to reach the trailhead was thwarted by the deep snow on the road. I managed to get my truck stuck three times trying to force the issue. In the end after four hours of frustration and 2.5 miles of driving in reverse before I found a stop where I could turn around, I was lucky enough to spot 20 elk on the mountain across the canyon from me…. thank goodness! I pinpointed their location on my map, figured out the access point I’d be using the next morning and went home to rest for the next day.

I told Katie when I returned home that we’d be closing the deal tomorrow, we had elk spotted in a location where they’d no doubt be in the morning… a few thousand feet from the valley floor in a Montana Wilderness area. She said she wouldn’t miss it!

We woke early, a feeling of anticipation greeted us along with some strong coffee. Leaving the truck at 5:15 a.m., we spent two hours hiking through calf deep snow to gain the ridge across from where I’d spotted the elk the day before. At shooting light (7:13 a.m.) we were glassing the opposite hillside in search of the cows…. we found nothing but tracks. We had to go higher. The wind began to blow hard and windblown snow stung our faces as we trudged up the ridge. We came to an overlook and I took a brief moment to glass… I found two cows feeding in the timber. I ranged them through my Geovids… 1146 yards, perfect, time to move. When I put down my binos on another hillside farther away, I spotted a six point bull working his way through chest deep snow headed for the timber… YES!!! I pointed him out to Katie and she said “Let’s go get him!”

We had to cross into the opposite drainage to access the basin where the bull had been spotted. The cows were also headed into that same basin so I was feeling very confident about our chances. I haven’t had an elk tag this late during Montana’s elk season in a long time. My foremost goal during elk season is to harvest ANY elk. I start the season by chasing bulls with my bow, not settling for any bull, I enjoy the challenge of finding a great one. If I don’t find what I’m looking for during bow season, I take the same mindset into the first four weeks of rifle season. At a certain point the long days and tough miles begin to catch up with me and when the time for chasing these bulls is over… I turn my focus to the freezer and finding ANY elk. Filling my tag becomes my goal. I’m not a “Trophy” hunter… I’m an “Experience” hunter.

With this in mind as we crested the final hill, I reached the crossroads of my elk season… while making our way towards the basin I told myself I wouldn’t pass up a guaranteed cow just for the chance to chase that bull… not with only five days left in the season. Moving slowly and glassing as I went, I spotted the elk bedded in full view on the open hillside in front of us. Using a tree as cover Katie and I glassed the elk… we could see two elk, one cow and one raghorn bull. I ranged the cow…. 351 yards. With plenty of time spent with my .300 Weatherby and not a single tree between us and the elk, I knew this was as close as I coould get and that I was well within my range. I took one final look at the small bull and told Katie I was going to shoot the cow… she immediately said “What about the bull?” “We’ll get him in a few years”, I whispered.

With a view of both the cow and the bull bedded in my scope, I prepared myself for the shot. I slowly exhaled and settled my 300 yard cross-hairs just a touch high on the cow’s vitals. The crack from my rifle echoed throughout the basin. As another cow emerged and stood with the bull, we all watched as the cow fell from her bed and slowly slid down the snow covered hillside… There was no movement during the slide, she had immediately expired from the well placed bullet. Now the work would begin.

We were just over four miles (as the crow flies) from our truck. We wasted no time and began to quarter and bone-out the elk. When it was all said and done, Katie and I each had full packs loaded to the gills with elk meat. In our garage after returning home we put our packs on the scale… Katie’s Longbow weighed in at 65 pounds and my Crew Cab weighed 130 pounds! What an effort.

As we neared the end of our epic hike out of the wilderness, Katie turned to me and said “You know I’d much rather have done it this way than shot something close to a road, I really feel like I’ve gotten the chance to experience something amazing today!” I couldn’t agree more. What a great experience! I’m already looking forward to next year’s elk season. Now it’s time to enjoy some great elk steaks…. I better get these tenderloins in a marinade.