After the late night, we only got a few hours of sleep before the alarm blared. We quickly ate a... 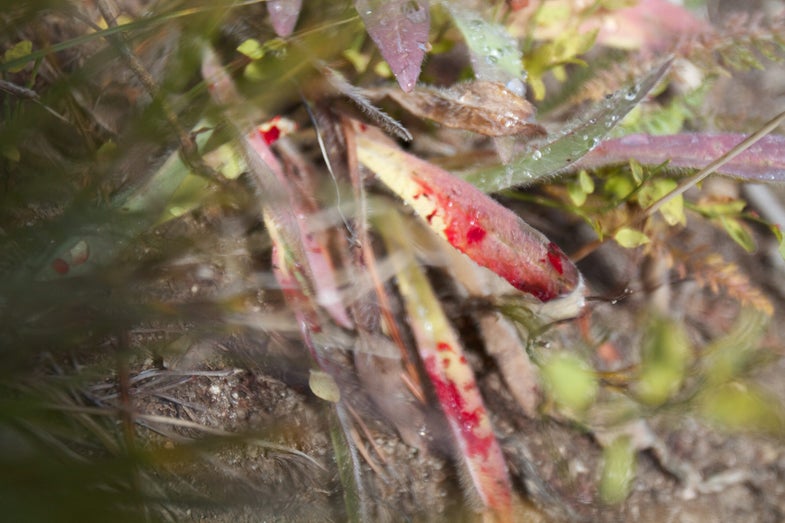 After the late night, we only got a few hours of sleep before the alarm blared. We quickly ate a light breakfast, drank some coffee and headed back up the mountain. This time we decided to stay out of the basin and work our way along the ridge above the basin. We made the pull up the steep mountain and we spaced out along the game trail above the basin when I spotted a bull heading our direction on the mountaintop! Wow, that fast and easy I thought. I got down, whistled back to Chris behind me to get down and signaled to him to sneak up to my location.

Les was about 50 yards behind us and spotted Chris get down, so he did the same. Les was able to watch the bull heading our direction and settled in for the show. The bull was a beautiful 6×6 with dark antlers and white ivory tips… somewhere in the 290-305 range, he was a perfect candidate for Chris’s first archery elk so Chris got into position and I prepared to do some calling.

Most of the really big mountain bulls I’ve hunted don’t respond well to calls so I hardly call when I’m hunting them. But younger bulls like this, especially the love sick guys who’ve been kicked out of the herd by the dominant bulls respond REALLY well.

The bull worked his way toward us and stopped to fire a bugle into the basin below. I responded with a soft cow call and he immediately bugled in our direction and headed our way as if on a rope! From Chris’s location he couldn’t make out the bull, but I motion to him to get ready and that the bull was headed our way. Bulls really key into cow calls and their location, so I slowly crept farther away from Chris into the small patch of timber, letting the bull know the “cows” were headed in the other direction.

He better get moving if he was going to join the herd. My ploy worked perfectly. I could see the bull nearing Chris’s location, but lost him in the trees as he worked his way there. The next thing I saw was Chris walking my direction shaking his head. “What happened?” I asked him. “I hit him, but it was forward, I think in the shoulder” he told me.

I asked him how much penetration he got on his shot and Chris explained that he figured only eight inches of his arrow was visible. I thought perfect, his broadhead had to hit vitals with that much penetration. I worked my way to a vantage point to look into the basin to see if I could spot the bull, but I couldn’t find him.

I did however find 7 bighorn rams. One was way beyond a legal ram, the biggest ram I’d ever found in this portion of the wilderness … note to self. We replayed Chris’s shot and when back to where he was and where the elk had stood 23 yards away. Chris explained that the bull was working his way just below him, he drew his bow when the bull reached 30 yards and waited for him to come below him. At 23, the bull stopped quartering away, and just as Chris let his arrow fly the bull spun downhill. This is not good on a quartering away shot, but hopefully his arrow flew true. Only time and a tracking job stood between us and the fate of Chris’s bull.

We waited for 45 minutes before looking for blood. The rain from the night before would give us good tracking on a heavy bull running down into the basin and his tracks were easy to follow. We immediately found good blood and the tracking job began. Initially the blood looked great and we had high hopes that Chris’s arrow had found it’s mark. We took our time and would mark each spot of blood with a person until we found the next blood.

Blood was good and frequent for the first couple hundred yards, but then it was really tough. I’ve NEVER lost a bull on a hunt I was apart of and didn’t want this one to break my streak. The blood went from big drops on the ground to small specs on leaves quickly, and I knew the hit had been in the shoulder, probably tight to the scapula and in the muscle based on Chris’s description of the shot, crap.

We didn’t give up and between the three of us spent a ton of time on our hands and knees searching for blood. At times, the spacing between blood was over 50 yards and each subsequent finding took hours. Over the next six hours we had only tracked the bull for .47 of a mile, before the blood trail was non existent. We searched for another two hours after we found the last blood sign, but our worst fears came true, it was a poor hit and we weren’t going to find the bull.

This was my first experience ever losing an elk on a hunt and I’m still sick about it. Even though my arrow wasn’t the one still in the elk, I was on the hunt and somewhat responsible. At times during the tracking job, I’d be on my hands and knees, SMELLING for blood, that’s how tough it was. I’d find microscopic specs of blood that would keep us all in high hopes, but in the end we’d be forced to head back to camp unsuccessful.

Chris’s opportunity was pretty much the end of our trip. We hiked out of the wilderness the next afternoon. Everyone was extremely disappointed and it didn’t sit well that we’d hunted so hard and then wounded a bull.

I was thankful to have friends such as Les and Chris who care for these animals as much as I do. We won’t soon forget what happened out there, and I know Chris has a heavy heart about what transpired. I’m hoping another hunter will find our bull or that the wound he’s dealing with isn’t fatal and that he recovers fully. If I don’t get another chance to hunt with my bow again this season in Montana (I’m leaving tomorrow for my muzzleloader hunt in Utah), I’ll be looking for him with my rifle come opening day.