Back on the Mountain in Montana

Sorry to leave everyone hanging … it’s been another tough few days on the mountain. After my last blog, I... 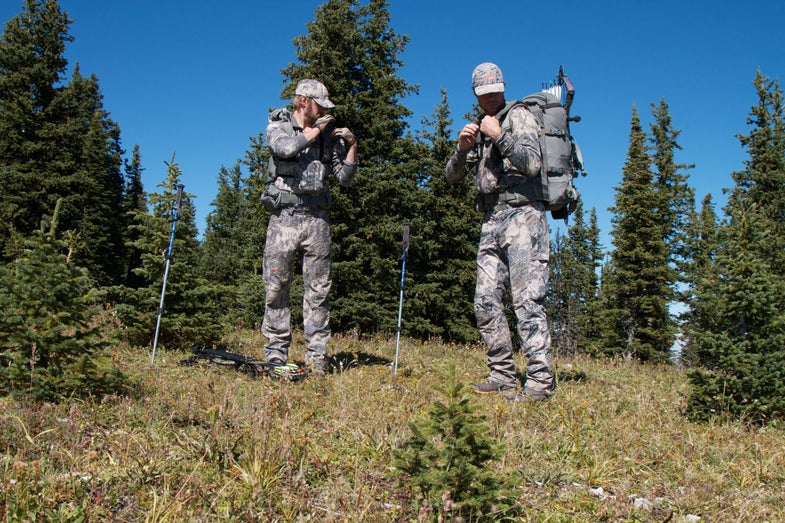 Sorry to leave everyone hanging … it’s been another tough few days on the mountain. After my last blog, I put away the computer and headed back up to the high country. I hiked in to the same area I’d spotted the 6×6 and Mr. Big a few days before and set up the spotting scope. It wasn’t two minutes later, when I found the 6×6 and his herd of 34 cows bedded down low on the mountain.

They must’ve followed my lead the evening before and retreated from the high saddle and down into the basin for some relief from the storm we experienced together. I held off for a bit before making a stalk to see if Mr. Big would reappear… no sign of the monster 7-point, so goes hunting on public land, you have to make your chances count and I wouldn’t see Mr. Big again on the hunt.

Watching the 6×6 bed down with his cows just below the spring, I quickly made a plan. I was about two miles from their location (as the crow flies) according to my gps, but I had to descend 1,500 feet on the ridge I was on, cross two drainages, and climb 2,000 feet to where they were located. It was time to hustle.

I emerged from the timber 200 yards downwind from their location 63 minutes later. Whoa, I was worked.

I spotted a couple cows feeding there by the spring and slowly stalked closer to their location. I had a herd of seven mule deer does between me and the elk so I was really patient. I had five hours of daylight left to get it done. I snuck to the last stand of timber between me and the herd and I could just make out the 6×6’s antlers bedded on the other side of a small depression, 137 yards away. The deer and a few cows lingered between me still, negating any chance of a stalk for an hour. The cows eventually fed over the knoll and the deer moved on, giving me and the bull some alone time. I headed his way. I lost sight of him for five minutes while I worked my way up the hill, trying to get between him and his cows.

During that time he decided to follow the cows and I was surprised by him walking through the timber in front of me at 70 yards. No shot presented itself, but I was ready with arrow nocked. He took his cows up the hill a bit to some timber on another ridge and I got in position to wait him out again.

The cows decided to split into two groups to feed, leaving the bull to bed on the little ridge in plain sight of both groups. Perfect, another chance was brewing up quickly. I patiently waited for the cows to feed and slowly crept toward him. He was still bedded on the ridge and I got a range at 92 yards. I had only 40 more yards to close.

I kept telling myself, 39, 38, 37 more as I stalked in. I was 54 yards from the bull when he decided to get up and move toward the group of cows to my left. I quickly changed direction and set course to cut him off. This was going to be a my shot.

That’s when it went south in a hurry. He was taking his time on the ridge and I had just ranged him at 52, set my slider at that distance and was preparing for a shot when three angus cows came running between us, the bull looked at the cows, I looked at the cows, and the chance was gone just like that. So goes hunting on public forest service ground leased by cattle ranchers. The bull worked his way onto the ridge and I followed, but my opportunity was gone as he went down the other side into the timber where the wind wasn’t on my side.

Once again I was patient and let him go. I’d be back in the morning ready to go at him again.

That night I was joined in camp by my brother-in-law, Optifade Athlete, Andrew Crow. We packed our gear for a bivy hunt and slept in the truck that night at the trailhead. The next morning we were off, aiming for a high ridge that would give us access to three different remote basins. There was lots of glassing from up top and hopefully we could find another monster bull to hunt. The hike along the ridge took us most of the day, and we’d periodically stop to glass and found a host of shooter mule deer bucks, but until late in the day we didn’t see any shooter bulls.

We found a couple good bulls I hadn’t seen previously and decided to set up camp high on the mountain. It was a great night and I was stoked to have one of my best friends on the mountain for some great company. Hunting alone takes it out of you and having Andrew there was a nice change. The next morning we couldn’t find a thing, no bulls anywhere. It was Sunday, and the increased traffic from weekend hunters had quieted the bulls for a few days. With no other elk to chase and a long drive back to Bozeman ahead of us, we chose to skip the evening hunt, pack out the five or so miles we’d come in, and head home.

My plans now are to do a quick day hunt and glassing mission tonight and then I’m heading into some of my favorite honey holes in the Lee Metcalf Wilderness tomorrow with my friends Les Hausauer and Chris Maki for a five-day hunt. I’ll be carrying ALL of the computer/photo/video/satellite equipment with me for the trip so look forward to updates every evening.

After this trip, I’m headed to Utah to chase elk with a muzzleloader, which will most likely, be the highlight of my hunting season. It’s getting exciting! Keep tuning in!