What an amazing first day! After harvesting my first mountain caribou and sending in a quick note to everyone here... 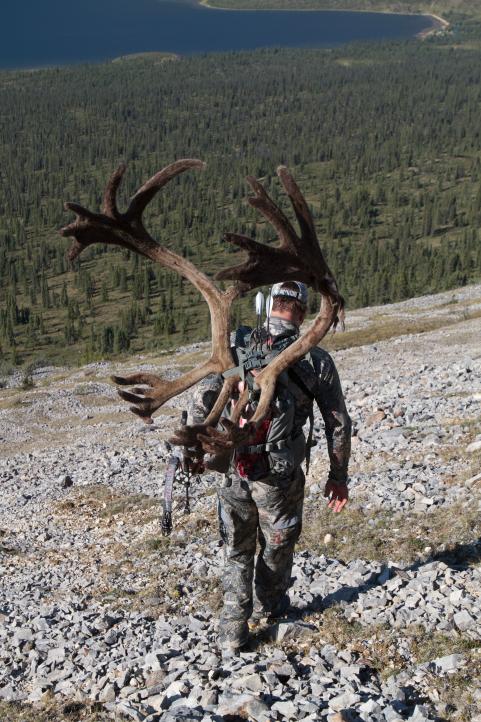 What an amazing first day! After harvesting my first mountain caribou and sending in a quick note to everyone here at the Live Hunt, I loaded up in the Super Cub and headed for our remote gravel bar landing strip. Upon arriving at the strip, our guide Jeremy Hatala, already had an amazing ram in the spotting scope. Due to hunting regulations in the NWT, you have to wait 12 hours after flying in a plane before you can hunt, so we crossed the river and headed to Camp #1.

Once we made it to camp, we set up our Hilleberg Tents (Allak, Unna, and Akto), and glassed the ram for the rest of the evening. First thing in the morning we headed up the mountain to see if #1 was in a good position for a stalk! We ended up finding a couple more rams with him, but unfortunately they weren’t in a bow hunting friendly spot on the mountain so we spent the day glassing and familiarizing ourselves with the mountain.
The next day we were back on the mountain and this time the sheep were cooperating. The biggest ram, #1, had pushed the second biggest ram (Broomy) off the ridge they were on so now we had two shooter rams in two different hunt-friendly spots … sweet. Tom and Adam made the decision to try for Broomy first. The ram ended up bedding in a great spot and the boys worked their way into a stalking position. What happened next was very unexpected. The ridge was really tiny, maybe 50 yards wide, with a strip of timber running its length. As soon as Tom/Adam disappeared from view, the ram decided it was time to move out … heading straight for the guys. Jeremy and I thought for sure a shot was about to happen!

The ram ended up staying directly on the ridge, the guys were stalking on the opposite side of the timber and both parties went right by each other. Shoot! The ram never saw the guys, and they never saw the ram … a missed opportunity. The wind then changed directions making a stalk on #1 out of the question for the day, so we made the return back to camp. The next morning the wind was perfect, so the boys got in position for a stalk. On the final approach however, the younger ram with #1 busted the guys making their final approach at 80 yards and the rams spooked up and over the mountain … that ended the hunting for the day and we made our return to camp.

We then made the decision to pack everything up and head into a canyon a couple miles further up river where we’d spotted a gorgeous 39×38-inch ram. We made the quick hike up to camp #2 and put the ram to bed way up on the mountain. The next day we decided to leave the ram alone, because he was in a wildly unaccessible location. We decided to hunt farther up the canyon we were camped in for the day. Not far into our hike we found another ram. This one was in a crazy spot that he quickly made much easier for us. It was time for a drink and a stop at a mineral lick down in the bottom of the canyon. After another three-hour stalk, the boys just couldn’t get in a good position and the ram escaped unscathed.

Before coming back to camp, I spotted three mountain caribou bulls high in the valley headed the other direction. One had a very white mane, little did I know he’d be walking right by camp the next morning. Right after finishing breakfast on day 5, Jeremy comes running into camp letting us know some caribou bulls are headed out way … the hunt was on. Adam and Tom grabbed their bows and put on a great stalk. Adam was able to put two perfectly placed arrows into a 380-inch mountain caribou, his first caribou bull and the second of the trip. We took some great photos and video of the bull and spent the rest of the day getting the bull boned out and packed all 106 yards back to camp.