After the success of scoring on another caribou, the team was feeling excited. Now if only the rams would cooperate.... 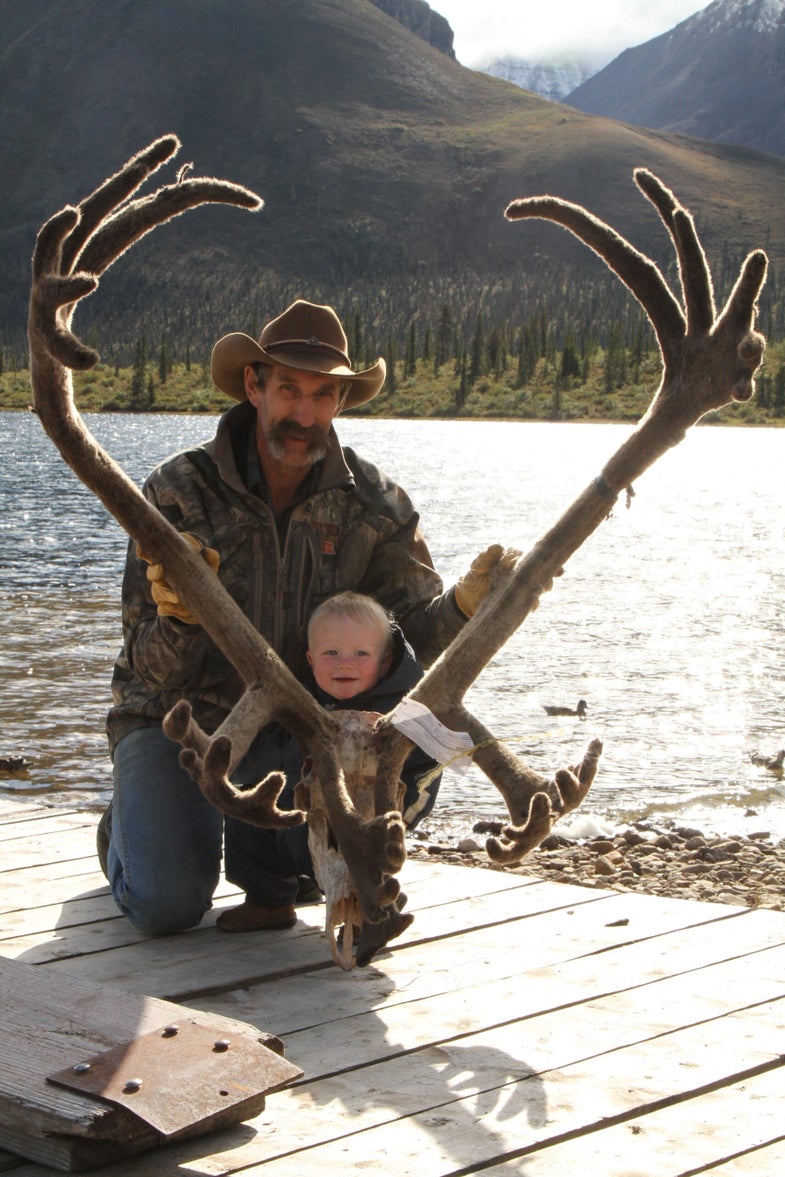 After the success of scoring on another caribou, the team was feeling excited. Now if only the rams would cooperate. We spent most of day six just watching the big ram high on the mountain, two more rams made their way across the hillside to his location, so now we had two more sets of cunning sheep eyes to deal with … but they still weren’t in a stalkable location.

Tom, Adam and Jeremy decided to head across the river to glass some country and see if they could find Broomy again. I had to stay in camp and watch the big ram to make sure he didn’t leave the country. Sure enough, after only 15 minutes of glassing they spotted Broomy in a location where they could make a stalk. Tom and Adam came running into camp to grab their gear and I packed up some clothes for Jeremy, fired up a hot Mountain house and headed over to watch the hunt through the spotter.

Just as the guys were getting going a torrential rainstorm hit us. Jeremy watched as long as we could see through the storm and then made our retreat back to the dry confines of our Hilleberg tents. Tom and Adam were able to make it within 200 yards of the ram before he caught their scent; another stalk that ended prematurely with a shifting wind. The boys didn’t make it back to camp until after midnight. The next day, the big ram still hadn’t moved and the boys decided to make the climb into his spot, even if the wind wasn’t cooperating. When they got within 300 yards from the ram, he caught their wind in the updrafts and took off up and over the mountain with three other rams.

One of the rams we hadn’t yet seen and he was a gorgeous 37-inch really wide stud. Hopefully they’d head over the mountain to a spot we could get another chance at them. At this point we thought we’d spooked every ram in the area, so we arranged a flight out in the super cub that afternoon. We loaded up our Mystery Ranch 6500 packs with the caribou and camp and trudged to the airstrip. Upon arriving at the strip we were able to get a good vantage point on the mountains and were able to spot #1 and the other four rams we had just spooked. Rather than losing a day flying to another area (12-hour flight rule) and not knowing if we’d even find more rams, we sent the Caribou out on the flight and retraced our steps back to camp #1. It was now or never, we had three shooter rams to chase for the next two days … time to get it done!

The next morning, Tom and I glassed #1 who never put himself in a good spot and Jeremy and Adam went after the four rams. Adam got a great opportunity and made it to within 100 yards of the 37-inch wide flaring ram before another younger ram spooked the shooter by catching a glimpse of Adam. They never saw the big 38×39 that day, and our chances were dwindling quickly.

With no sign of #1 the next morning, we luckily spotted the 38×39-inch ram the next day in virtually the same spot he was the day before. It was our last chance and we all loaded up and made the three-mile hike to get in position. The ram proved to be very cunning and had positioned himself in a spot where we couldn’t see him, but he could see us and he busted us from about 500 yards out. That was it, no more rams to chase. We reluctantly hiked back to camp and arranged a super cub flight back from the gravel bar strip. We wanted to get everyone back ASAP so we could hunt the following day around camp for Tom’s caribou.

We made it home in time for dinner, so we could start hunting caribou the next morning at 7 a.m. Upon returning to camp, Harold asked me what I thought my caribou bull gross scored?

“I have no idea even how to score mountain caribou”, I said. Harold told me the bull grossed 416-inches! Wow, I was amazed, on my very first mountain caribou hunt, I’d harvested one of the biggest archery bulls of all time! That evening we glassed 21 Caribou bulls on the very hillside where I had spotted my bull on day one. The next day was going to be fun. We woke the next morning to a heavy rain and thick fog. We made the hike up the mountain but couldn’t see anything, not wanting to risk spooking the bulls we retreated. Tom and Harold made a trip up the mountain later in the evening but nothing came of the hunt, we were done. The next morning the plane from North Wright Air Services showed up and hauled us back to Norman Wells. An amazing trip had come to an end.

For more information about going on the same trip I did, check out http://www.ganariver.com/