We woke up early this morning, eager to get out into the elk. From our camp location we were “hunting”... 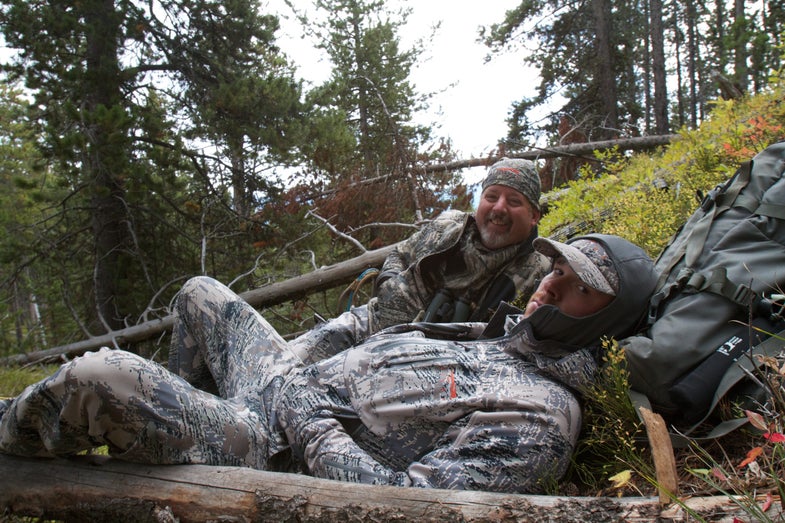 We woke up early this morning, eager to get out into the elk. From our camp location we were “hunting” about 300 yards from the tents. We moved slowly accessing the basin from a game trail I’d hunted frequently over the years. The wind was variable and switching directions all the time so we took our time. Once we reached my “listening spot,” we sat and were immediately treated to some bugles from the basin, this is a great spot and every single time I’d made the trip back there, I’ve been into elk. This trip would be no different.

Once the wind gave us a constant direction, we began our stalk on a big deep sounding bugling bull. We hunted him until about 10, when we finally got busted from a quick wind switch, but the bugles kept coming, over the course of the day we probably heard more than 300 bugles.

At about 11 a.m., we reached a spot I refer to as the “Sand Trap,” a huge early August wallow, that every year by September dries into a huge sand trap that’s always littered with fresh sign. We posted up there for a few hours just enjoying the bugles coming from all around us. I couldn’t sleep from all the noise and I could tell the bulls closest to us had bedded down … perfect! I broke three small sticks and told Les and Chris whoever drew the smallest stick would go after the closest bull.
Les drew the small stick first and was off. A couple minutes after Les headed down the hill, Chris and I both took off in different directions chasing elk. I hadn’t been heading up the hill long before a great sounding bugle got my full attention. I worked my way into position with the wind and started a slow patient stalk. The bull bugled from just above me and I was able to spot him through my rangefinder bedded down at 70 yards.

I glassed the bull and immediately identified him as a shooter. I couldn’t get a good look at anything other than the fourth, fifth, and sixth tines on his left side, but that combination put him well above the 330 class if everything else was there. I was stoked. Now just a little luck and I’d be getting ready for a shot opportunity.

I continued working my way toward the bull and stopped at 37 yards when I felt the wind hit my neck. I positioned my SureLoc slider sight at 37 and waited. I could see the bull catch my wind and quickly move his head in my direction … he scanned for whatever he just smelled, but never picked me up. Soon after, he stood but never gave me a shot, all he had to do was take a couple steps out of the brush and I’d have a look at his vitals. All I could see were his antlers above the alders, but I knew he was a stud in the 340-inch range for sure.

“Take a step, just one and I’d be ready”, I told myself. Instead of stepping out into the opening, the bull traversed up and left, stopping perfectly behind a tree at 42 yards. I repositioned my sight and waited, another step left and I’d have a shot. Once again the bull made the perfect move and headed directly uphill behind the tree! AHHHHH!

I let him go hoping the wind would shift again and he’d re-bed and calm down. I stood there for a couple minutes and heard something to my left. Down the trail came two younger six points (they looked like twins) both in the 280-inch range. I watched them water 20 yards in front of me for a minute before they turned around and took the trail back into the timber. I’m a patient hunter and both of those bulls will be here in the coming years, and they’ll be bigger. You can’t kill a mature bull if you harvest a small one.

I made my way back to the sand trap expecting to be the last one back to the packs, my stalk lasted three hours, and I figured both Les and Chris would be anxiously awaiting my return. Getting back to the packs, I was surprised that no one else was there. I settled into a nap and was woken up by Chris 90 minutes later. He had an opportunity on a big bull, but no shot, we caught up for a few minutes and waited for Les. At about 6 p.m. that evening I started getting worried. Les still hadn’t shown up, his pack sitting there beside me contained his headlamp and survival gear. We gathered wood and pine needles to start a fire at dark if necessary and our minds began to conjure up all the different scenarios of where Les was.

Did he harvest a bull and was busy quartering it? Did he break his leg and was lying somewhere in the woods wounded and out of hearing range? Did he wound a bull and was he now tracking it? Did he get disoriented during his stalk on the bull and now couldn’t find the packs? At 8 p.m., I began to get worried and lit the fire. I’d hoped he would be able to see the glow in the timber but chances were slim. I called Katie back in Bozeman and told her about the situation, gave her the coordinates of our location (also the last known location of Les) and formulated a plan with her and Chris.

We’d sit by the fire until midnight and if Les didn’t show, we head back to camp and hope he was there. If he wasn’t, we’d be calling Search and Rescue first thing in the morning. I hung up the phone and stared into the fire, my friend was somewhere out there, I’d brought him into this rough country that he didn’t know, and now he was missing, without his gear and no gps.

At midnight, Chris and I put out the fire and began the trip back to camp in the dark, with each step I kept hoping Les would be at camp, resting in his tent, awaiting our arrival.

At 1:30 a.m., we reached camp and after a quick look around I knew Les was there because our food bags were sitting next to the stove in camp, not hanging in the tree (we’d hang our food to protect it from the grizzlies!).
“Les?” I nervously called out. “Well there you guys are!” came from his Hilleberg… “Thank God you’re here man, you don’t know how excited I am to see you!”

Of all the possible scenarios that could’ve played out, we were fortunate.s Les had made the stalk toward the bull and the elk was much higher on the ridge than expected, so he spent some time going after him, but in the shifting wind didn’t want to spook the bull off the mountain so he backed out.

Finding the ridge he’d descended and getting back to the packs at the “sand trap” had proven difficult, so he worked his way back and forth across the hillside but couldn’t find the packs. With nightfall quickly approaching (and without his headlamp/gear) Les made the right decision, he climbed up the ridge and headed back to camp. Chris and I would know what to do, and with some luck, I’d be bringing his pack back to camp. This is exactly what I did. Les was hunting with a Mystery Ranch Crew Cab, so I adjusted his NICE Frame to fit me, and loaded my NICE Frame and Longbow into the Crew Cab’s load space and carried both packs back to camp. What could have been a disaster in the wilderness, turned out to be nothing. A late dinner in the rain and some whisky wrapped up one heck of a long and great hunting day!