We’ve been hunting this property here in Eastern Montana for over a decade. We know where the Antelope will be,... 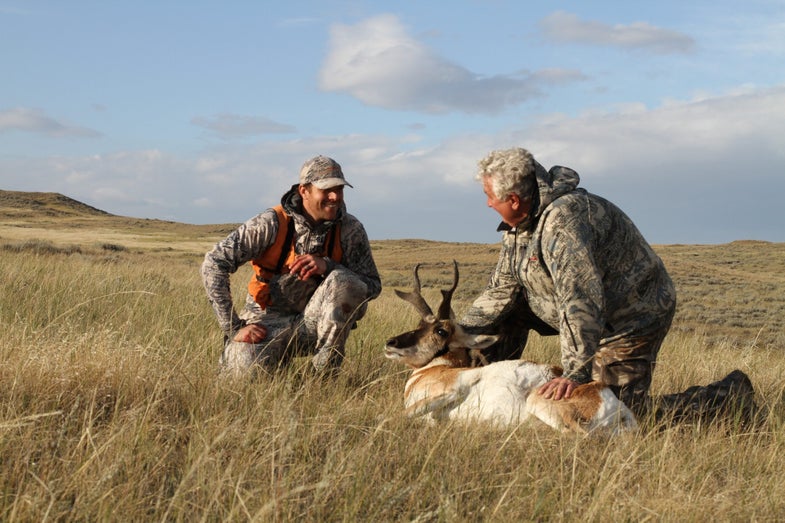 Hunts rarely last more than a couple days and this season would be much the same as last year. My dad (Scott Seacat), John Armstrong, and Kevin Sloan all joined me for this hunt. For as long as I can remember, I’ve been coming out to this country hunting antelope. This season, I chose to apply for the 900 series antelope tag in Montana (bow only, any district), so I’ve been chasing them with my bow. It’s a tough job, considering the rifle season is now open. I haven’t had any luck during the two days we’ve been here, but that’s partly due to the success the rest of our hunting party has had.

Once you start popping primers out here, the antelope learn fast!

Opening morning we woke to some crazy weather. The rain started coming down at about 4 a.m. and didn’t let up until almost 10 a.m. Kevin and I went out into the rain anyway, eager to chase some antelope with our bows. We found a couple good herds, and saw a few really good bucks, but couldn’t close the distance. We hiked back to camp and rallied Dad and John to head out for a lunch-­‐time for the rifle hunt. I told the boys they were each only allowed 1 bullet for their bucks and so the hunt began!

It didn’t take long to get into the antelope and soon John and I were stalking in on a group of eight. We were evaluating a potential shooter from about 220 yards, when another much better buck showed up on the scene. With one perfectly placed shot from John’s 20-year-­old Remington 700 chambered in .30-­06, John’s buck was down!

John and I have been hunting together since I was a kid and it was great to share in another perfect stalk with him.

Time for Kevin to take a buck. Kevin and I had spotted a really good buck while we were out for the morning archery hunt. Our goal was to find him again, but along the way, we stumbled into a much better antelope. We watched the antelope from about 300 yards for a couple minutes and decided he was definitely the buck Kevin should go after. The trouble was, we never got the chance to move. The buck did all the work for us.

Kevin’s buck cut the distance and led his does to within 70 yards of our hiding spot. He came in on a full sprint and put on the breaks when he finally made us out amongst the sage. He waited for too long however and one well-placed shot from Kevin’s .300 and the best buck we’d ever taken off the place was his! What a bruiser! This is just a great public land Montana antelope, a definite trophy. Kevin has made the decision to mount this buck so we took the extra time to completely cape out the buck and salt the hide.

Less than an hour later, it was Dad’s turn. We found a group of 5 bucks and Dad snuck within range and once again, made a perfect one-shot harvest. Three bucks, three bullets! So went opening day … perfect shooting in unbelievable country.

This morning I went out hunting bucks with my bow but couldn’t close the distance in the severely open country with little cover. I regrouped at basecamp with the guys and we decided to go fill some doe tags. My Remington Custom Titanium .280 topped with a Leica 3.5-­‐14x scope did the trick on my doe tag and I harvested a beautiful doe from 300 yards with one shot through the heart. I can already taste the tenderloins! My dad also made good on a well planned stalk and harvested a doe of his own.

Tomorrow morning Kevin and I will go out in search of a herd with a good buck and I’ll make an attempt at harvesting one with a bow, if something goes sour, Kevin will most likely fill his doe tag with the rifle. What a beautiful piece of property, I feel really lucky to hunt here every year.

The best part about this trip is that we always do it with our closest friends and family. We’re really missing our good friend Bruce Simon who’s a regular on this hunt. Bruce we hope you’re feeling better! Any chance I get to hunt with my dad and John I make the most of it. They’re my hunting role models, the guys that gave me the gift of hunting.

Do YOUR part to pass hunting on to someone important to you. The life lessons and time spent afield are priceless.