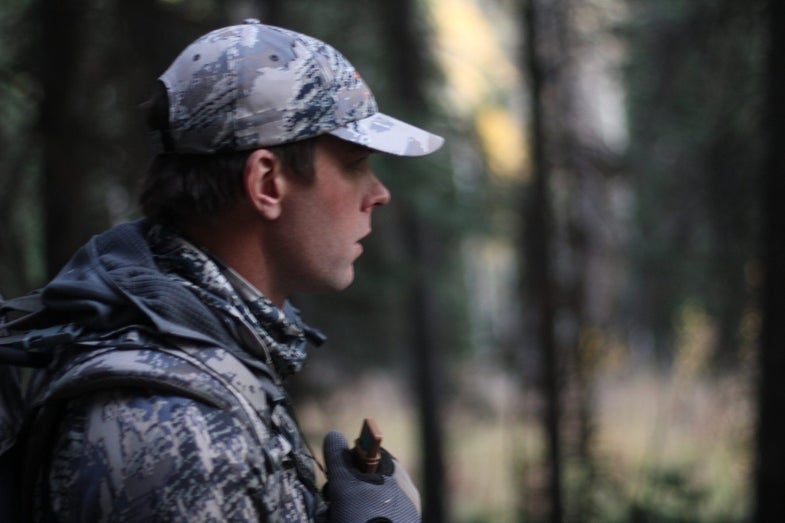 It’s 12:41 a.m., this day began yesterday at 3:30 a.m.
Today was definitely one of the most emotionally intense days I’ve ever spent hunting. The alarm blared early at 3:30 a.m., time to get moving. I didn’t sleep well all night, kind of like waiting for Christmas morning as a little kid I guess — Opening Day always get me pumped.

I checked the alarm about a half-dozen times throughout the night continually worrying about missing the alarm and sleeping through a morning hunt. I was ready to rock when it finally sounded. I’ve been scouting in the unit for the past week and I’d found a bull that I wanted to go
after. Yesterday, Jeff Simpson and I did a practice scouting mission into the country just to get the trailhead, trails and mountain dialed in before the actual hunt began. It made for another long day — only 11 hours tent to tent, but we learned how we’d be hunting the spot and where we’d focus our attention. Our good friend Shane Osguthorpe joined us in camp yesterday afternoon and we readied our gear late into the night.

The bugling started early. With shooting light not until 6:49, we were in position well in advance and watched as the sun rose, accented nicely with a deep bugling bull below us in the timber. Once shooting light came, we worked into position with some tough wind that dictated us having to drop down about 1,000 feet of elevation to get close to the bull. We got in tight, but the wind was so variable that we ended up backing out so as not to spook him. We worked our way back up the 1,000 feet to a good ridge and hiked back down and above the bull finding a nice little shady spot where we settled in for a good mid-morning nap. I love hunting season naps!

After a couple hours of sitting tight, we could tell from the bugles and cow calls coming from below us that the bull and his herd had also settled into their bedding area–it was time to put a stalk on! We gathered our gear and headed their direction. We hadn’t been in the timber for more than 30 yards when I spotted a bedded cow among the aspens 140 yards below us. It was like a painting down there — great grass, golden aspens shedding their leaves over bedded elk!

Perfect, time to sit tight and wait for the elk to make the next move. I watched through my Leicas as cows began to get up and feed. I told Jeff and Shane that I was going to sneak down to try to get a peek at the bull. I had only made it about three yards, before the bull bugled below and started to round up the cows.

I had the wind perfect and of all places the bull could take his cows, he chose the trail I was on. The entire herd was now headed my way! Cows started filtering below me on the trail at 30 yards and I could just start to make out the bull coming toward me through the timber. It was him! I’d watched this bull for the last week — he was a mature 6×6 in the 320-330 range and the biggest bull I’d been able to turn up during my scouting efforts. It was the one I’d spent a lot of time watching through the spotting scope. He was easy to recognize with an abnormal G2 on his left beam and I quickly made it out as he headed my way through the timber. I’m sure there are much larger bulls in the Manti, but I was there with some of my great friends and as the whole scenario began to unfold I decided that I would harvest this bull if given the opportunity.

Check back to see how the story unfolds.