As the bull neared the 30-yard mark on the trail below me, he would have to bear to my right,... 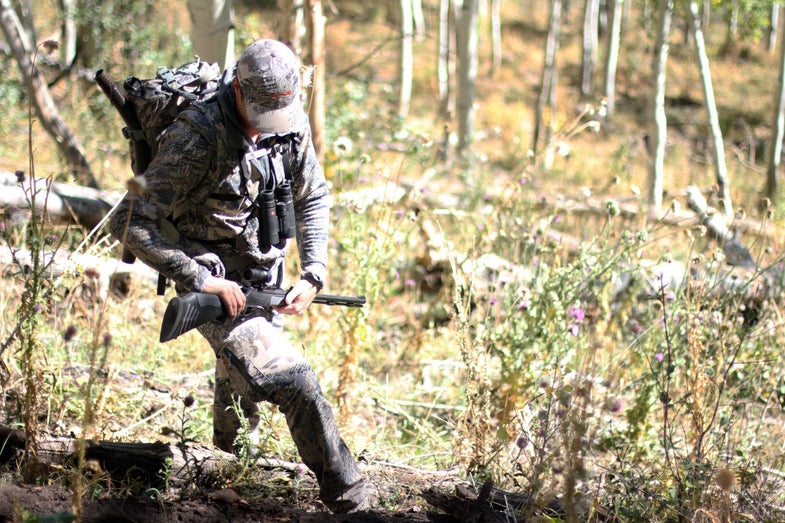 As the bull neared the 30-yard mark on the trail below me, he would have to bear to my right, giving me a perfect broadside shot. Just as he was reaching this point, a cow joined him just above the trail cutting off my shot opportunity. I let them walk by knowing I’d get another window from 40-80 yards as they cleared the timber to my right. Just then, I caught movement to my left.

A quick glance told me I had a 5×5 satellite bull about to run me over at five yards, the bull must have caught my movement and immediately put on the breaks circling down below me on the trail the herd bull just used. I immediately shifted focus back to the opening to my right and stood, getting a rest on an aspen as the herd bull began to near the window.

The dozen cows in his harem took a more direct route to the ridge, they were at 40 yards, but the bull went a little farther downhill and stopped in a window at 70, quartering away from my position. I held the sight on my muzzleloader behind his shoulder and slowly squeezed the trigger. With the muzzle blast and ensuing smoke cloud, I couldn’t be sure exactly where I had hit the bull and quickly loaded another round. I walked back up to Jeff/Shane and we gave the bull a couple minutes before heading out to look for hair and blood where he had stood. I was working my way to that location and Jeff and Shane headed up to the ridge to get a better vantage point — something in hindsight I should have done as well.

They spotted the bull standing on the ridge, no cows in sight. The bull then spooked after seeing the guys and headed directly down into the basin to our right. I scrambled up through the deadfall, rolled an ankle and took a fall before I could get to a good spot to shoot from. The bull had stopped on a bench and I took another shot. I don’t know if the second shot hit him or not–at this point I’m assuming I missed because the bull didn’t react at all, other than to run further down into the basin.

All of our hunting instincts told us to let him walk. He’d most likely head down the hill and bed, then we could sneak down to him and hopefully find him expired or follow up with another shot. We waited 40 LONG minutes before following his trail. What we found surprised everyone, very little blood and the most difficult tracking job I’d ever been on. Up until the last two hunts (the Montana wilderness archery hunt and this one), I’ve never been involved in losing a big game animal–never. Today’s hunt would be much like the Wilderness trip, except this time, I was the shooter.

We painstakingly followed the bulls tracks, finding blood every 75 yards or so. I was aghast. What had happened? Even now, it’s 1:08 a.m., and I’m replaying the entire scenario over and over.