I’m officially two morning and two evening sits into my treestand hunting career. Talk about a change from the mountain... 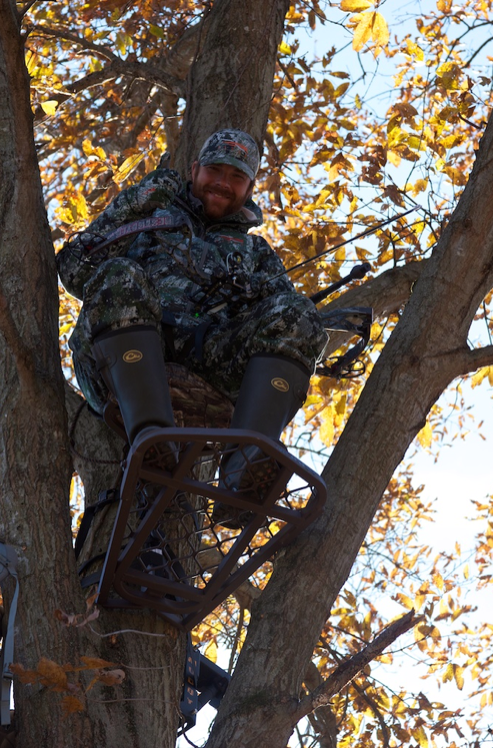 I’m officially two morning and two evening sits into my treestand hunting career. Talk about a change from the mountain hunting I’m used too. It’s a wild difference in hunting style. We’ve been alternating our setups in hardwood timber patches and sitting on field edges over standing soy beans. I’ve had a buck underneath me on EVERY sit and the first evening the buck was a great one. Without stand hunting experience, I have literally NO expectations, but I’m hunting with my good friend Jeff Simpson who’s a hardcore Midwest whitetail hunter, and he doesn’t want me to go home empty handed!

Jeff’s really taking one for the team on this hunt. He’s here strictly to help me out and film the entire adventure. That’s saying something about his friendship… he’s been chasing a buck in Kansas for the better part of two straight months — a 185-inch stud.

Instead of being there, he’s been scouting, hanging stands, hanging trail cameras and preparing for my hunt. If you’re a whitetail hunter reading this and you live in the Midwest, you’ll no doubt agree that this November is one of the warmest in recent memory and WARM TEMPS AREN’T the recipe you want for hunting!

These bigger bucks are almost strictly nocturnal. We’re catching some really good bucks on our trail cameras, but it’s always between at midnight and 2 a.m. Two bucks in particular would score in that 160-150 range, which would really make for a spectacular first whitetail. In all my hunting experience, I’ve never harvested a whitetail buck. I grew up hunting muleys and elk. We’d hunt the high country in the mornings and then switch gears hunting a dense river bottom for whitetails in the evenings. I never had a buck tag!

I’d almost always fill my general deer license in Montana with a 4×4 or better mule deer on the first couple days of hunting season. I did however… have lots of whitetail doe tags and we hunted them hard. The area we were able to hunt wasn’t in a weapons restriction area, but we only ever used shotguns just to be safe. Busting brush chasing does with buck shot is quite a bit different than hunting with your bow out of a treestand!

Everything is different from mountain hunting. I’m used to staying warm by moving. Sitting for hours on end suspended up in a tree was a serious wakeup call. I’ve had to wear almost ALL of my Sitka layers to keep my comfort level up … meanwhile Jeff only has a couple layers on and he keeps reminding me how much of a wuss I am!

We’ve been very fortunate to have the opportunity to hunt on a farm owned by Larry Kendall. Larry also owns and operates Muddy Outdoors. Muddy has a complete line of treestands, climbing sticks, camera arms, and safety harnesses geared towards the hardcore and discerning whitetail hunter. I’m not just a hunter, I spend a bunch of days each year rock climbing, ice climbing, and mountaineering. I’m used to harnesses and rope work and I’m thankful for the Muddy safety systems I’m wearing during each trip up the tree.

I’ll be honest, I don’t feel extremely comfortable up in the trees, but knowing my harness and linemen rope system is secure, gives me some more confidence. I’ve also been taking safety to the next level and hanging another rope from the tree with a prussik knot for protected defending. It might be more than what most guys are doing, but I really don’t want to get hurt falling out of a treestand.

Our best encounter thus far came on the first evening, my second-ever treestand sit. About ten minutes before last light, I spotted a buck cruising through the hardwoods about 60 yards from our stand and immediately alerted Jeff. Jeff grunted at the buck a couple times with no response. I figured he was gone, but Jeff decided to give him a “snort-wheeze” and it turned him immediately.

“Here he comes, get your bow!” Jeff said. I was ready to rock, but the buck (the 150″ we’d seen on the trail camera) locked up at 28 yards and a couple limbs and branches impeded my shot opportunity. He slipped away, but I was hooked. Just like that after long hours spent trying to stay awake in the stand, a great midwestern whitetail was RIGHT in front of me. Awesome!

As I type this, we’re headed north to Iowa to shower and wash clothes at Jeff’s house. It’ll be good to have clean clothes and be putting less scent out into the winds. We’re also going to Albia to check in with Larry and the folks at Muddy Outdoors. I’m looking forward to a tour of their facility and check out some of the monster Iowa whitetails in their office.