I had the opportunity to hunt with my good friend David Dillon this past Friday through Sunday. David lives in... 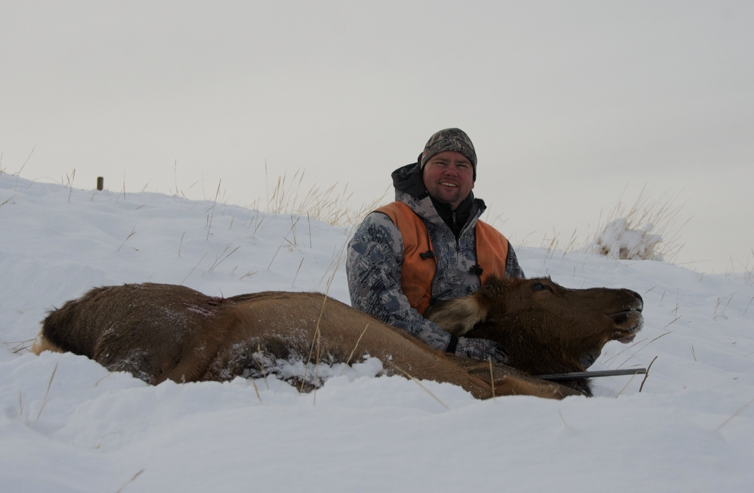 I had the opportunity to hunt with my good friend David Dillon this past Friday through Sunday. David lives in Delaware, works for W.L. Gore and Associates, and has been developing a passion for elk hunting the past few years. You might remember David from the New Mexico Rifle Elk Hunt during last season’s “Live Hunt,” and once again this season, we’d made plans to hunt elk together.

David was unsuccessful in Montana’s Non-Resident drawing for a general elk license, so we weren’t going to get a chance to hunt bulls together again in 2010, but this didn’t deter David in the least! Shortly after getting the news about the drawing, David decided he would purchase a cow tag when they came available for sale later in the year.

A plan was hatched, areas were discussed, and he booked his tickets. We’d only have 4 days of hunting to get it done, late in the Montana Elk Season… more than likely we’d be dealing with some cold weather and deep snows.

David and I also share a great friend named Chris Awe who’d signed up to participate from the beginning. Chris is as solid as they come in every aspect of friendship, and he’s also an amazing mountain athlete/hunter who I’ve spent hundreds of days afield with. The team was shaping up nicely. Chris works as one of the Regional Sales Managers for Sitka Gear and the opportunity for all of us to test some new products targeted for release in 2012 gave us all a little extra motivation to get out into the “FRIGID” Montana early winter after the elk.

The temperature gauge in the truck read -13 degrees as we made our way through the Paradise Valley on the snowpacked highway. This was the third straight day we’d been making this drive, both morning and evening, back and forth from my home in Bozeman to where we’d been hunting.

The hunt had been successful so far, but there was still an elk tag in David’s pack, today would be our last attempt to remedy that situation before meetings on Monday sidelined both of us. During the previous days, we’d hunted national forest, state lands and block management … we covered ground, saw elk, but couldn’t put it all together with a cow on the ground.
That evening, amidst the dim lighting of the Old Saloon in Emigrant, we sipped on cheap beers and ironed out the day’s plan. We’d been fortunate to secure permission to hunt a piece of private ground that was currently holding many more elk than the landowner wanted to feed all winter long… it was a good trade, more alfalfa for you and your horses, and more elk meat for David’s freezer… if we could get one down.

I was dressed in so many layers when we left the truck in the dark, I felt more like I was climbing Denali than hunting elk in Montana. David was also dressed to the nines in the Sitka layering system and we put the test on some “top secret” new garmets that were extremely impressive in the cold weather conditions.

Shooting light came at 7:09 a.m., and with it, we spotted the elk herd. There were roughly 200 elk in front of us. Amidst the cows, calfs, spikes, and raghorns, was a gorgeous 350-class six-point bull. The elk were still a ways off from our location and we had to be patient until we could get a good opportunity.

As is commonplace with elk hunting, the elk will more than likely do something totally unexpected and quick decisions can quickly lead to filled tags … our hunt was no different.

The elk were more than 600 yards away from us and suddenly decided they wanted to get to the country on the opposite side of where we were hiding… perfect. We immediately had the entire herd on a string. It was really hard to focus on any elk other than the big bull as they came by us at 145 yards on the run… wow!

Rather than take a shot at a running cow, and with plenty of deep snow around us to slow down the elk, we chose to wait for one of them to stop. When they did stop at 200 yards, David made a great shot on a beautiful cow! After a short tracking job we found his 2010 Montana elk!