It’s midnight, and I can’t sleep. The adrenaline still hasn’t worn off, and I’ve been up for almost three days... 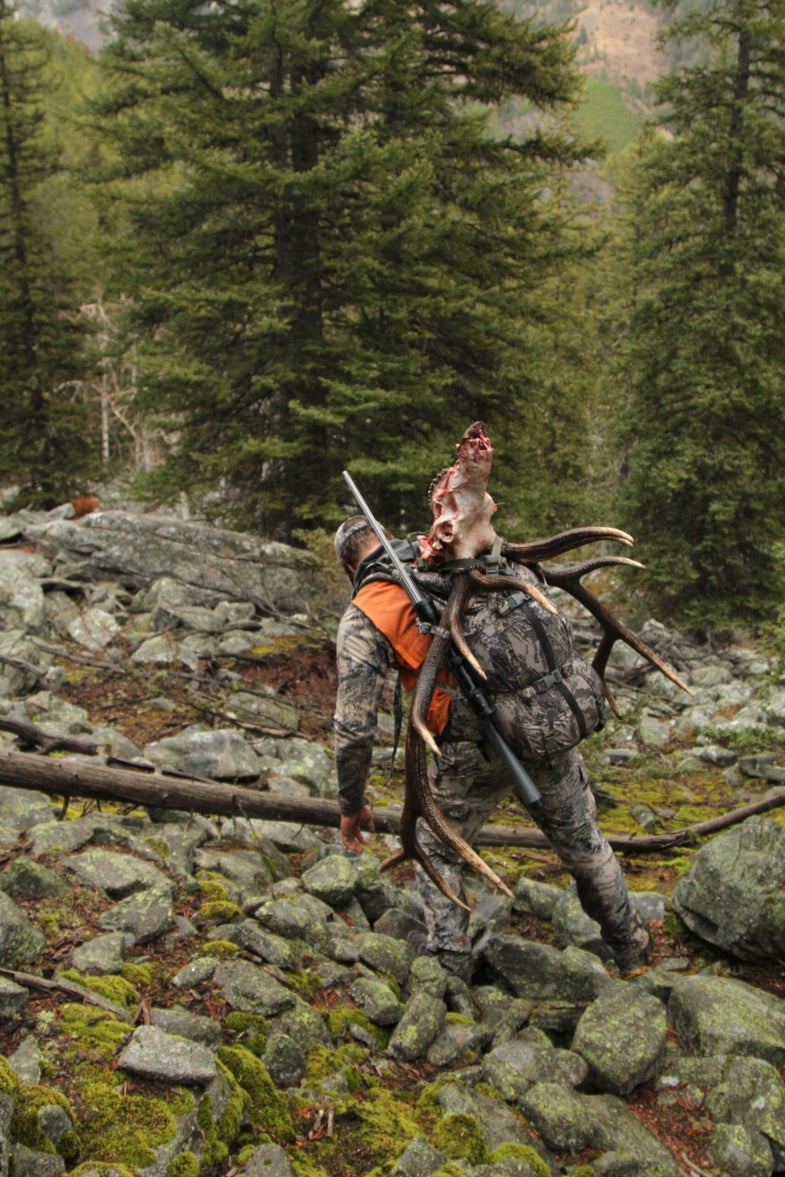 It’s midnight, and I can’t sleep. The adrenaline still hasn’t worn off, and I’ve been up for almost three days straight. In my garage, I’ve got two huge Yeti coolers filled with boned-out elk meat right next to a beautiful 6×6 elk rack. Who needs sleep?!

After a much-needed five-day break from hunting, I returned to Bozeman motivated and rested, hoping to find a good bull. During my first morning back in the hills, I pushed myself. I covered 5 miles into an area with 4,500 feet of elevation gain and a return trip back to the truck in six hours–unfortunately having seen only two cow elk.

My brother-in-law, Andrew Crow, had harvested a bull in the same general area on opening morning, and with his intel, I knew there had been other bulls there. It had been almost a week since his hunt. I didn’t cut a single bull track in the snow all morning. The elk had definitely moved on. I switched game plans and hiked out.

That evening, I was sitting at a great glassing location watching some of my favorite country in a different area. At last light, I found a good-looking 6 point with nine cows in a pretty remote spot. Now what to do? The elk could be anywhere at first light after feeding all night. Instead of going in blind, I decided to spend the next morning at the same glassing location, hoping to relocate the herd and put them to bed before the evening hunt.

A couple minutes after first light, I found them. They had fed farther up the mountain overnight. I watched them feed through a few avalanche gullies and into a small patch of dark timber at 9:30 a.m. I watched the trees for an hour with no sign of the elk. “They had to have bedded,” I thought to myself. Their bedding spot had no decent feed to the north. They would have to feed out to the south. I could definitely get to good vantage point above where they’d most likely feed. Now I just had to get the wind right.

I figured the herd would begin feeding around five o’clock, based on when I spotted them the night before. At noon, I started toward the elk. I wanted to give myself plenty of time to go slow. I spent the next four hours stalking to within 150 yards of where I thought the elk would show up. I almost went through two wind-checker bottles during the hike up the mountain–the wind was wild. I was forced to move farther into the canyon before I was able to get the wind correct. It took a long time, but I was able to get to where I wanted to be silently and undetected.

Right where I’d hoped to find the elk… I DID. A storm was coming in, and the elk were already up and feeding. They weren’t below me, as I’d expected, but directly across from me. The first elk I saw was the herd bull.

He really stuck out among the dark timber with his light coat. I focused on him long enough to remember he had nine cows… “Better find them first before you get busted.,” I remembered thinking to myself before I glassed around for the cows. I found them just above me, about 100 yards out. They were on the opposite side of the gully feeding toward me in a perfect wind.

I lowered down into the deadfall I was standing in slowly. I rested my rifle over a downed tree and leaned into my backpack nestled behind the log. I watched as the cows fed out one by one into the avalanche chute. My view into the gully was obstructed by only one tiny group of pine trees 10 yards in front of me, but I could clearly see 100 yards across, 100 yards uphill, and 150 yards downhill.

Of course the bull somehow chose to enter the chute so that he was protected by the trees in front of me, no chance of a shot. I contemplated moving and then saw the cows turn their heads as the bull began to head their way. I could hear him, and see him, but a shot wouldn’t work through the tree limbs. My only choice was to be patient. He would go to them.

The wind was absolutely perfect, and I knew that if it suddenly switched and the cows spooked, I could easily stand up and get a clear opportunity. The wind kept hitting me in the face and I held tight. I’ve never felt more confident in a hunting situation. I knew I would harvest this bull. I waited for 15 minutes while he fed there. It was an amazing amount of time to spend with such a great wild animal. Finally I slipped up the hill about 3 yards. With just that little movement, I was could able to get a clear window past the limbs. The bull soon gave me a perfect (broadside-feeding-away) angle. I ranged him–97 yards. I silently pushed forward the safety and settled the crosshairs.

Cows continued to linger on the ridgeline as I made my last steps to the fallen bull, some of them continuing to mew in my direction from just inside the timber. The elk had been completely surprised by my gunshots and still hadn’t left the area. I set to work immediately on quartering and deboning the bull. Two hours later, I was on my way to the truck with the first load. On the way home, I made a couple of phone calls. Both calls were answered by excited voices. I’d be coming back in the next day with Katie and Andrew as support to get the rest!

We returned early the next morning to retrieve the elk. Before leaving the spot with the first load the night before, I’d hauled the rest of the meat away from the carcass and into some downed and leaning timber. I found a good spot to cool the meat overnight (off the ground), broke pine boughs to cover the meat from any sun and birds, and wedged the antlers up in the limbs of a tall pine tree nearby. Everything was as I left it when we returned.

We boned-out the remaining meat and loaded our packs to the hilt, carrying the rest of the elk out in one long trip, three heavy loads between us.

Check back tomorrow for the video and Thursday for all of the photos!