On the highest peaks of Alaska, concern is growing about the future of Dall sheep hunting and just how tags... 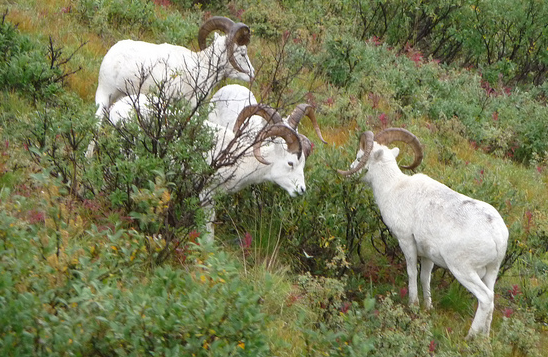 On the highest peaks of Alaska, concern is growing about the future of Dall sheep hunting and just how tags should be distributed. Here’s Part 2 of Tyler Freel’s Special Report

Finding a solution to the current situation is as hard as it is complicated, but the general consensus I have gotten from talking to troopers, Fish and Game officers, resident hunters and some guides is pretty clear. For the most part, residents believe that the number of guides should be more regulated. This includes utilizing exclusive-use concessions and requiring all outfitters to be permanent Alaska residents or pay a much higher license fee. Having their own managed areas to hunt and calculated harvest quotas would drastically improve the trophy quality and reduce guide-to-guide conflicts, allowing guides to manage the herds they hunt more responsibly–without the worry that another guide will move in and kill all the legal rams.

It just seems like common sense that guides should be required to be residents, or at least be held accountable for managing their areas. If you want to be a guide, go for it, but you should have to live here or pay a much higher guide’s license fee to show commitment to maintaining the areas you hunt. This would not only seem fair to resident hunters and resident guides, but such a law would also reduce some of the illegal harvest by inexperienced guides while driving more revenue into the state’s economy. Guides are much more likely to have an interest in the long-term health and trophy quality of the animal populations they hunt if they live here and/or are committed to being in it for the long haul. This not only goes for sheep, but moose, bears and virtually every other hunted species.

Finally, one option that has been brought up that is popular among resident hunters and would benefit guides is to make all non-resident sheep licenses draw-only. Alaska and Montana are the only states where non-residents (and residents) can just buy a sheep tag, and Montana’s over-the-counter hunt is extremely restricted by quota and location. Reducing the number of available non-resident tags by 50% and doubling the price would go a long way toward improving trophy quality in the long run. This sounds harsh, but compared to all other states, Alaska’s current license availability for non-residents is extremely liberal.

It currently costs non-residents about $500 for their license/tag fees for Dall sheep. By contrast, in Colorado, if a hunter is lucky enough to draw a Colorado bighorn sheep tag, he will be paying upwards of $1,800! Giving resident hunters priority is standard procedure for nearly every state except Alaska, so would it be so bad? According to Steve Hallenbeck, a licensed Alaska guide and former Idaho resident, “In Idaho, the maximum amount of non-resident sheep tags given is ten percent of the total number of tags awarded.” In Alaska, non-residents are killing nearly 40% of the sheep!

With less pressure, more rams will be allowed to reach their full potential. It may take a little longer for a hunter to draw a tag, and it would drive the cost of the hunts still higher. But with all of the costs already associated with a guided sheep hunt, it makes sense to want to come out with a really nice ram, not a barely legal one.

No solution can make everybody happy, but pretty much all of the guides and former guides I talked to were in favor of these changes. Even though it’s vast, Alaska has a finite amount of resources, and many agree that there simply isn’t enough country to sustain the increasing number of people who want to hunt sheep. In order to ensure that future generations have the same opportunities to hunt as we do, we must properly take care of them now.

These ideas are not the be-all-and-end-all, but along with predator management (which is a completely different problem), it’s a start. I think that responsible guides are an important part of the Alaskan hunting culture, but I also think a lot of the current ones need to go. Would you want to invest $12,000 to $14,000 in a hunt and end up getting stuck with an inexperienced or illegal guide that is more worried about your money than your experience in the field and getting you the trophy of a lifetime?

My uncle spent a short time guiding for an outfitter on Kodiak Island who told him that if they got only one or two bears for every five or six hunters, that would be plenty. Do you want to hire a guide with that attitude? How would you feel about having a 5% to 10% chance of being one of the numerous hunters whose guides tell them to shoot an illegal sheep?

This is how I feel as an Alaska resident, and a serious sheep hunter. I care deeply about Alaska’s wildlife and I want to preserve the hunting privileges I have now and improve the quality of the sheep on the mountain. But I want to know your thoughts as well. Good or bad, if you have hunted Alaska or want to hunt Alaska, please leave your comments about your experiences or your thoughts and solutions in the section below.