After an unexpected phone call from one of my hunting buddies on Tuesday night, my wife found me stuffing gear... 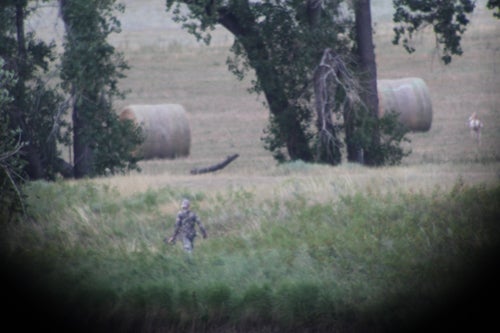 After an unexpected phone call from one of my hunting buddies on Tuesday night, my wife found me stuffing gear into my pack like a mad man. I just had been invited on an antelope hunt in eastern Colorado that was starting the next day. I had not planned on hunting antelope this season and was just going to spend the weekend getting gear together for my upcoming mule deer hunt. Well, those plans went out the window when the idea of sticking a speed goat came into the equation.

Antelope hunting with stick and string is no easy task as I was about to find out.

Stalk 1
The hunt started on Thursday morning as we found ourselves neck deep in a 400-yard low crawl through alfalfa fields. Everything was working out great and we had closed the distance to just inside 80 yards. That warm and fuzzy feeling started to rush over me and I was sure that the buck we were closing in on was about to take a dirt nap. Well, the hunting gods had other plans, and somewhere between 82 yards and 64 yards my release got debris jammed inside and locked up tighter than a drum! The first thing that came to mind was; no problem, I will hook it on my bootlace and MAKE IT FIRE: yeah right. I pulled so hard on my bootlace that I ripped two eyelets out of the boot. So we backed out and went to grab my backup release. Antelope 1, Hunters 0.

Stalk 2
This stalk started off a bit easier as we had a creek bed that weaved through a field that our antelope were bedded in. We picked the route apart through the Swarovski 80 MM and decided if we came out of the creek bed at the right spot, we would be within 35 yards of the 3-bedded bucks.

So off we went, duck walking like a couple of fools in hopes of a close encounter. After we had gone about 200 yards into the creek bed, we hit our first obstacle: a road, with no culvert underneath to pass under – DANG. We were going to be silhouetted for sure crossing the road, but patience paid off and we inched across without the antelope detecting us.

Smooth sailing from there and we could almost walk upright for the last 100 yards. When we got to the large patch of dandylions that we marked from the road, we knew that we were within shooting range of the group. We low crawled up through the weeds and knocked our arrows. I then did a push up type motion to look over the weeds and confirm the distance on the bucks. Well what do you know? When I peaked my head over the bushes I was greeted by the largest buck of the group, about 12 yards from me. Needless to say, the group didn’t hang out long. Antelope 2, Hunters 0.

This was a quick hitter and only required about 2 hundred yards of low crawling. We had some tractor parts to hide behind, so we could actually make good time getting to the buck. When we arrived at the equipment, the buck was still 117 yards away, but as luck would have it, his head was facing the other way. So we inched forward hoping to get within 60 yards. Shortly after the inching commenced, the buck stood up and started walking straight towards us. Awesome, this one is going to commit suicide for me and offer a 20 yard shot; except I need to draw, anchor and shoot without the buck seeing me. Let’s just say that did not work out like I had hoped and my partner finally got the buck to stop at 57 yards. I took a broadside shot, but the buck ducked and my arrow went over his back. Antelope 3, Hunters 0.

Stalk 4
As we drove out of camp on Friday morning, we noticed a group of seven bucks within 80 yards of the road, but like any place in eastern Colorado, we had no real place to stop without them seeing us.

So we got the idea together for me to low crawl about 250 yards beside the road (the closest place I could get out of the truck), and then inch across the road without getting run over like a possum. Luck was on my side here and when I got across from the antelope, I had a culvert that I could low crawl through without silhouetting myself.

So after the wonderful crawl through the culvert, I only had 40 yards to go. I closed that distance in less than a minute and found myself at the fence line with good cover to get my bow drawn. I clicked on the biggest animal and got a range of 47 yards, drew my bow, raised up to my knees and the antelope pulled an audible and started shifting around like crazy. Now I had to figure out which buck was the largest.

After about two seconds, I just put my pin on the closest buck and squeezed off my shot. Oh no, the bucked quartered to me a little more after the arrow was release and it looked like I caught guts and one lung. He ran off about 40 yards and hunched up. So I loaded up another arrow, clicked on him with the range finder and dropped him to the ground for good with the second shot. WOW, what a hunt!

He wasn’t my biggest antelope, but I was damn happy to have him, and spot and stalk hunting to boot.