Anything can happen when you head into the backcountry for two weeks on an elk hunt. This year’s hunt was... 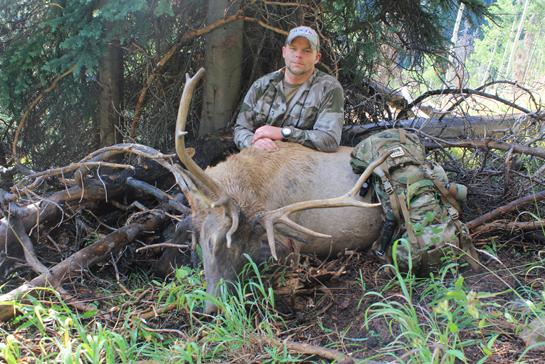 Anything can happen when you head into the backcountry for two weeks on an elk hunt. This year’s hunt was no different and all the physical and mental challenges that I’ve come to expect were in full force.

We started the hunt off with a 3.5-mile hike and the rain seemed to start the moment the truck door opened at the trailhead. It lasted for the next three days. The good thing about bad weather is that it seems to always push elk into a rut frenzy. The storm front was just what we needed to kick the bulls into gear.

On the third evening of our hunt my partner and I set up on a meadow that was surrounded by dark timber. It was early in the evening, but we hoped that the storm would get a bull to respond a little earlier than normal. At 6 p.m. we did a short sequence of cow calls and bugles. Then the mountain came alive. There were 3 bulls hanging out 400 to 600 yards above us that bugled back immediately. I was set up about 80 yards above my partner Fred when the bulls sounded off, and he ran up to me to get a quick plan of attack together.

At that distance, we figured the chances of calling the bulls in were slim to none, so moving closer was the only option. We decided that Fred would keep calling every few minutes as I pushed forward. This would allow me to keep track of each bull as I slipped through the dog hair timber that filled the mountain above us. I moved through the timber as fast as possible and was able to close the distance to 100 yards.

See the photos of my elk hunt here.

I was 100 yards from what sounded like 2 bulls and several cows and Fred was 400 yards behind me. The bulls were giving an immediate response to his calls. It was a perfect set up. All I needed to do was slowly work my way up another 50 yards and give some cow calls.

Well, all hell broke loose shortly after that and my plan fell apart. As I worked my way through the timber a bull on the opposite side of the valley started to bugle every few seconds and this guy was definitely the king of the mountain.

He managed to call every elk that was on my side of the valley over to his position, and in a few short minutes, I could see several elk crossing the stream at the bottom of the drainage working toward the big boy’s position. I waited a few minutes for all the stragglers to get across the creek and then got a game plan together.

I could see the bull through the patches of timber and could count at least 50 elk surrounding him. This wasn’t going to be a slam dunk stalk by any means, but I had decent terrain to work with and the falling rain plus the creek bubbling below me helped cover up any noise I made.

I made quick work getting down my side of the valley and got to the creek in a few short minutes, but now it was time for the hard part.

The elk were on a bench that was in the middle of 45-degree hillside that had a mixture of grass, aspens and conifers. This was a perfect spot for a rutting herd of elk. The only problem was that I would get a few steps up the wet grass and then slide back twice as far. Luckily the grass was chest level and concealed most of my movement. Every few seconds I popped my head above the grass and tried to get a fix on all of the elk with my binoculars.

So with 35 minutes of shooting light, I closed the distance to the herd down to 65 yards. I could see at least 30 cows and 3 bulls chasing each other around the hillside and only a few seconds would go by without one of the bulls ripping off an angry bugle. I figured this was as good of time as any to sound off with my own bugle to entice one of the bulls to come charging in, so I ripped off the loudest and nastiest bugle I muster and immediately went to full draw.

The bugle worked like a charm and the entire herd worked it’s way to me, but I was a victim of my own plan. Each bull had at least two cows immediately behind him. I could count a total of 38 elk in this group and they were all within 40 yards, but the chances of my arrow blowing through one of the bulls was very likely and I did not want to wound a cow.

I let the bow down and lowered myself back into the grass. The largest of the bulls in the group was irate after my bugle and started to round up the cows and push them into the timber. My heart started to sink, but as luck would have it, there were two bulls and three cows still on the hillside and they were all in stalk-able positions.

I started to low crawl through the grass toward the 5×5 that was just above me.

The last time I had ranged the bull he was at 55 yards and I wanted to get within 40 before I considered taking a shot. I crept in for the last 15 yards. When I popped my head above the grass the bull was perfectly broadside and feeding. It was now or never. I clicked the range finder on him 2 more times to confirm … 38 yards. I came to full draw, settled my 40-yard pin on the bottom of his heart and released the arrow.

CRACK! My arrow blew through the middle of his heart and buried itself in his opposite shoulder. I lost sight of the bull after the arrow hit him, but I could hear what sounded like a barrel rolling down the mountain. I jumped up on a log and could see the bull’s hooves flipping through the air. He was actually rolling down the steep slope and expired shortly.

My nerves at this point were shot and my legs were shaking. I was jacked through the roof and couldn’t wait to tell my partner what had happened.

I had about a mile and a half hike back to base camp, and since I had left Fred somewhere on the other side of the mountain, I could only hope he was back at camp waiting for me.

I had a decision to make; do I start cutting up the elk by myself and leave my partner wondering where I was, or do I leave the bull where he died and go find my partner? With the temperatures dropping into the 30’s at night, this was an easy decision. I would leave the bull where he died and ribbon my way down to the trail, head back to camp and hopefully find Fred. My plan worked out like I’d hoped and Fred was eagerly waiting. We decided to get a few hours sleep and head back to the bull at daybreak. So the next morning we were on the trail bright and early, but the adventure had just begun!

Like I said in the beginning, anything can happen on a backpack hunt and after hiking a few hundred yards up the trail a couple cows ran in front of us. I quickly gave Fred the camera and started to creep up on my knees to where they crossed. I could see them moving away from us, so I did a few lost calf/cow sounds and they ran back to me. I figured they were about 18-20 yards from me, so I rested my pin just on the inside of the shoulder and released the arrow. The arrow passed straight through the cows’ heart and exited just in front of the rear quarter. She died almost instantly and only a few yards from the trail. I looked back at Fred and said, “Wow, it’s been on hell of a morning”!

So my list B cow tag and over-the-counter bull tag were filled in less than 2 total hours of hunting. I couldn’t have been happier and was thrilled that Fred was there to share it with me. I can’t say that Fred was feeling the same way since we had about 5 miles of heavy packing to get to the trailhead, but that’s what friends are for.