With summer just around the corner, many of us will soon be taking to the mountains and trails in bear... 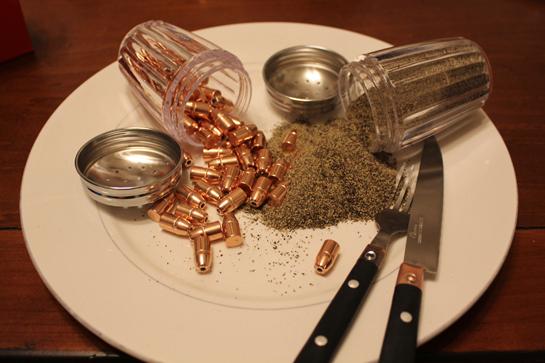 With summer just around the corner, many of us will soon be taking to the mountains and trails in bear country. Those of us who fish, hunt, and hike in the grizzly and black bears’ stomping grounds need to give them respect, but also be prepared for a potential violent encounter. So what is the best option for stopping a bear that’s hellbent on tearing you to pieces?

It depends on who you ask, but the two most common answers are guns (where permissible to carry them) and pepper-based bear repellent spray. (For obvious reasons, we are going to eliminate bear bells from the equation right off the bat.) Let’s take a look at some of the advantages and disadvantages of both.

Bear Spray
Whether you love or hate the idea of trusting Tabasco sauce on steroids to stop a charging bear, bear spray is proven to work. It gives a good coverage area and I have never heard of a bear that refused to break off when hit in the face with spray. Bear spray is easy to use and pretty safe when other people are in the area. With a little practice, and a bit of familiarization, nearly anyone can effectively carry and use bear spray. One of the downfalls however, is that bear spray’s effectiveness is largely dependent on the weather, especially wind conditions.

In strong winds, the range of the spray diminishes, as it disperses much more quickly. Another problem is that if you have to spray into the wind, you’re liable to get more of a dose than the bear. My buddy’s brother was practicing with a can of spray, and happened to do just that. He got a face full of pepper spray, and luckily a bear wasn’t charging because it put him out of commission. I haven’t had a lot of experience with using bear spray in the rain, but precipitation is also known to diminish its effectiveness.

Bullets
A common saying in Alaska: “The bears you really have to watch out for are the ones that smell spicy and jingle when they walk.” Many people here in Alaska prefer to pack a little more punch when they venture into the woods. Guns have been used as effective bear protection since the days of mountain men. A modern rifle, shotgun, or handgun–in well-trained hands–is more effective than spray: A good shot on a charging bear can kill it outright.

However, in the wrong hands, guns can be ineffective at best, and more dangerous than the bear at the worst. There are a handful of stories about hunters accidentally shooting their buddy who was being attacked by a bear.

Whether you choose bear spray or a firearm for protection is up to you, and there is no clear answer as to which one is better. I choose to use a firearm (find a post about my bear backup gun choice here). I am experienced and practice often, so I feel comfortable in bear country with a gun. Many people are very safe and capable of effectively using a firearm to defend themselves, but just as many people are much better off using spray. Neither guns nor bear spray are perfect, and both should be treated as last-ditch options. The best defense is being conscious of your surroundings and understanding bear behavior.