ThermaCELL: The Best Invention of the 21st Century 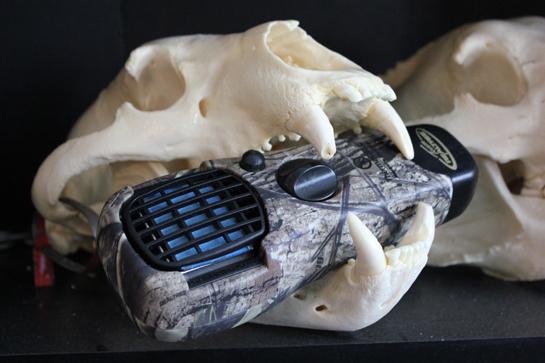 Baiting black bears here in interior Alaska poses a few challenges, including river navigation, thick vegetation, and rampaging grizzly bears. But in my opinion, the most formidable challenge to overcome this time of year is the mosquito population. Alaska is infamous for its “state bird,” the mosquito, and I have never seen them so thick as I have when sitting on a black bear bait.

Especially during the wet, early summer months, gangs of bloodthirsty mosquitoes numbering in the thousands wait in the woods, ready to swarm any breathing creature that sets foot in their domain.

Many nights I’ve come home from the bear stand resembling some sort of sci-fi Star Trek creature thanks to of hundreds of bites. I would have to wear a full-upper-body bug net, two pairs of pants (they can bite through one), duct tape my sleeves to my gloves and my pant legs to my boots, and wear enough deet to melt the paint off a Corvette. Even with all these measures, the roar of their wings buzzing around my head made it impossible to hear Bigfoot breaking off tree trunks, let alone a bear coming into the bait. That was until the ThermaCELL was invented.

When the ThermaCELLs started showing up a few years ago, I was very skeptical. I thought there was no way on Earth that these things could thwart the biblical plague of blood suckers on a black bear bait. However, I kept hearing how great they were, so I decided to give them a try, and I remember the first time I used one on a bear bait. As soon as I stopped the boat on the river, the swarms came out, and I had about had it by the time I sat down on the stand. After the ThermaCELL got heated up, however, things changed. After about 10 minutes, it was as if there wasn’t a single mosquito in the woods! I was sold then and there, and since then I have never had to wear even a head net while sitting on a stand, something that was unheard of before.

ThermaCELLs have really improved the quality of my time hunting black bears, as I don’t have to strain to see through netting or worry about that one gap between my shirt and pants where they would find a way in and bleed me out. When bowhunting, especially, it’s nice to be free of any excess bulky clothing and be able to focus completely on the shot. Also, after taking a bear, they make skinning them in the field much more tolerable. Mosquitoes swarm bears just as much or more than they do people, so to skin one pre-ThermaCELL was like working with radioactive waste.

If you do any type of still or stand hunting where there are a lot of mosquitoes, I recommend you get one..or two..or five. It might seem like a silly thing to put so much emphasis on, but the Thermacell is a piece of gear that I will never again go black bear hunting without.