Fishing for Halibut, Lingcod, and Sea Bass off Afognak Island

Forget about the Florida Keys and Venice, Louisiana. Alaska’s Afognak Island offers the greatest saltwater fishing on the planet (at... 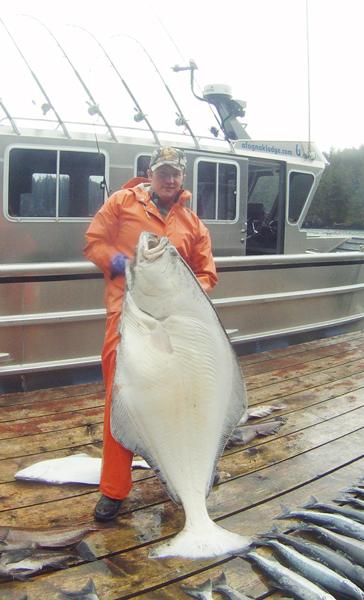 Forget about the Florida Keys and Venice, Louisiana. Alaska’s Afognak Island offers the greatest saltwater fishing on the planet (at least in my opinion). So with a little time off of work for the Fourth of July, I made my waydown to Afognak Wilderness Lodge for the first time during the summer months.

I wasn’t quite sure what I was in for, since I’ve seen Afognak only in the winter. I arrived at the Kodiak airport at 7:30 a.m. and had to rush over to the floatplane dock just in time to jump on a Beaver bound for Seal Bay. For what was supposed to be a relaxing trip, I was moving fast! As soon as we landed, I hauled my bags up the ramp, shoveled down a plate-full of breakfast, grabbed a set of rain gear, and then hit the water in search of halibut and lingcod.

After only about 45 minutes of running in the boat, we were on the fish. We found a spot where the whales were churning up baitfish while hundreds of birds hit the water. The sounder was going nuts, so we dropped our jigs and I started pulling up fish nearly as fast as I could get my jig back down to the bottom. We were slaying not only halibut and lingcod, but sea bass (black rockfish) too!

A 60-pound halibut was quite the change from the grayling fishing I had just been enjoying weeks before. The most effective lure for medium-small halibut, lingcod, and especially bass was just a simple lead, fish-shaped weight with a single treble hook. All of these fish species are extremely aggressive, and when we were in them thick, I couldn’t even get my lure to the bottom. They would hit it as it was falling. As soon as the line went slack, I’d pop the bail and set the hook.

That first day we caught more than 70 fish between the two boats, and we kept it up all week. I ended up catching one 150-pounder, one 80-pounder, and a pile of 30-pound halibut, as well as piles of lingcod, bass, and sockeye salmon. Fishing was only part of the experience, though. Afognak is such a beautiful place, with more wildlife than you can shake a stick at, including otters, seals, sea lions, whales, puffins, eagles, bears, foxes, deer, and elk, just to name a few.

That, in addition to spending the Fourth of July with some great friends, made it a memorable trip for sure. I can’t wait to go back. See more photos of my Afognak Island fishing trip.