Bull Down on Solo Alaska Moose Hunt … Now What?

As most of you can probably relate, work too often gets in the way of the hunting I would much... 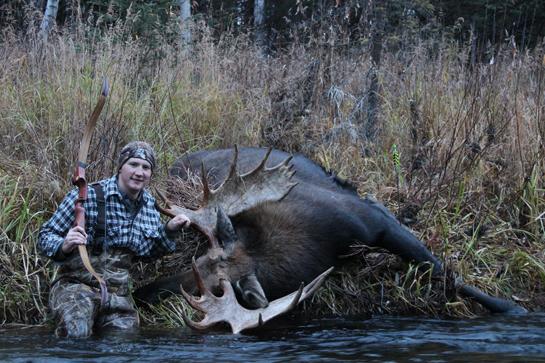 As most of you can probably relate, work too often gets in the way of the hunting I would much rather be doing, and from the day I got back from my Chugach goat hunt, it was 60- to 70-hour work weeks with little hope of escape. All summer I had been looking forward to hunting the late bow season for moose, during which my dad and I took a nice meat bull last year. It wasn’t looking like I would get much time to hunt it this year, but I was finally able to sneak away the last three days of September. After throwing some gear together, I headed up to dump my boat in the river.

I was riding solo this trip, but excited to get out and do some calling for a couple days. That time of year, the bulls are fully in the rut and very responsive. I even brought a set of plywood antlers that my dad had made to use as a decoy. You can put them in a spruce tree to draw a bull into range and keep his attention long enough to get a shot off. First things first, I had to actually make it to my camp. The stretch of river to camp is sketchy-at-best to run in a jet boat, and with the water being low, it was pretty intense. Not only is the river small, but in many spots there are underwater logs, overhanging logs we call sweepers, and spots where the only water deep enough for the boat is just a little wider than the boat itself.

I had been running for about 45 minutes, and was only about a mile from the spot I wanted to camp when I came around a corner and there was a bull standing in a small slough right next to the river. My first thought was, “That’s a nice bull! And he’s not moving!” By the time I cut the throttle and was idling, he was only 50 yards away and just standing there broadside staring right at me. The water was shallow, but I had to pull over to the opposite side of the river to beach my boat. I kept an eye on the bull as I dragged my boat up on the bank and pulled out my recurve.

I slowly waded back across the river in his direction, grunting at him the whole time, and he still didn’t move. I was at 40 yards when he turned his head. It looked like he was getting ready to bolt, so I drew my bow, held high behind his shoulder and loosed the arrow. Unfortunately, it didn’t drop as much as I thought it would, and the arrow hit him high, right where I was aiming. The bull took a few steps out of the slough and stopped, quartering away, looking around as if he didn’t know what had happened. I quickly nocked another arrow and buried the next one right into the back of his ribs. He took a few steps and spun around in circles, then stopped, quartering away again. I put another arrow in his ribs and he ran a few steps and stopped again, still looking like he had no idea what was going on. I walked up closer and put yet another arrow in his ribs and he did the same thing! I had considered bringing extra arrows, but didn’t really think I would get a shot at a moose, and ended up only bringing five. I was now down to my last arrow, so I walked up to about 20 yards and hit him in the lungs a fourth time. This time, he trotted off about 30 yards upstream along the bank and stood there coughing up blood.

With all of my arrows now in the moose, I walked back to the boat to let them take effect. All but the first were lung shots, but I was surprised that it took a few minutes for him to finally go down. In classic moose fashion, he used his last few steps to try and jump in the river, ultimately collapsing with his nose in the water.

With the light fading fast, I knew I was in for it. I hadn’t brought a come-along winch to pull the moose up to a flat spot, either, so cleaning him would be a chore. I tied his hind leg off to a tree to keep him from falling in the river and got to work. As I was working by the light of my headlamp, waist-deep in water and elbows-deep in moose blood, I kept hearing something back in the woods. I thought it could be a bear, but with my .357 up on the bank, all I could do was keep working and hope whatever it was didn’t get too brave. After about 5 hours, I had the bull quartered and bagged and I waded the 75 yards downstream to my boat to set up my tent. I made a cup of coffee to warm up, started a fire to dry off (my waders aren’t as seaworthy as they used to be), and hit the sack around 1:00 a.m.

I woke up at first light, about 6:00 a.m., drank some coffee, and headed back over to my moose. Sure enough, it was a bear I had heard, and he had torn up all of my game bags, dragged my meat in the dirt, and just made a mess of all my hard work. With nothing to keep the gathering ravens off of my meat, I pulled my boat up in the narrow channel right to where the moose had fallen. I was lucky to not have to pack it anywhere, but getting it out would be puckering, nonetheless. The small channel was about three feet deep, but there was a gravel bar six inches below the surface about a boatlength in front of my boat. I had to get the boat throttled up and holding in the current, untie it, and hammer the throttle to get on step and over the gravel bar.

I made two trips back to the truck to get the whole moose and my gear out, and it was anything but boring. In one spot, I stopped paying attention for about five seconds, took the wrong channel, and broke the reverse gate off of my jet unit. Then, I managed to fall in the river twice. The first time, I had just finished helping to pull a disabled boat out that was pinned against a log that had dropped into the river. They had been floating downstream and the current had them pushed against the stump, almost swamping the boat. After freeing them, I was pulling my boat out into the current and slipped.

Even with my chest waders, my shirt and jacket were soaked. I had an extra sweater, so I donned that. The second time, I had stopped to have coffee with a couple other hunters camped on the river, and was again pulling my boat back into the current. It was a spot where I had to get my jet in deep enough water so it didn’t suck up gravel, get the boat idling, then jump in and take off. I gave too much throttle, and the boat pulled me off of my feet–pretty cold and embarrassing. Fortunately, that was the worst of it, and I was on my way home to a dry set of clothes by early afternoon. Although my hunt was over before it started, I’m not one to turn down luck. It was a lot of fun, and I was really lucky to be able to take a nice bull with my recurve.