Live Hunt Alaska: Fishing for Silver Salmon in the Interior

If you’ve spent much time in interior Alaska, you’re aware that the seasons go from full on summer to full... 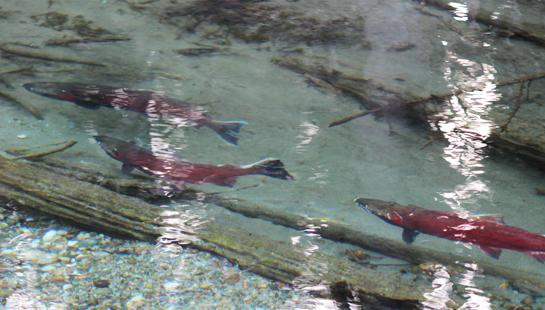 If you’ve spent much time in interior Alaska, you’re aware that the seasons go from full on summer to full on winter in a matter of only a few weeks. On one of the last weekends before the snow hit, my buddy JR and I took my boat out on the river for one last hurrah.

I had just fixed my jet unit after battering it while I was hauling my moose out of the bush, so I just couldn’t stand putting it away without one last good trip. This time we were in pursuit of the late-running coho salmon, or silvers as we call them.

After their long swim up the Yukon river, the silvers finally make it to their spawning grounds beginning in late September. By the time they get here, they aren’t the vigorous fighters they are in the ocean, and aren’t very good to eat, but they’re still a blast to catch. We took to a crystal-clear river dressed more for snowmobiling than boating, but it was chock full of fish, so we knew it would be a good day.

Before we got going, we had to spend half an hour letting my throttle thaw out and getting my steering cable broke loose. It was about 18 degrees and the moisture in my steering cable had frozen it solid! Soon enough, though, we were on our way, and shouting and pointing like kids as we zipped over schools of salmon. After a few minutes, we found a good spot to tie off, and we were catching fish in no time. We were fishing out of the boat using lures we call wiggle warts, which are basically just a shiny rattling crank bait.

Although the fish aren’t really feeding at this point in their journey, they are still very aggressive. The wiggle wart is a pretty obnoxious lure, and our basic technique was to pull it upstream past the salmon or hold it in the current right in front of them. There weren’t very many that could keep from biting it!

After pulling in 10 or 15 fish from this spot we pushed farther up river, and after only a few bends upstream we passed over a hole that had to have at least 200 salmon in it. We anchored up and started reeling them in almost every cast. After awhile we had to take a break for a cup of coffee and to break the ice off the guides on our fishing rods. We spent quite a bit of time just sitting there watching the salmon all around and under the boat. It’s easy for me to take this stuff for granted, living in a place like this, but just being out there is an amazing experience every time.

It turned out to be a great last run on the boat for the year. We caught and released about 50 salmon, and we were thankful to spend another day out enjoying Alaska.