It’s no secret that The Last Frontier is a land of trappers, but some guys take it to a whole... 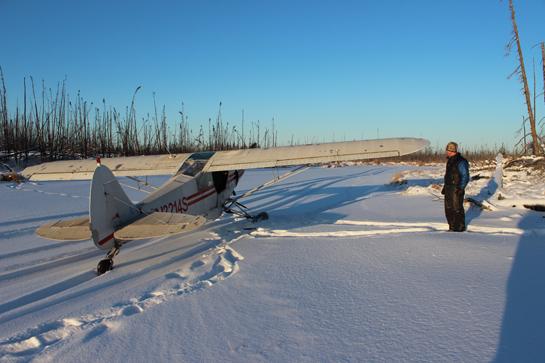 It’s no secret that The Last Frontier is a land of trappers, but some guys take it to a whole different level. Most trappers here in Alaska trap off of their snow machine, getting access to some of the most remote places in the state. However, there is a monumental amount of work involved, especially when you are cutting your own trail like I do.

This still leaves the majority of the state completely inaccessible for trapping–or does it? There are a number of guys who trap completely out of their airplanes. All they need is a lake, river, clearing, or slough long enough to land on and take off from on skis, and they can get into completely untouched country. I know of a couple guys who trap martens full-time out of their planes, and can catch as many as 500 martens in a year. With today’s auction prices sometimes reaching more than $130 per marten, this kind of trapping can really pay.

Most guys trap for the fun of it more than anything, and I recently got the opportunity to ride along with my friend Mike to check a few of his traps. It was quite a neat experience riding around in the back of his Super Cub at thirty below zero. Trapping out of a plane allows the trappers who do it to cover a ton of country, and really see the travel patterns of animals. The wolf trapper, for example, can find where a pack is hanging out and have a much better chance of spotting kill sites, which are the best places to set for wolves.

Although it has some really cool advantages, trapping out of an airplane also has disadvantages. Since there has to be a safe place to land, it limits the places you can set traps. Also, animals will sometimes follow your snowmachine trail, walking right to your sets; airplane trapping is a little more random.

All Mike had caught the day I went with him was an ermine, but we got some new lynx sets out and had a lot of fun following wolf tracks. For the lynx sets, we would cruise low until we found a pond or slough with lots of lynx tracks, then land and set the traps. On the way back,we saw a pretty red fox, who comically tried to hide under a single willow branch thinking we wouldn’t see him.

Not many people trap out of an airplane, and it will be a few years before I will even have my own plane, but it was a really cool experience to get out there with Mike and see how it’s done. It gives a person an overwhelming sense of freedom to be able to go basically wherever you want. Many of us here in Alaska fully embrace the freedoms we have, and I’ve now added “airplane trapping” to my list of reasons why I love living in Alaska.