Trapping in Alaska: First Wolf of 2013

If there is an epitome of trapping, it is the pursuit of the wolf. There are few creatures as intelligent,... 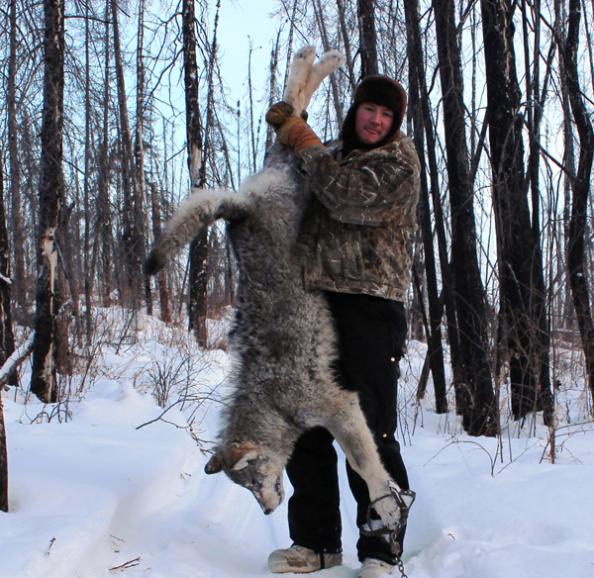 If there is an epitome of trapping, it is the pursuit of the wolf. There are few creatures as intelligent, wily, and powerful as the wolf, and here in Alaska I have the unique opportunity to play my cards with them every winter. Last season I only managed to catch one, but this year is off to a good start.

A pack of wolves–the same pack from which I caught the black one last year–returned to my marten trap line a few weeks ago. I saw their tracks at the beginning of the season, but I wanted to pattern them, and nearly eight weeks passed before they were back. One of the challenging things about trapping wolves is the mental side of it. I knew that these wolves would probably come back, and had a good idea of where they should return, but I had my doubts. I waited to see what would happen, and when they did come back, it was in the exact spot where they jumped on my trail last year. The next weekend I set out about 18 snares and a handful of Alaskan #9 legholds, and spent a lot of time at work daydreaming about how things would go down.

There was a spot in their trail where the wolves split up to go through a small stand of trees, so I snared every secondary trail, hoping to snag at least two right off the bat. I knew that if I could catch either the alpha wolf, I would have a good chance at catching the whole pack, as they would mill around if the leader became snared. Several weeks went by with no action, and last week we had a spell of warm weather and some freezing rain. Something told me I had to get up there to reset and check my gear, but I couldn’t get the time off from work.

Saturday morning I was winding up the trail when I saw the unmistakable tracks that told me they were back. This time, the pack didn’t use their normal route, but had gotten on my snowmachine trail lower on the hill. I still was optimistic, though, and as I rode into where my first sets were, I stopped. There was nothing in my first set of snares, but when I looked up the hill I saw a wolf standing, caught in one of my legholds. I quickly checked each set, until I reached the one that had nabbed him. It was a snowmachine trail set, just like the one I did a video on how to trap a wolf last winter.

It turned out that he was the only one I’d caught, and he was one of the pack’s young sub-males. Still, it was a wolf, and although I’ve been in my fair share of exciting woods experiences, there is nothing like seeing that you’ve actually caught a wolf. It didn’t work out like I’d hoped, but wolves are like that. They often will do what you least expect them to, and getting just one to step on a 3-inch pan in the middle of miles of wilderness is an accomplishment for any trapper. I still have a couple of months to try my wits against the rest of the pack, which is now smarter, but that’s what really makes wolf trapping fun. Stay tuned, and I’ll keep you updated on how the the remainder of the season unfolds!