A Bear for My Wife

One of things I repeatedly heard as my wedding day approached was, “You’re done hunting now.” Fortunately I found the... 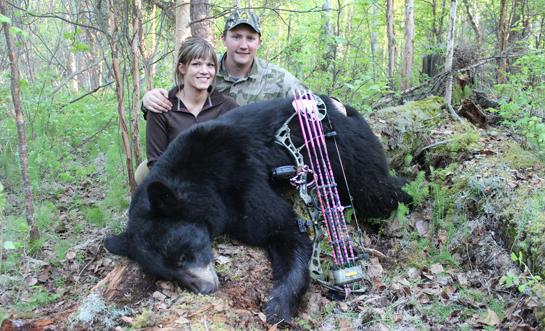 One of things I repeatedly heard as my wedding day approached was, “You’re done hunting now.” Fortunately I found the right girl, and that oft-repeated bit of wisdom couldn’t be farther from the truth. Last Christmas I bought my wife-to-be her first bow. She had never even shot one before, but in no time, she was drilling arrows with a 50-pound draw weight as well as the average archer. My primary goal this spring was to help her get her first bear with her bow. Growing up, she spent many nights on the bear stand with her brothers, but never got the chance to pull the trigger. The beginning of June finally brought her chance.

The first night on the stand looked very promising. Faith and I checked my camera, and there had been two nice black bears on the bait when we pulled up in the boat. After settling into our treestands, we only had to wait about 20 minutes before the smaller of the two came back to the bait. At first I was questioning how big he was, but after he camped out right below our stands, even tried to climb my tree, I figured him to be about 6 feet–a nice boar. When he presented a shot, I motioned for her to go ahead, and she put an arrow right behind his shoulder. He took off, and we gave him about 20 minutes. We looked for him for three hours but couldn’t find the bear. After calling it a night, we looked at the video footage and saw that the arrow achieved very little penetration. We returned in the morning and found some blood and followed it for about half a mile before the trail petered out. I’m pretty certain that bear was left with nothing more than a sore rib.

I’ve had issues with penetration with short, three-blade broadheads in the past, but I didn’t think it would be an issue with her compound. I was wrong, so I decided to try out the Grizzly two-blade broadheads that I use with my recurve. They flew perfectly, and sank into the target nearly twice as far as the three-blade points had. With some sight tweaking, we were ready to go out again.

We climbed back in the stand a couple nights later, and after only about an hour a big boar came in to the bait. I knew he was a shooter right off the bat, and we let the bear settle down and relax. He soon turned broadside and Faith made the exact same perfect shot, the arrow zipping right through the bear. He took off the way he had come, and after covering about 30 yards, he started walking, then tipped over. He’s a very nice boar, and squared 6 feet 7 inches. I was so proud to watch my wife take her first bear, and not get too discouraged after what happened the first night. She may have had to let her brothers shoot the bears in the past, but she’s the first of her siblings to take one with a bow.