We’re all familiar with the phrase “if it ain’t broke, don’t fix it,” but that doesn’t seem to be a... 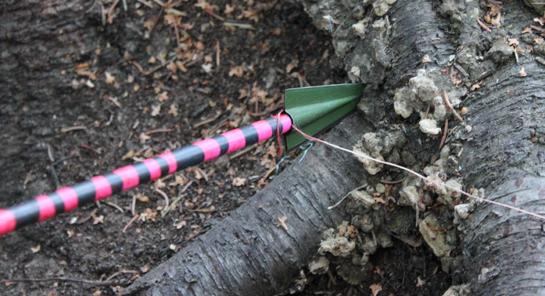 We’re all familiar with the phrase “if it ain’t broke, don’t fix it,” but that doesn’t seem to be a maxim that broadhead makers adhere to. For years now, every new batch of broadheads is packed with more blades, each meaner looking than the last. But I’m not convinced that they are any better.

This spring, my wife was shooting a common three-blade broadhead out of her 50-pound compound for black bear, and although her shot placement was perfect, the arrow achieved hardly any penetration and didn’t kill the bear. This reminded me of the first bear I killed with a bow, a long bow, using the same broadheads. Although I got enough penetration (barely) to hit both lungs, I was not very impressed. After two incidents of bad penetration, it was time to switch things up.

I swapped my wife’s broadheads with the Grizzly single-bevel two-blade points I’ve had very good results with. Although they are intended for traditional bows, these broadheads flew very well out of her bow, only requiring a little sight adjusting. The next night out, she made an identical shot to the one with the three-blade and got a complete pass through. Now, there are a lot of factors in a shot, but every animal I have seen shot with the Grizzlies (with the exception of moose) have been complete penetrations.

There are two main factors that I believe contribute to penetration (assuming same arrows out of the same bow): The number of blades and the angle of the cutting surface. The steep cutting surface that is common on most modern broadheads is detrimental to penetration because the larger cutting surface in a shorter package causes more drag. The number of blades is just as important in my opinion. Back when I was a compound shooter, all of my arrows were straight-fletched, and didn’t have much spin, but many shooters (my wife included) use a helical fletch on compounds now, as has been done with traditional bows for years. This type of fletching increases arrow spin and improves flight. I believe arrow flight was one reason the three-bladers became popular. They fly much better in front of a straight fletch, while two-blade broadheads will plane off in bogus directions. The problem with using three-bladers and helical fletching is that the more blades on a broadhead that is spinning, the more torsional resistance there will be to slow the arrow down. The penetration of three- and four-blade broadheads, particularly, seems to be slowed dramatically when used with a helical fletch.

The nice thing about an older style two-blade broadhead, especially with a single bevel that cuts in the direction of spin, is that the torsional resistance seems to play much less of a factor. While testing my wife’s bow, the arrows with the Grizzlies penetrated nearly twice as far into the target as the three-blade points.

Although this isn’t an exact science, and there are lots of factors like game size, arrow velocity, shot placement, and many others involved in the performance, it is pretty clear that two-blade head penetrate better than those with three or four. And in my experience, they cut just as big of a hole. With the heavy, super-fast compounds, this doesn’t really matter on medium-sized game like deer, but I would be comfortable saying that for traditional bows, and compounds at 50 pounds or less, it would be very worth going old school. With a little tuning, I bet you can get them to fly as well or better than three-blade designs, and you’ll be very pleased with the penetration results.