In many ways, spring gobbler hunting circa 1984 bears little resemblance to turkey hunting today. Back then, decoys were not... 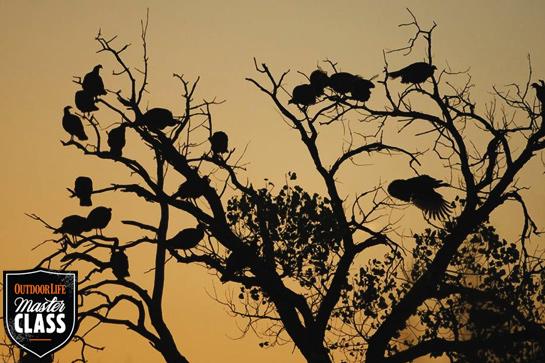 In many ways, spring gobbler hunting circa 1984 bears little resemblance to turkey hunting today. Back then, decoys were not part of the picture, turkey vests had yet to become fashionable and no one in his right mind would have considered using a gobble tube to call up a tom–that is, if the gobble tube had even been invented. It was a time when making a gobbler sound off on the roost in the evening could be as simple as slamming the car door.

In fact, when Outdoor Life Field Editor Charlie Elliot wrote about exactly that in an article back then, hunters around the country copied the grandfather of modern-day turkey hunting. Car doors slammed along back roads from the heart of Dixie to New York’s Catskills–and birds gobbled in response. Nowadays, spring toms are a lot more reluctant to gobble out their evening roost locations.

So what do you have to do to roost a bird in the evening for the next morning’s hunt? Here are a few ideas for locating longbeards….

1) Aggressive Roosting
The goal: Locating a bird to hunt the next morning, along with multiple backup gobblers in case the duel at dawn doesn’t work out.

The plan: Check as many prospective hunting areas as possible during that magical last half-hour of daylight. Because I need to cover about 30 miles on my roosting route, I almost always ride backroads by vehicle, stopping every quarter-mile or so to call. I have no doubt that I miss some shutmouth longbeards along the way, but I’m confident that I’ll manage to strike a bird or two.

The calls: Owl hooting was once the primary call used for roosting turkeys, but today all manner of calls, from pileated woodpeckers to coyote howlers to gobble tubes, are used in an effort to make birds gobble. Although I’ve tried them all at one time or another, my favorite roosting call is an oversize boat paddle box call. I’ll start with an eight-yelp series and listen for a bit. If I get no response, I’ll cutt hard and then fade into a series of yelps. It’s been my experience that birds will respond quickly. If not, I move on to the next roost site.

Hunt prep: There are four essential pieces of information to be gained: Where the turkey is; where he’s going; how you can sneak to within 75 yards of him the next morning; and his temperature, which provides a sense of his vulnerability. If the bird sounds off instantly, he’s hot and more likely to come in quickly.

2) Cut Him Off At the Pass
The goal: Getting to where a gobbler is going before he gets there–a simple chore where fields are involved, a bit more difficult in hill country.

The plan: On some evenings, especially when rain, wind or worse hampers your ability to hear birds on the roost, it’s necessary to use what you learned while scouting. That’s why on several spring scouting trips, I leave the calls at home and simply listen for birds at first and last light in the hope of learning their daily travel patterns.

On most mornings, you will hear gobblers fly down and make their way to a strut zone or other spot where they can be seen by potential mates. Often, toms will gobble regularly en route.

Try to follow the gobbling from a distance without spooking the bird. Plot the bird’s course with a GPS and, later, mark the gobbler’s exact path on a topo map or aerial photo. Get back to the roost site in the evening to check the bird. In a day or two of listening, you’ll have a fairly good idea of what that gobbler is doing on a regular basis.

The calls: Again, leave the turkey calls at home when heading out on a patterning scouting trip. If anything, slip a crow call in your pocket to elicit shock gobbles from your bird if the mid-morning woods grow silent. Use it sparingly.

Hunt prep: It’s been said that good woodsmanship will kill more turkeys than good calling any day of the week. That’s debatable. But when spring birds are afflicted with lockbeak on the roost–either on the evening before your hunt or the morning of your hunt–use your knowledge of gobbler patterns to fill your tag. Rely on your maps and GPS coordinates in an effort to get out ahead of the bird. Set up in his strut zone and just wait him out.

3) Risky Business
The goal: Separating an adult gobbler from his hens.
The plan: If your tom’s not gobbling because he’s henned up, you’ve got two choices–wait until he’s done servicing his hens, or bust them up fall-turkey-style (check your state’s regulations first). This strategy is risky no matter where you try it. In Rio Grande country, this move can ruin a roost site for the entire season, and can get you banished by the landowner. But when time is winding down, this dicey option might be your best chance.

The calls: You won’t need much to bust up birds; calling up a spooked gobbler is another matter. Go with the soft stuff–push-buttons, slates–and stake out a couple of decoys. Your gobbler might not do much gobbling on his way in, or he might tear it up. Give him what he wants to hear.
**
Hunt prep:** Your best bet is to wait near his roost site in late afternoon. Once you’ve heard him fly up, simply walk through the roosting area to scatter the birds. If he flies off, head that way the next morning. Don’t press him too hard and don’t risk flushing him again. Set out a hen decoy or two and listen. Start out with soft clucks. If he doesn’t gobble, sit tight and call sparingly.